How commodity is something?

tl;dr There are a number of different ways you can refine your maps but in most cases, it's rare that you should go beyond aggregated views. Most of the benefit can be gained by a group of people sitting around sharing and discussing the map

Evolution
Everything (whether activities, practices, data or knowledge) evolves through the application of competition (supply and demand side). Each instance of an evolving act diffuses through a market over time and hence evolution can be seen as a series of diffusion curves (often many hundreds) with each diffusion curve having its own chasm.

Those diffusion curves however have different markets and different time spans i.e. diffusion of the first phones was not the same as diffusion of later, more evolved, more mature phones. So when examining an act (A) which is evolving through ever more mature examples of the act (A1 to A5) then you see a diffusion patterns that looks like figure 1.

Figure 1 - Diffusion of an activity A 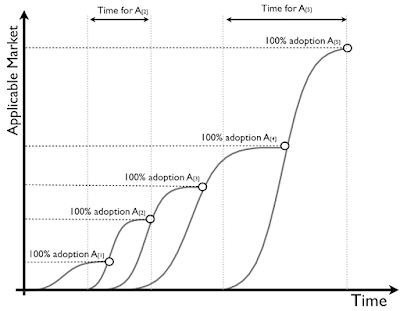 At any moment in time in the market you may have many examples of the act in existence i.e. older phones to modern phones to the latest phone can all exist in the market at the same time. You cannot simply look at a market and see 50% of households having something and make a claim over how evolved it is. Whilst evolution contains many diffusion curves, evolution does not equal diffusion and you don't know which diffusion curve you're on.

However, there is a pattern to evolution which you can measure by examining the ubiquity and the certainty (i.e. maturity and completeness) of a thing. Unfortunately, the measurement can only be done for the past. Something has to become a commodity before its past can be measured accurately. This means that whilst I know the direction of travel of something (e.g. the genesis of an act becomes custom built becomes product becomes a commodity - see figure 2), I can not directly measure where something is but only where it was. 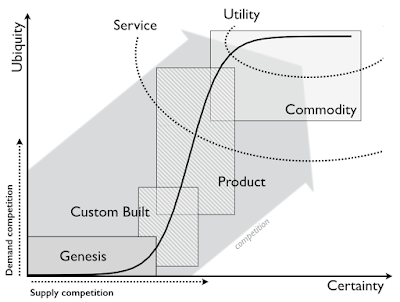 The reason for this is certainty axis itself and the role of individual actors in the market. I can only say where something is with certainty once it becomes certain. The future unfortunately acts as an information barrier and until something has become certain (and I can therefore measure its past) then I have to guess unless I invoke some form of crystal ball.

Now this evolution curve provides the x-axis used in mapping. So, how do I know where to place something (e.g. activity A) on the x-axis if I can't measure it? (see figure 3). 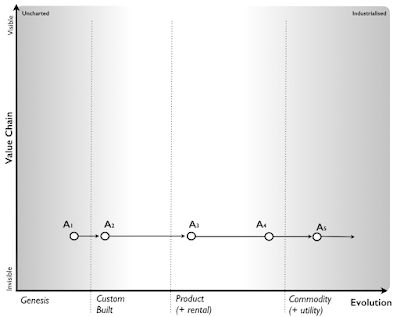 There are a number of techniques you can use.

Ask yourself what this thing is.
The first step is to ask yourself is this thing :-
a) rare and poorly understood i.e. genesis?
b) uncommon and somewhat understood, normally provided by custom built examples often built by consultants?
c) quite common and reasonably understood, often provided as product or rental service through product vendors?
d) well understood and ubiquitous provided via utility services or as undifferentiated commodities?

If you take a number of people (say 2-4) with experience of the field then you can get a better answer by asking the group. This is also helps when there's arguments because that usually signals the act consists of several components at different stages of evolution. 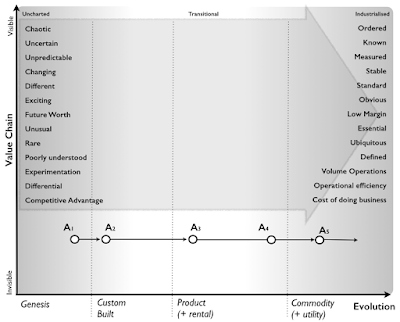 Hence look at the activity for example and ask yourself :- Is this rapidly changing? Is this a differential? Is this exciting? Is it stable? Does it seems chaotic? Is this well defined? Am I experimenting? etc.

Look at other maps.
Obviously everyone has bias, hence ideally you should use a group to determine how evolved something is. However, if you have several maps then you can use a aggregated view (i.e. a summary of common points on different maps) to determine how this thing should be treated. You do this by looking for clusters in order to remove bias (see figure 5). 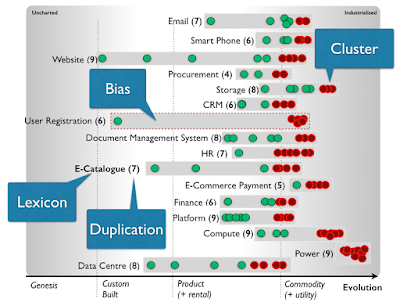 The above graphic is a great way of removing duplication in an organisation and stopping groups from custom building the sort of thing which should be a commodity e.g. user registration

Look at publication types.
At this point I'd probably say you're going overboard. You don't need to get maps this accurate in order for them to be useful tools for organisational learning, collaboration, communication, scenario planning and strategic gameplay. However, if you want to go the extra mile then start examining the publication types (see figure 6). 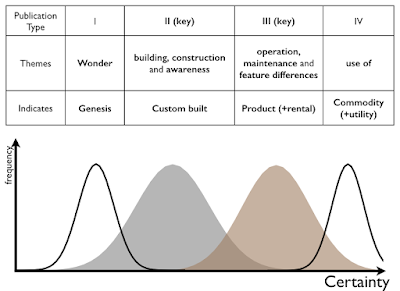 E.g. examine the frequency of different key publication types to determine roughly where you are. Please note, even this measure is rough until the act has become well defined (i.e. certain) and in which case the volume of publication types can be used to determine where it was (past tense) on the certainty axis. However, you can use this as a weak signal but I mostly use this in anticipating future change.

Signals
At this point you're definitely going overboard and trying to create a perfect map. Don't bother, your map will change and you shouldn't spend more than a few hours to a day creating it. The only time you should be stepping into weak signals is when you're into anticipating a very specific change and working out when to roughly attack a market.

There are a number of signals that can be used, for example when crossing a boundary you need to overcome inertia and that requires a number of factors to be in place - concept, suitability, technology and attitude.

For example in figure 7, we have an evolving act and every time it evolves from one stage (e.g. custom) to another (e.g. product) and hence crosses a boundary then there's inertia to the change created by the incumbent group. Hence the originator (for genesis to custom), consultants (for custom to product) and product vendors (for product to commodity) all resist a change that impacts their market. The size of the inertia barrier increases as the act becomes more evolved (and more established). 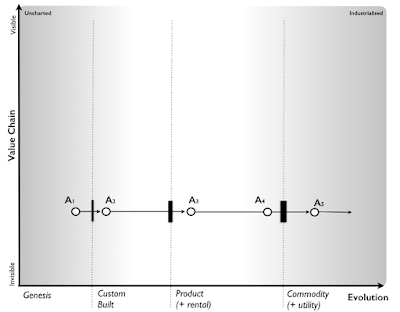 In order to overcome an inertia barrier you need the four factors in place. The concept of providing the act in the next stage must exist. It has to be suitable (i.e. widespread and defined enough). The technology to achieve this must exist and finally there must be an attitude of acceptance for such a change by the customers. The latter is normally represented by the customers being dissatisfied with the existing arrangement.

You can go further into weak signals, for example the rate at which higher order systems can be built from lower components accelerates as the underlying systems become more industrialised. You can even use timing based upon common economic cycles such as peace, war and wonder (see figure 8). However, these are overkill for a simple mapping exercise and are more suitable when directing an attack. 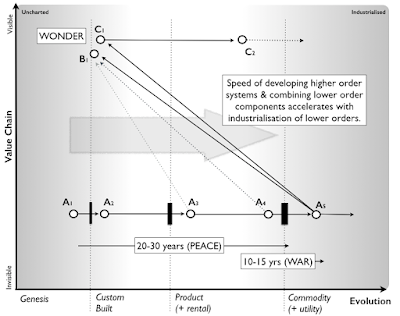 There are a number of different ways you can refine your maps but in most cases, it's rare that you should go beyond aggregated views. Most of the benefit can be gained by a group of people sitting around sharing and discussing the map.
Posted by swardley at 6:03 pm