Somethings are different, some remain the same.

Back in 2011, I published a population study of companies showing that a next generation of company seemed to be emerging with a different phenotype. Details of this can be found here. I've summarised the main changes in table 1.

Table 1 - Differences between Traditional vs Next Generation. 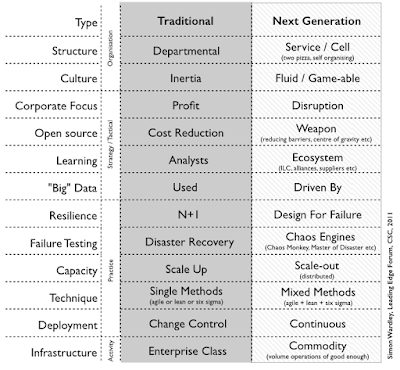 Table 2 - Similarities between Traditional vs Next Generation. 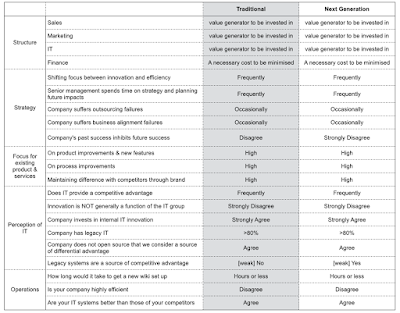 I mention this because I've noticed a tendency of people to bundle all sorts of characteristics under the title "digital" and claim fairly definitively that this is the future of the firm. Before embarking on such exercises, I would suggest that you understand both the concepts of evolution & co-evolution, along with common repeating economic patterns that tend to form new organisational structures and then do some population studies to confirm / reject your hypothesis across numerous characteristics. Once you've done this, you now have to wait many years to see if a characteristic turns out to be a pointless fad or the consequence of an echo chamber (i.e. it won't become supported in the wider environment).

Whether it's social media to blogging CEOs to culture to structure to adoption of specific methods then there's quite a few trendy ideas which seem to be on questionable grounds. I'm not saying these things aren't without any merit and certainly we should experiment but that's a far cry from picking a characteristic from a couple of "leading companies" and declaring it as the future of all firms. You need to be wary of backward causality and just because Uber uses "surge pricing" then that doesn't mean it's the future of all.

What my study showed was whilst there were differences, there were many more similarities between the traditional and the next generation. As time passes, the traditional will adapt even on the small number of characteristics that showed any significant difference. Of course for me that's important because in a decade or so time, I'll be able to go back and confirm whether a next generation did truly emerge or was it some other aberration.