The art of strategy ... it doesn't matter.

Strategy is fundamentally about answering the question of "Why?"

But "Why" is a relative statement as in "Why here over there?"

But "Here over there?" requires you to understand "Where you could attack"

And this requires situational awareness.

The process of strategy is inherently iterative. You start by roughly understanding your purpose including your scope, how you interact with others and your users. You then expand into situational awareness by understanding your users' needs, your value chains and their context (i.e. a map of the environment). You then apply doctrine including tactical approaches such as removing duplication, bias, improving flow and using appropriate methods. You learn about the environment, your competitors, the common repeatable economic patterns and forms of gameplay. You structure yourself around this including your capabilities.

You then set a direction through a mixture of anticipation and scenario planning and through acting you refine your purpose, your situational awareness, your use of doctrine and your learning. You constantly repeat this process of observing (purpose, situational awareness including the landscape and climatic patterns impacting this), orientating around the landscape (doctrine), decision (strategic play) and action. This is summarised in figure 1. 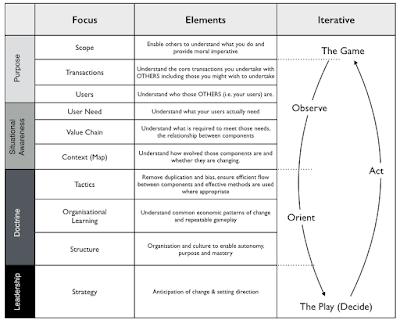 Except you probably don't live in that sort of organisation, there's less than a 0.5% chance that you do. For most of you, I can happily describe your organisation without even meeting you.

Your process of strategy (if you're in the Tech industry) is more likely to be akin to figure 2 (even though this is said in jest). Though you'll probably deny it due to the considerable amount of effort and time expended on this, you'll add in a few more steps, write a business case, create a SWOT, mention something about capabilities and justify to yourself that it works. 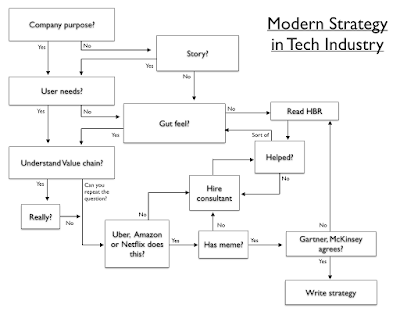 Without situational awareness then you are simply waiting around for some company to take an interest in your space and then take you out. Fortunately your competitors are usually in the same boat and so ... the art of strategy ... it doesn't matter. Focus on execution, work on gut feel, copy those memes, listen to the analysts, get yourself in their magic quadrants, sell a good story, focus on your vague notions of culture (or at least tell everyone that's really important to you) and run away from those competitors that you suspect play a different game.

As long as you build a product that is vaguely useful then you can survive for a considerable amount of time on gut feel, copying others and just by executing well. It's ok to suck as long as your competitors do. However, just because the art of strategy doesn't matter that much today, that doesn't mean it won't matter tomorrow. Slowly but surely, there are signs that companies are getting better at this. As more adapt then it'll become harder to survive just by copying the memes of others.
Posted by swardley at 8:15 pm