The continued search for Spime Script

Back in 2006, I gave a talk on the likely development of a future language - Spime Script - that would encode both digital and physical structure. This would enable a developer to describe the function of something and allow a compiler to determine what should be expressed physically and what should be expressed digitally. In other words, I describe the function of a smart watch and a compiler expresses this through 3D printed physical form, printed electronics and digital code. The compiler decides what bits of the function are expressed in what form and it's the interaction of those forms that create the function we're looking for. I regularly keep an eye out for this and how the industry is progressing slowly in that direction.

A key part of this change is the development of hybrid printers capable of creating both physical form and electronic structure. There's a couple of things to note. According to weak signals then the span of time at which hybrid printing becomes industrialised (i.e. the printers become widespread, well understood and commodity like) should be around 2035-2040 - see table 1.

Table 1 - Point of Industrialisation (the war) 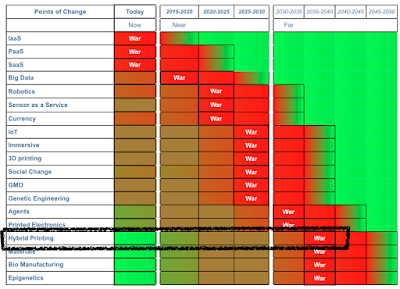 This might seem a long way off but we're only talking 20 years and this is bang on course for the current pace of evolution which stands at 20-30 years from genesis to point of industrialisation (post 2012). The first hybrid 3D printers capable of physical and electronic printing were circa 2006.

Now, I know everyone thinks that in this "digital" age that everything goes superfast but that's mainly an illusion created by the overlap of many points of industrialisation (the wars) across many activities and value chains. Yes, the pace of evolution accelerates with industrialisation of the means of communication to more commodity forms (printing press, postage stamp, telephone, the internet etc) and yes, it has recently accelerated from around 30-60 years to around 20-30 years but that's all. Do remember that the first 3D printer in a research setting was in 1967. We've got many rounds of product development for hybrid printers until they become widespread and well defined enough to become suitable for more industrial (i.e. commodity) provision.

1) A punctuated equilibrium as we move from product to more commodity forms. This means a non linear pattern of change, an exponential growth pattern. Hence in the first 5-10 years though the adoption will be exponential, by the end of a decade then these hybrid printers will only represent 3% -5% of the market (somewhere between 2040-2050). It's in the next five years in which they grow to 30%-50% of the market that catches everyone out.

3) A co-evolution of practice in the manufacturing industry i.e. new methods and new techniques based upon more industrialised provision.

4) Disruption of past vendors stuck behind inertia barriers i.e. existing incumbents in the manufacturing industry that are hampered by their existing business models, practices, political and financial capital and can't see the change until it's too late to react. The new entrants in this space almost always become the future giants.

There are many others characteristics but we'll leave it at those four.

The third thing to note is from the above list, the co-evolution of practice leading to new methods and new techniques. This is where Spime Script will come into play. An entire new development language that will compile to both physical and digital form. We'll probably even create a whole new meme for this change - I hope it isn't ManuOps or something daft.

Now, as with all such changes the seeds of change are set will in advance. Hence whilst SpimeScript (or whatever it's called) will emerge and then dominate this change impacting value chains everywhere circa 2035-2055, the origin of Spime Script will start much earlier.

When this change hits, have no doubt that its impact will be astronomical in terms of our quality of life and economics. This change impacts almost every value chain and it'll make cloud computing, the internet and most other things look like small potatoes. Everything we build and all the related industries and supply chains will alter. Basically, everything is impacted from agriculture to industry to services - from the cars you drive (or will be driven for you) to the house you live in to the gadgets you use.

Bizarrely, it looks like this change is going to hit at the same time when bio manufacturing and aspects of meta material science (other reasonably large changes) start to industrialise and so that period 2035-2040 is set to become rather spectacular, a time of notable 'wonder'. You'll have all forgotten about this "digital" stuff by then anyway and what's left of that will have become legacy.

So, in rough order

2015 - 2035 : we should see continued product development of hybrid printers including potential minor waves of disruption from product vs product substitution.
2035 - 2040 : we should see new entrants providing more industrialised forms of hybrid printers, an explosion of new activities built on this, co-evolution of practice including the rise of a new language (e.g. SpimeScript) and exponential change.
2040 - 2050 : the new entrants should achieve 3-5% of the market, a meme will exist for the new form of manufacturing, past incumbents will show visible signs of inertia and be generally dismissive.
2045 - 2055 : the new form of manufacturing will dominate all value chains, past incumbents will be disrupted.

Alas, by the end of this time, I'll be in my seventies at the youngest. So, there's every chance that I won't be around to see what should be one of the most spectacular changes in the history of mankind. Robots, drone, AI, big data ... bah humbug, small fry ... components of a much larger change that includes the entire process of how we make stuff.

Hence my interest in finding Spime Script earlier, it should be fascinating to watch it grow.

P.S on the off chance that you don't know what a Spime is then please go read Bruce Sterling's book.