Why most businesses aren't playing chess and aren't generals.

When you start playing chess, you quickly discover there's a lot of learning to be done from the rules, to the gameplay to even your competitors behaviour. What is absolutely central to this learning is the board itself.

When you look at a board, it has five basic characteristics which enable learning :-

1) It is visual. Though with play you tend to create a mental model and don't need to see the board
2) It is context specific i.e. the game in hand which enables us to learn from one game to another
3) It has an anchor which is the board itself which enables consistency
4) You have the position of pieces relative to the anchor i.e. position on the board
5) You can visualise movement. 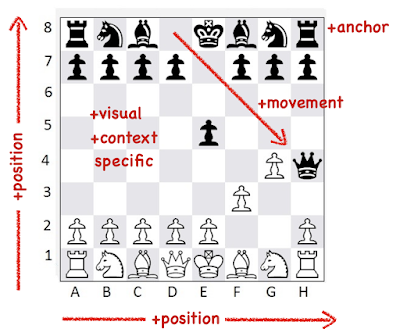 Now with these characteristics, you can even determine the rules of game by simply just playing it. However imagine an alternative view such as a box and wire diagram. 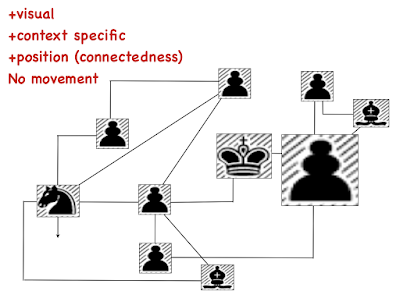 The diagram is certainly visual and context specific. It has a form of position (i.e. connectedness between pieces) though no anchor and no way of visualising movement. You cannot use such a diagram to effectively learn the rules of the game or even gameplay.

If two players met using these different forms then, well it should be obvious who will tend to win especially over time. 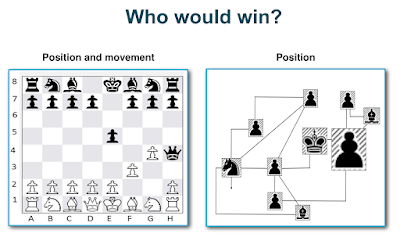 Now think of a military map. Again the same characteristics appear. It's visual, it's context specific (the battle at hand), it has position relative to an anchor (the compass) and you can visualise movement. 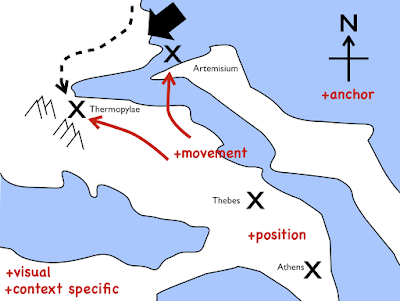 It's easy to navigate with the above and correct where the map is wrong i.e. head NW from Athens for a distance of 90 miles and you'll find Thebes is actually further west. You can improve the map and share with others.

The characteristics of the map also help us to learn forms of battle e.g. flanking movement, pincer, the use of landscape and force multipliers to name but a few. You could of course represent the environment in a different form e.g. 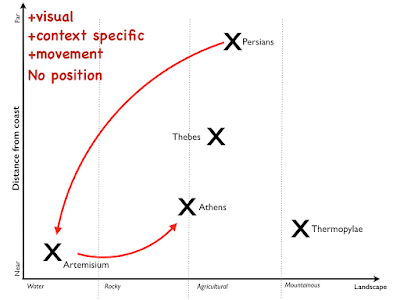 The above is certainly visual, it is context specific, it has movement but without a meaningful and consistent anchor then we have no real position. It's difficult to work out how to go from Athens to Thebes in the above diagram other than "move from slightly rocky to further from the coast and more agricultural". That could be in any direction and so we don't really understand the relationship between things. 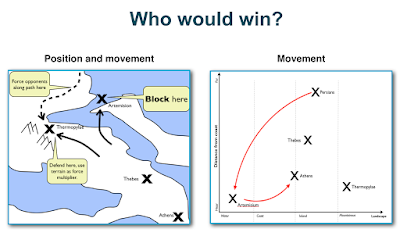 In both the chess and military map example, the difference between the two visualisations is the quality of situational awareness (i.e. our ability to understand the landscape, our competitors and anticipate change).

If you can visualise a context specific environment with both position and movement then you will have a higher quality of situational awareness than someone who cannot. You will be able to more effectively communicate and determine strategy, it will enable greater co-ordination and alignment but most importantly you will be able to learn context specific gameplay, universally applicable doctrine and the rules of the game more effectively.

When fighting those using a vastly lower quality of situational awareness then you will thrash opponents over and over. They'll spend most of their time trying to get their troops walking in the same direction assuming they can even work out what direction they should be heading.

If you look at an organisation, it's a melting point of people, activities, practices and data and to understand it you will need a visualisation that is context specific (not all organisations and markets are the same) with both position and movement. 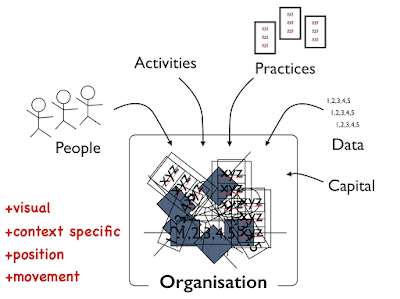 The purpose of a Wardley Map, is it gives you a means of visualising a context specific environment with position and movement. You have an anchor (user needs), you have components and interfaces and even flows within a map. You can even map activities, practice, data and types of knowledge (i.e. a whole range of different forms on capital) on a single map. 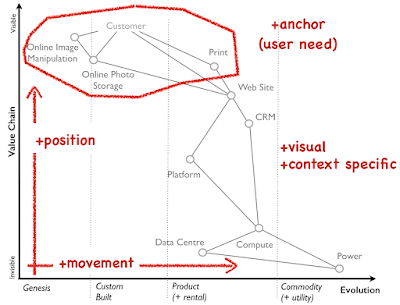 You can use such a map to co-ordinate, to align, to organise, from operations to capability and even determine and communicate strategy in much the same way you can use any map to do this. You can also use Wardley maps to learn context specific gameplay, doctrine and the rules of the game.

So, here's the rub. The overwhelming majority of companies have no maps of their business or competitive environment. They have lots of things they call maps (i.e. box and wire diagrams) but whilst they might be visual and somewhat context specific (if you're lucky), they invariably do not have position and movement. On the rare occasion they have some form of position, they generally don't have a consistent anchor.

As a result if you walk into a businesses you can normally discover symptoms of this such as concerns over lack of alignment, communication problems, difficulty in determining strategy (which as a consequence deteriorates to simple meme copying, gut feel and highest paid person's opinion) and almost without exception there is no mechanism of learning.

In the worst examples when these companies are under pressure, the symptoms turn into desperate wishful thinking and almost praying to memes to save them i.e. "if we [fix the culture / fix the structure / build an ecosystem /  go agile / go digital etc etc] then we'll be alright"

Fortunately for them, many of these companies survive because this situation often occurs across entire industries. It's ok to suck as long as your competitors do. As a result a small company like Adallom can use a bit of actual situational awareness to just walk into the security industry and help itself to a $300M+ exit or a company like Canonical (i.e. Ubuntu) can just help itself to the cloud industry without barely a shot fired by past giants. You should have no fear of large companies in most industries though there are the obvious ones to avoid (e.g. Amazon).

"But I have a map" I often here people cry and then show me a strategy map or a business process map or a trend map or a value stream map or a 2x2 such as a SWOT. No, you have a nice diagram which has very niche uses and can be extremely useful in those niches.  However without position and movement then whilst it's better than nothing it's certainly not what I'd be using for strategic play, co-ordination, communication, learning and organisation.

Examples of things which are often called maps but are not what I would consider optimal for strategic play and learning (including reasons) :- 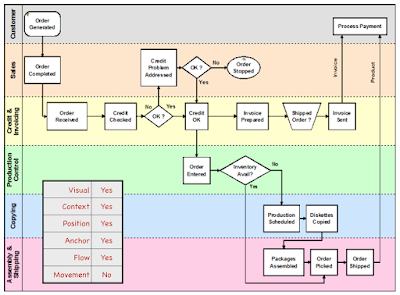 I happen to like business process maps. Often the anchors can be very wobbly but because they lack movement they aren't very useful for strategy, organisation or communicating direction. However, very good for understanding the "as is" and extremely helpful in building maps. 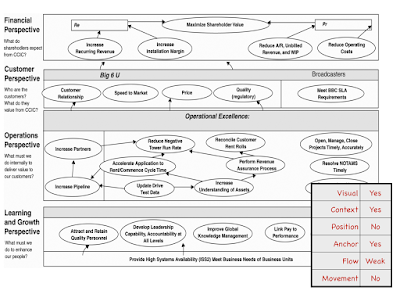 Very useful for thinking about elements involved but without movement then not very helpful in terms of strategy and learning. Quite good at exposing what the company "thinks" is important and sometimes useful in exposing user needs. 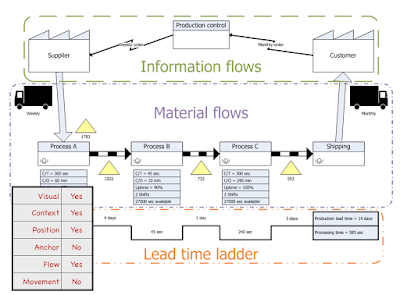 Excellent for flow and one of my favourite (NB, you can determine flow in Wardley maps). Still, I like value stream maps but you have to be really careful not to go around making the ineffective more efficient. Also not much use for strategy or learning context specific play because there is no movement. However, good at what they do i.e. improving flow. 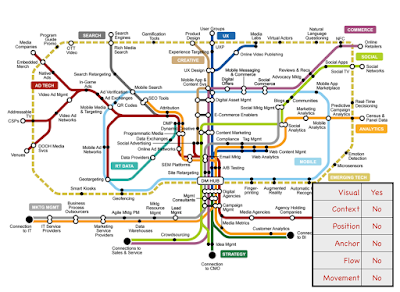 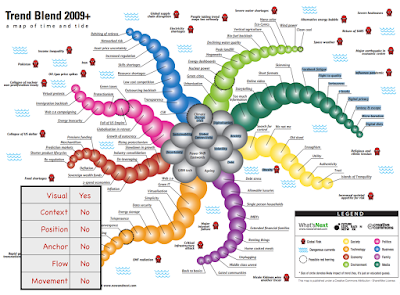 Lots of different variations on these. Perfectly fine for discussing opinions on future trends but from a strategy, operational, organisation and communication point of view then next to useless. Usually a random categorisation of things without context, position or movement. Can be helpful in getting people to agree on a taxonomy and usually provides a useful list of things to think about

I'm afraid, despite the pretence ... most businesses aren't playing anything like a game of chess and most are acting like generals who think that understanding the environment is not important and that the key to success is to copy what 67% of other generals are doing.  Look! They're bombing hills. Go find a hill so we can bomb it! They've got a Chief Bombing Hill Officer, quick, lets employ a CBHO!

Just go find someone from the military and ask "Do you think situational awareness is important and are maps useful?"

Wardley Maps sound so perfect! (added in response to comment),

As I've said numerous times before, my maps are Babylonian Clay tablets. They are imperfect, primitive and will be replaced by something better by someone else. This was the point of making the mapping technique creative commons share alike - to show an unencumbered path free from constraints and demands by authors, consultants etc.  I do have a bias towards them because I've been using them for over a decade and so yes, much of what is embodied in a map has become intuitive to me.

The maps are fundamentally a communication tool, the only people who can map are yourselves (don't hire consultants) and I'm afraid, it's one of those things you're just going to have to dive in and learn. The only book that I'm aware of that is dedicated to mapping is this one which is provided by the Wardleymaps.org group. It is based upon various of my posts and hence also creative commons.

The subject matter is complex. There's a lot to learn, in the same way that chess isn't intuitive to a beginner. You can't just sit down and play chess. It takes practice just to get to grips with the game. If you want to embark on this journey, a set of useful posts can be found here.

But let me be clear, there's an awful lot of people out there claiming they have maps for business. Whether it's strategy maps or customer journey maps or value stream maps, most of them don't even come close to having basic concepts of position and movement.  From the point of view of learning, they are practically useless.  Most of these "bad" maps are nonsensical and no matter how you dress it up they remain so.  Many of them even expect you to pay for these maps or hire their consultants.

Sod that. Start with user needs, understand your value chain and then understand how evolved the components are. It costs you nothing but a bit of time and if you can find a better way - make it creative commons.