The robots are coming ... for whom the bell tolls.

I often read articles about how machine intelligence and robotics will replace basic roles in society, they will become the new drivers, the new waiters, the new hospital porters and nurses of this world. But is this likely? And if they are going to replace jobs then whose job are they most suited to?

With questions like this I tend to look through three lenses - ability, cost and acceptability. Does it have the ability to do a better job at a reasonable cost and would we accept it? For example, let us take the idea of a waiter. Certainly there's some mileage in terms of a marketing gimmick to begin with but humans are surprisingly good at taking orders, delivering food and cleaning up tables. Humans are also relatively cheap compared to the current cost of machine intelligence and robotics to replace them and in general though we might be able to trust a robot to deliver our food, would the banter be the same and would it be as socially acceptable to customers? Beyond the gimmick, I doubt this change will happen for quite a long time.

However, there are other groups where ability, cost and acceptability are far more positive for replacement. One possible candidate is that of the CEO. The CEO? Of a company? Surely not? Well, I think so. Lets go through the reasons.

From my experience, most CEOs tend to demonstrate poor situational awareness, an inability to decipher doctrine from context specific play and the boardrooms are more akin to alchemy, gut feel and whatever is popular in the HBR than to chess playing masters. Various studies have questioned the impacts of CEOs e.g. Markus Fitza's study demonstrated that the CEO effect on firm performance varies little from chance.

From my own work, I noticed a connection between situational awareness, action and performance back in 2012. This was from Silicon Valley companies which are supposed to be top of the game. When I broadened examination outside of the Valley, I found situational awareness tended to decline. 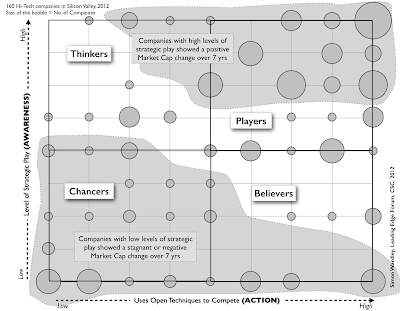 So rather than being a Darwinian competition of survival of the fittest where all conquering CEOs battle each other in a game of wits, there's another less charitable way of looking at this - survival of the least incompetent. It's governed by the same rules but rather than a positive chess like game of survival, it's more random with the occasional hero characters. A bit like the brawl of new players in fantasy role playing.

When I started modelling competition between actors, I found a disturbing similarity between competition between blind actors using chance and what is happening to company age of leading companies (results of various tests compared to real life shown below). I tend to therefore side with the view of Markus Fitza. 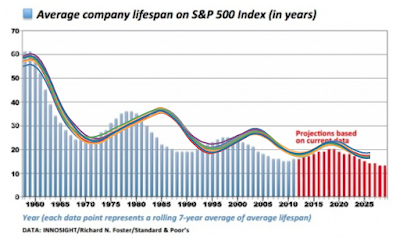 Given that situational awareness can be improved, that doctrine and context specific play can be learned and we've seen first hand the experience of companies failing to understand basic lessons and being disrupted by highly predictable change (e.g. cloud) then we have to ask whether this is just inertia, blindness or caused by some other motivation?  CEOs are not daft people but then neither are fund managers and the vast majority were outperformed by simple trackers of financial indices. From my experience, this is an area where machine intelligence might vastly improve on the performance of the incumbent workers.

The other upside of replacing the CEO with machine intelligence is cost. Unlike your average waiter, CEOs aren't cheap - they tend to be very expensive. Now, whilst Marissa Mayer's performance at CEO of Yahoo has not been bad (despite what many think, the company has maintained its revenue and grown its share price), the question becomes whether this has been worth the speculated $365 million for 5 years of work.  It doesn't actually matter how much the final figure is, we simply know it'll be a lot. In general, there's a lot more money on the table replacing the CEO than there is your average worker.

But CEOs lead us! You wouldn't trust a robot! Well, that tends to be the idea in the hallowed walls of management thinking. But we're already becoming directly used to machines taking life and death decisions for us in areas such as driving cars. Most people tend to be motivated by autonomy, the ability to gain mastery, purpose (as in direction) and financial rewards. Using cell based structures, maps and other tools (e.g. pioneer, settler and town planners) then it should be possible for most to create such an environment. A machine can as easily as a human manager direct a cell of pioneers to go do what they are good at by exploring an uncertain area to see what is found. Equally, at the other extreme a machine is just as capable of telling a cell of town planners to look at industrialising something and it is even more likely to take rational decisions without inertia and sentimental motivation or past political capital. Also, a machine is perfectly capable of learning the basic economic patterns that apply to an environment. The failures of companies such as IBM, HP and others in cloud are executive failures, human error against highly predictable changes.

At Canonical (Ubuntu) we simply exploited the predictable in order to take us from a small fraction of the market to 70% of all cloud computing in around 18 months, and Ubuntu has maintained that position since. Had we been up against machines rather than human executives then I'm not sure we could have got away with it and we certainly couldn't have used inertia against others. I somehow doubt people will have a problem with machine intelligence as the CEO if it leads to more stability, more security and the ability to enhance autonomy and mastery. Given these conditions I suspect many would happily cheer for our robot overlords - "hey, are you're still running with that old Cyberdyne systems CEO? We've just installed the new HAL 9000, it comes with better stock performance and added EQ with moral imperative subroutines. Everyone is really happy."

Except of course, there's one group that wouldn't cheer - those desiring to be CEO or those who are CEO. This would be like turkeys voting for Christmas. If such a change was to happen then it would have to be through testing first in startups and then activist investors.

However, given all the roles that could be replaced then on a basis of ability, cost and acceptability then the average CEO seems as good if not a far better bet than your average waiter. There are always exceptions to rules but it's certainly worth thinking about.

Since this kicked off a particular discussion, it's time to come clean.

I chose the CEO as the 'sacred cow' of management thinking. However, on a ability, cost and acceptability basis then there are many attractive targets from lawyers, to finance, to hospital executives. There are many areas of white collar work that appear more financially attractive to replacement by machine intelligence and in many cases, I do mean replacement and not additive because the bar is so low, the costs are high and it would be acceptable.

We've already got companies working on industrialising contract writing with AI, we already have robo finance / investment advisors and I don't see that robo managers are that big a hurdle to jump. There's just more margin, more profit to be made in this space and the idea of robo nurses to waiters - complex tasks which humans are good at and can do cheaply - just doesn't seem to make that much financial sense at this time.

In my view it's not the blue collar workers that need to be immediately worried about robots / machine intelligence but instead the white collar workers who think they're not the target. Of course, this does open up questions about what the world will look like if it's all managed by robots but we'll leave that to another post.
Posted by swardley at 9:21 am