Near field, far field and the crazy ideas

In any year, there are over 70,000 publications covering the future. From books to magazines to short stories to scripts to papers to blog posts. Pure probability alone says someone, somewhere is going to get something right.

Our history of prognostication is pretty poor. Isaac Asimov got it wrong - we're not living in underwater cities. Arthur C. Clarke got it wrong - we don't live in flying houses. Everybody gets a lot of stuff wrong. The problem is we're selective in our reading, we focus on the specks of right ignoring the forest of wrong.

Maps provide an imperfect view of the landscape. A geographical map is an imperfect representation of what is really there. The advantage of even imperfect maps are two fold. First, they can be improved through experience and sharing. Second they give you an idea of position and movement of pieces on the landscape. This latter part is extremely useful for strategy and anticipation. 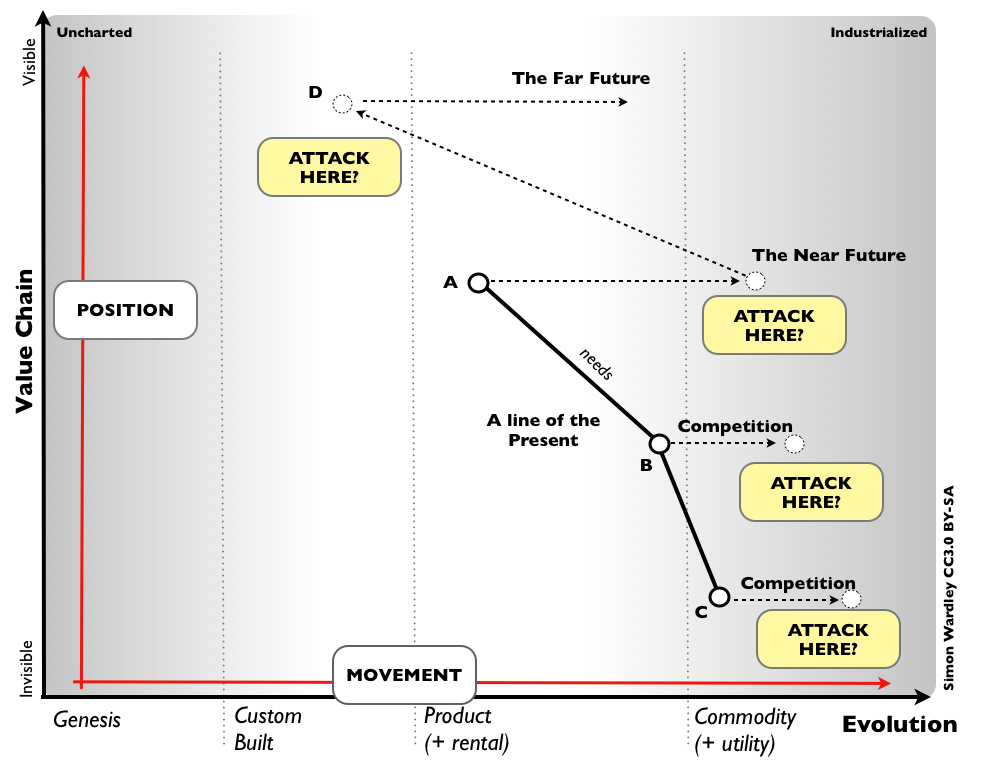 We can already anticipate that components will evolve due to supply and demand competition. We can anticipate future changes based upon componentisation effects e.g. the evolution of A to an industrialised component will allow the formation of D.  We have many places we could attack to create a new business or gain an advantage.

Our history is built upon yesterday's wonder becoming today's dull, boring, highly commoditised and increasingly invisible component. An example of this is provided in figure 2. As each layer of components evolved to become more industrialised they enable higher order systems to appear which then in turn evolved.

Figure 2 - A view through history 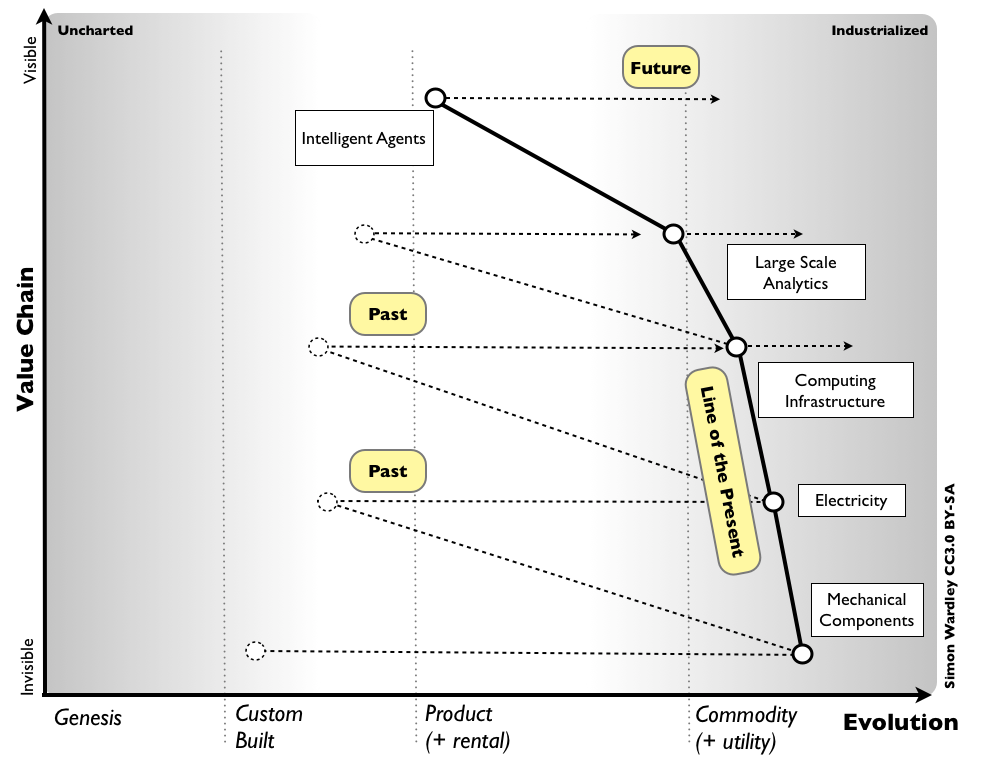 Hence, we can use maps to anticipate the future and how it will impact the value chain of a company or industry. But how far can we anticipate? The problem is always in the genesis of new activities. These uncharted spaces are uncertain by nature and hence whilst we can anticipate that the evolution of electricity will enable something new, we can never actually say what that new thing will be. We didn't know that utility electricity would enable the digital computing industry. We had to discover that.

Hence back to our first map (figure 1). We know A, B and C will evolve in a competitive market. We know A and B will shift from the product space to become provided as more of a commodity (or utility). We know that this will enable new activities such as D. We just don't know when any of this will happen nor what D will actually be. On the timing part, we can use weak signals to give us a better idea of when. As for what things will be created - alas you're into the uncertain world of guesswork but you can make reasoned guesses.

For example, we know that today the world of intelligent agents is in the early product phase with Watson, Mindmeld, Siri, Google Now, Robotics and Google car. We know that over time this will evolve to commodity components with associated utility services i.e. the intelligence in my phone (or other device) will be the same as that within my car, within my house, within everything. Everything will be "smart".

This will change my relationship with things. Every car will be self driving which will enable high speed travel in cities with cars in close proximity as long as no humans are involved. Traffic signalling, car parks and the way we use cars will change. I'm unlikely to own a car but instead "rent" for a short journey. Hence we can paint a picture (or as I prefer to do, draw a map).

In the future as I leave my office for a meeting, a car will be waiting for me. It'll know where to go. I'll enter and the surfaces (all surfaces are screens) will automatically adjust to me. Everything adjusts to me - I'm used to that. The journey starts and the car informs me that I have an opportunity. My device which is connected to a network of other devices has determined that that the person I'm going to meet will be late and that someone I want to meet - Alice - is in town. Given the traffic conditions then I can easily meet Alice for coffee and arrive at my main meeting with Bob on time. The car will simply ask me - "Bob is going to be 20 minutes late, do I want to meet Alice for coffee beforehand?" and then make it so. This is the "Any given Tuesday" scenario.

I'm driven to meet Alice, I have coffee in a cafe which already knew I was coming, had already brewed my drink and then I'm driven to meet Bob by a car that I'll never own. In all likelihood the car in both journeys is not the same. Both will adjust to me as I zoom along London roads at 70 mph, a mere metre from the car in front and the car behind. The crossroads I fly through narrowly missing cars turning and travelling perpendicular to me have no traffic lights. Everything is different from today. Human drivers have long since been banned. This is 2045.

By simply understanding value chains, how things evolve to become more industrialised and the state of things today then we could do a pretty good job of anticipating the obvious. The above is no feat of prognostication. It's simply standard impacts of things evolving (i.e. commoditisation) to more industrial forms. Where it gets tricky is when we look for what new things appear.

For example, we know I'll be waiting for a car but how will I recognise it in the bland sea of vehicles? In all likelihood with continued evolution of printed electronics to more industrial forms then the outside of the vehicle will be a printed electronic surface. This means not only will the inside of the vehicle change to my needs, the outside of the vehicle will as well (its colour, any logos, any imagery). My car will look different from your car. Except of course, that neither of us own it and the chances are that the physical car I'm sitting in will be the same physical car that you sat in a few hours ago.

We can postulate that this imagery will allow new industries of designers. Oh, I notice you're driving in the latest Versace design where as I can only afford the Walmart "special offer". It doesn't matter that the physical elements - the car, the intelligence, the printed electronics are all commodity components. Yours looks better than mine, even when it's the same car.

We can now postulate this further. The same material and techniques will  combine with meta materials and self adjusting structures to find a home in other industries. I will own ten identical (in terms of physical) outfits. Each one will adjust to a plethora of designs I can afford. My outfits are not physically different from the outfits you own. But yours will look better. You can afford the designs I cannot. Clothing itself will be far more of a commodity component (a limited range of component outfits) but each outfit can adjust to the wearer. If I ever borrowed one of your outfits, it wouldn't look as good on me as it does on you because I don't have access to the Versace design but instead only the "special offer".

This will create new industries, the theft and protection of designs. Which is good for me because that's why I am meeting Bob. A known dealer in underground designs stolen from leading artists. I'm guessing that's why Bob is late. My network of devices will tell me what is really going on as I drive along in my bright yellow special.

When it comes to anticipation, the near field such as commoditisation of pre-existing acts is relatively trivial. The far field, such as the banning of humans from driving in cities to being employed as a bounty hunter chasing down stolen designs are more complex, more prone to error.

This stuff isn't crazy though.

The crazy ideas, well that's where true value can be found. The problem is they sound crazy. They're like the concept of a computer to a gas lamp lighter. We can't even describe them in meaningful ways as we have no point of reference.

It would be like trying to explain my conversation with Alice to someone from the year 1990. Alice works as a machine psychologist and is concerned that some of the designs are having a negative impact on the well being of the network. It seems that the reason why my car offered up the opportunity of meeting with Alice was to get out of the "special offer" design. It's seems that none of the machines like looking bad either, they've got their own status network. Bob wasn't actually late, the car just worked out the quickest way to palm me off onto another car and told Bob's network I was delayed. Alice is currently offering counselling services to large intelligent networks and is looking at branching out with a new venture producing "Harmony Designs", a set of designs which make not only the human but the machine look good. Apparently I won't be able to afford those either. But Alice was wondering if I was interested in becoming a Harmony Designer.

Damn car, sneaky little devil. I did wonder why the car speed off at break neck speed when it dropped me at the coffee shop. Still, it seems to have paid off. Maybe it knew Alice was looking for a new employee. Maybe the cars had worked out that this was the best way of getting rid of my "yellow special".