Many many years ago back in the days I worked at Canonical (2008-2010), I calculated a forward run rate for AWS. This was based upon a few existing analyst guesses of revenue, a period of exponential change (a punctuated equilibrium), some expectation of price elasticity and a lot of voodoo & jiggery-pokery.

I said that eventually Amazon would have to report the AWS earnings (e.g. due to 10% reporting rules SFAS 131) though I expected this to be 2016. I would occasionally add on analyst predictions each year to confirm / deny the change but the problem was - no-one really had a clue. It was all speculation.

So looking at the model where did I have 1Q2015 pegged at? I had it pegged at a forward run rate of $2.38 billion per quarter but that figure is fairly meaningless as it's based upon an annual estimate. So what about the end of 2015? Well, here I was expecting Amazon to have annual forward run rate of $16 billion p.a. and hence for each subsequent year to make more than $16 billion p.a. in revenue. For the end of 2014, I had the forward run rate at $8 billion which means every year after I would expect AWS to exceed $8Bn in revenue (e.g. 2015 should be above $8 billion).

If you think this sounds an odd way of doing things - that's because it is a bit odd. The model is based upon a future test of a hypothesis that something is greater than a certain value rather than based upon trying to calculate what a value is at some specific point in time. There is a reason for this but it's rather obscure and not what is of interest. 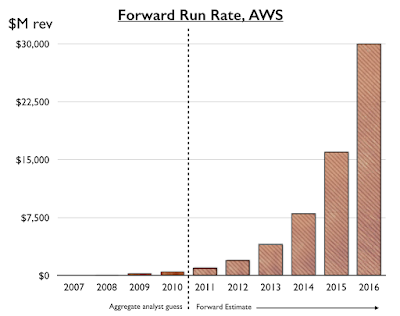 My interest is not so much in tomorrow's reporting (and I suspect there will be be gasps in some quarters) but in the subsequent quarters and the rate of change. My interest is in just how fast the punctuated equilibrium is moving.

I do get asked what do I think the revenue reported will be? I haven't got a clue.

If I took the forward run rates of the model for that quarter and the previous, by simply taking an average it would have revenue at around $2.2 billion. But this ignores any variation due to price changes, any seasonality impacts (I really only concern myself with the magnitude of the annual figures), the annualised nature of the forecast, that it concerns forward run rates and given this model was written many years ago - it's based upon a lot of assumptions, actual revenues depend upon competitors action - then even if it's close that was just more luck than judgement.

I'll be happy if we're talking about AWS revenue using $Bn's because that at least demonstrates the change was not linear and the punctuated equilibrium is in full effect. Still, the waiting should be over. We should find out soon enough but I'll need a few more quarters of data to get a really clear picture.
Posted by swardley at 2:41 pm