In interviews and surveys with over 160 different companies back in 2012, we found similarities and differences  between companies and their approach to open technology particularly when those companies were categorized into groups of Traditional Vs Web 2.0.  For example, both groups had formal processes for opening technology and were unwilling to open a source of competitive advantage. Figure 43 provides the percentage of companies within a particularly group (Traditional or Web 2.0) responding to a particular question (from strongly disagree to strongly agree)

Figure 43 - Unwillingness to Open a source of competitive advantage. 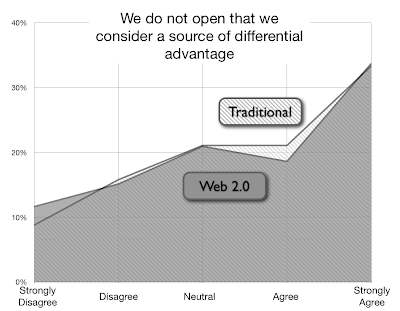 However, when it comes to providing open technology in order to compete  with others, there is a marked difference between the two populations. (see figure 44)

Figure 44 - Use of Open as a means to compete 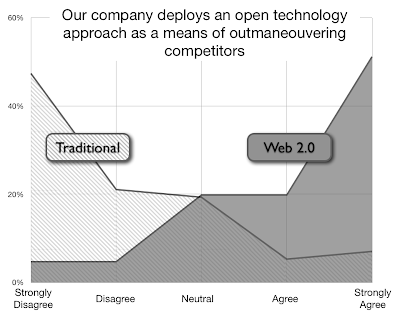 After further investigation, it turned out the difference was strategy or more specifically the ability of the company to consider its own and competitor’s value chains in formulating strategy. A large group of the Web 2.0 had some means of modeling the environment, even if this was just a mental model rather than a map. They would consider the impact of open on this model. They appeared to exhibit a higher level of strategic play. This same group also exhibited characteristics of Next Generation companies (i.e. the set of characteristics which we determined in 2011 as indicating the next evolution of organisations).

Hence, the LEF examined the level of strategic play (i.e. consideration of own and competitor’s value chains in determining strategy) against the willingness to use open as a means of competing.  The results are provided in figure 45 which a form of heat map where the size of the bubbles represents the number of companies involved, categorized by whether they were more Traditional or more Web 2.0.

Level of Strategic Play is an index derived from a set of questions covering understanding and consideration of own and competitor's value chains in determining strategy.

Uses Open to Compete is an index derived from a set of questions covering the willingness of a company to use open as a means of competition (whether open source, API, data or other) both in terms  of statement of intent and actual action.

Figure 45 - Level of Strategic Play vs Willingness to Use Open 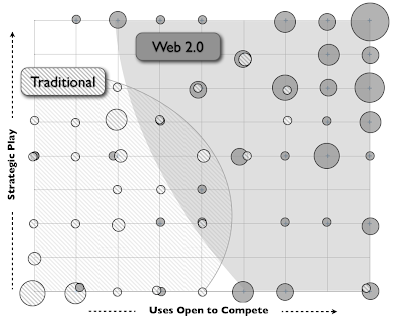 You can consider one axis the level of strategic thought, the other axis a willingness to execute and act on this with an appropriate tool. On examining sizes of companies and changes in market cap over the last seven years we then categorized four different sections of the graph (see figure 46) with each section containing a general type of company – Players, Thinkers, Believers and Chancers. 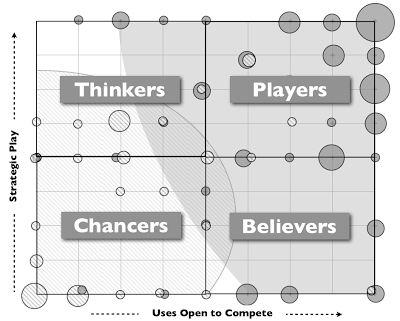 A description of the characteristics of each type is as follows: -

• Players: These organizations use open technology where appropriate as a means to compete and think clearly about its impact on their value chains and those of competitors – in other words they think strategically and act. This group shows a high affinity for the more advanced strategic plays (undermining competitors barriers to entry, removing points of differentiation, protecting existing value chains and recruitment) and is dominated by organizations identifying themselves as ‘Web 2.0’. They tend to be large firms and market leaders in their respective segments with strong market cap growth over the last seven years. They are neither “open” nor “proprietary” companies but a blend of both and they tend to exhibit many of the characteristics of the Next Generation of companies.

• Thinkers: While these organizations tend not to use open technology as a means to compete, they do consider the impact on their value chains and those of competitors. This group appears to understand the game but chooses not to engage seriously now – in other words, they think strategically but don’t act. It includes Web 2.0 and Traditional medium- and large-sized firms. They show moderate changes in market cap over the last seven years and tend to exhibit a few of the characteristics of the Next Generation of companies. Many of these companies tend to be “proprietary” in nature rather than mixed.

• Believers: This group uses open technology as a means of competing but does not show any affinity for strategic play – in other words they act but don’t tend to think strategically. Their attitude tends to be one of ‘open by default’ and they are just as likely to reduce a barrier to entry into their own business as to create an advantage over others. This group is more “open” in nature and is far more willing than the general population to open up sources of differential advantage. They tend to be smaller firms, often start-ups with mixed fortunes. They tend to exhibit some of the characteristics of the Next Generation of companies.

• Chancers: This group neither uses open technology as a means of competing nor shows any affinity for strategic play – in other words they neither think strategically nor do they act. Whilst they often know their competitors are using these strategies against them, they do little in these areas other than basic consumption. Traditional companies and market laggards mainly populate this group, with poor and negative market cap growth. They exhibit almost none of the characteristics of the Next Generation and tend to be “proprietary” in nature.

In terms of market cap change, what the results showed clearly was the importance of strategic play (thinking) over use of open as a competitive tool (acting) i.e. it’s better to be a Player or a Thinker than a Believer or a Chancer. The strongest performing group were the Players who do both and these companies also exhibited the most Next Generation characteristics. The weakest performing group were the Chancers who also exhibited the most Traditional characteristics.

The are two things to emphasize.  First, having an understanding of the landscape, how it is changing, where your opponents are and good situational awareness (i.e. high levels of strategic play) tends to be far more important for a company’s health than simply acting (as in competing with open). Yes, 'open' can be a powerful weapon in the hands of an experienced strategist but that strategist needs to know the landscape before they fire. This is why Maps are so important.

The second thing to note is that not only are organisations evolving (from Traditional to Next Generation) but those  more evolved companies also appear to be playing the more strategic game. That's sort of a double whammy. They have more evolved structures and more strategic executives than their competitors.