When Linus Torvalds launched the Linux project in 1991, few people could have imagined that free software developed by open communities would ever match, let alone surpass, the efforts of industry giants such as IBM and Microsoft. Yet in a wide range of areas this has been precisely the case.

The full market value of this open technology is however impossible to calculate because it is not formally accounted for. How can we measure the value of Wikipedia’s commons of open content?  In one study by O’Reilly Media, the global value of open source to just the computer hosting market was estimated at over $100 billion, and this  is only a part of the overall open technology industry. According to the Black Duck Research, there are over 600,000 open software projects using over 100 billion lines of code and drawing on 10 million person-years of effort.

Studies have also shown that roughly  90% of large organizations already use open source (and the rest probably don’t realize that they do) and 75 percent of the world’s top 10,000 websites are built on open-source technology. Whichever way you look, open technologies are having a powerful impact.

Along with these extraordinary achievements, it has also long been speculated that the ‘open’ meme would eventually spread to non-IT sectors. There are three main reasons why this was likely. First, software has become increasingly important in virtually every industry, and thus it seems logical that the dynamics of the software industry would spread to other sectors. Second, as the Internet is now the backbone of most modern businesses, much more open forms of community innovation are now possible in just about every industry. Third, cost and innovation pressures are now so great in so many sectors that new approaches must increasingly be considered.

While these forces have existed for some time, it appears that open approaches are now starting to become widespread across the broader economy. In addition to many open source software projects, we have recently seen a growing emphasis in universities on open science and open curricula; increasing government commitments to open data; and perhaps most intriguingly, impressive demonstrations of the power of open- manufacturing designs when combined with 3D printing. There is now ‘open’ activity at virtually every level of business and IT.

However, for many, the word ‘open’ as in ‘open source’ still conjures up concepts of hippy idealism where people give away their work to others for nothing in a spirit of generosity and passion. In today’s world, this view is increasingly naive. An open approach is a powerful weapon in the hands of experienced strategists. It can be used to remove barriers to entry into an opponent’s business, encourage standardization around your own practice, develop an ecosystem to strengthen your position, as part of a land grab for new sources of value, and even as a source of new talent.

I use the term open technology above because these ‘open’ approaches are not limited to open-source software but also open data, open hardware, APIs, open science and open processes.

But how did something that began two decades ago with a simple bulletin board message inviting people to collaborate on operating system project have such a powerful and transformative impact?

It is essential to understand that when Linus Torvalds posted that message he asked others to contribute and comment. By doing so, Torvalds created a community of contributors and launched a new ‘open’ method of community development.

The key is not only the openness of what is created (in terms of licensing of the code or data) but also the collaborative approaches to working. These two aspects when combined drive the evolution of any activity, practice or data. The openness drives ubiquity by removing barriers to adoption, the collaborative working drives feature completeness, understanding and hence certainty (see figure 40). 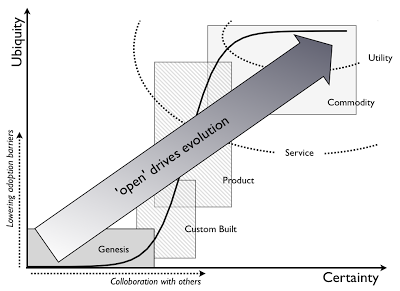 The consequences of evolution should by now be familiar to the reader. As anything evolves it becomes more efficient and can enable rapid development of higher order systems through componentization effects. Hence the effects of making something open are four fold – rapid adoption, improved feature completeness, higher efficiency and rapid genesis of higher order systems.

Whilst these are entirely separate effects, they are often lumped together under the single term innovation, such as product innovation (feature completeness), marketing innovation (adoption) and the genuine creation of something novel and new (i.e. genesis). It’s worth keeping these separate and I’ll explain why in the next section.