Once you have built maps for an organization and used this to decide a strategy, the next question is how do we go about doing this? How do we organize ourselves?

Many of the issues that businesses suffer with, from business alignment to various forms of inertia to one size fits all to the perils of outsourcing are a consequence of how we organize ourselves. Most the time we break companies down into silos grouped around type – i.e. type of activity, practice or data. Hence we have Finance departments, IT departments and Marketing departments.

Each of these silos consist of many activities all of at different stages of evolution. It is easy for a single department to adopt a one size fits all technique that invariably creates alignment issues with other groups. “We need IT to be more efficient” will be the chant of one group whilst another declares, “We need IT to be more innovative”. The more silos of this type, the more likely that alignment issues will occur.

A more effective approach (used by the Next Generation companies) is to break the organization into cells connected by services. As show in figure 54, the cell-based approach based around grouping components in small teams resolves the problems of one-size fits all and many alignment issues.

An example of this can be found with Amazon’s two-pizza model of working in which no team is bigger than can be fed by two pizzas (12 people). Such cell-based approaches are diffusing but are still infrequent in occurrence. 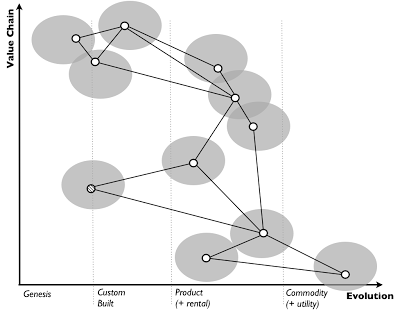 Now, a two-pizza approach takes advantage of componentization with each group not only providing components to others but also relying on components provided by others. Because each group has unknown demands for what it produces and because the inputs may fail, each group is required to build using distributed approaches and to anticipate failure. Concepts such as degeneracy, where once component can be switched for another become important and reinforcing mechanism including the constant introduction of random failure are often used e.g. a master of disaster or in Netflix’s case a chaos monkey.

Is a cell-based approached therefore the limit of organizational design? No.

The components continue to evolve and as they do so their characteristics change. Which leads to a question. Even if an organization is broken down into small cells, are the right people involved?

In other words, do the people you need to deal with a component, such as an activity in the genesis stage the same as the people you need at the more commodity stage? Are there people who are more comfortable with a highly chaotic and uncertain environment with high rates of failure and flashes of brilliance? Are there others who are more skilled in a world that is more ordered, highly metric, highly reliable and efficient?

One way to resolve this potential dichotomy is to not attempt to do both but to simply focus on one side. For example, to focus on provision of highly efficient utility services and enable others outside the group (an ecosystem) to innovate and then exploit that innovation as it diffuses - the ILC model.

The term ecosystem refers to the collection of people, activities, practices and data which creates our environment and for which we have influence over. Each company is its own ecosystem. The provision of utility services and use of models like ILC is simply about widening our ecosystem to include others.

Within this wider ecosystem we often have a separation of concerns between the company focused on efficient provision of core services, outside companies innovating (taking the uncertain gamble in pursuit of novel and new) and the ecosystem being leveraged to identify successful diffusion. Can this three-part structure be replicated within an organization?

This is the purpose of a structural model known as Pioneers, Settlers and Town Planners where and organization is broken into these three distinct phases. To explain the model, we first need to examine another concept known as Profile & Flow.

Take your maps and count the frequency of activities, practices and data at each stage of evolution (e.g. number at a specific stage / total number at all stages). This is what creates the profile chart in figure 55.

Figure 55 – Profile of an Organization 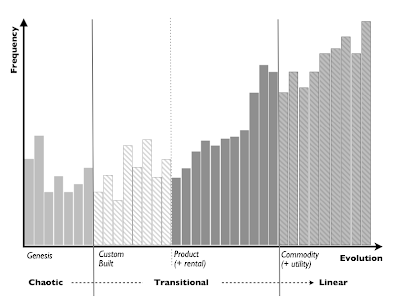 All components are evolving (due to consumer and provider competition) from genesis to commodity. At the same time there exists genesis of the novel and new including higher order systems through componentization effects. Finally the more evolved components tend to become provided by external suppliers. The overall effect is we have a constant flow from left to right and the graph is not static.

The exact profile and rate of flow will vary by company and its value chains along with industry. Hence some industries will tend towards a more commodity focus with efficiency in provision being critical whilst others we tend towards genesis and the creation of novel and new. Within any industry there will also be companies that choose to play a certain role, so in the pharmaceutical industry you may have companies focused on generics and others focused towards novel drugs.

Getting the balance right is important for long-term stability. The more commodity components are highly predictable and when you’re a provider of these create a base line of revenue. Genesis is by nature highly uncertain and risky but also provides the highest rewards. This is also why ecosystems are powerful tools because by focusing on the base line revenue and enabling others to do the gambling for you and then leveraging the ecosystem to exploit any success (commonly called “eating the ecosystem”), you can reduce some of the uncertainty whilst gaining a higher revenue than simply focusing on commodity.

When it comes to internal organization, rather than breaking the profile into type (such as IT, Finance, Marketing) and creating many smaller profiles leading to all the issues of one-size fits all and alignment, we will instead structure by profile.

To structure around profile and the flow of evolution in an organization, we will use a structure known as Pioneers, Settlers and Town Planners. (see Figure 56) 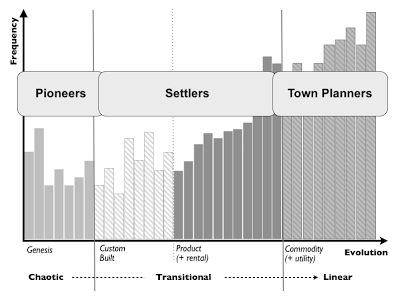 The Pioneers will deal with the chaotic and uncertain world of genesis (or the “innovation” of novel and new). They are our artisans, our “creative” minds. They use appropriate techniques such as agile, rapid development, minimal viable system with a focus on experimentation and trying things out. The group understands implicitly that the future value of something is inversely proportional to the certainty we have over it, gambling is a must. As there is no defined market, there are no customers to listen to only gut. Failure is accepted as a norm, rewards are built on future successes and rapid change is the “standard operating procedure”. In order to achieve the speeds necessary, use of component sub systems becomes essential.

The Settlers cover the custom built to product stage and focus on leveraging what exists. This group steals from the Pioneers whether internal or external (in the wider ecosystem). The act of stealing (or eating the ecosystem) forces those Pioneers to get on with the act of Pioneering. The Settlers in the mean time concentrate on productisation or provision as rental services. The Settler’s focus is on listening to customers and meeting their needs, developing metrics and feedback, incremental improvement, driving a component to feature completeness, maximizing profitability and reducing cost of production. They grow ecosystems, they nurture them and they exploit them. This group is where most of the games of strategy are played e.g. do we open source a component to undermine a competitor or do we slow down evolution through a dark art (branding etc)?

Settlers tend to use a blend of methods, part science / part art, they are more “cunning” than “creative” and are rewarded on profitability. They tend to be very good at spotting patterns (a necessary requirement for productisation of the novel and new). Similar games are played whether the component is something produced for sale or consumed by the organization. When consumed the focus is on driving down cost, driving it to more of a commodity etc.

The Town Planners cover the commodity and utility stages and focus on commoditization and building of “platforms for innovation”. This group steals from the Settlers and builds the common components that the Pioneers use. The act of stealing is essential due to inertia that Settlers will build up through past success. Hence stealing forces them to move onwards. The Town Planners are almost exclusively metric driven - it’s all about volume, efficiency, resilience, cost and performance and woe betide anyone who turns up without data. Methods are about minimizing deviation, repeatability and continuous operational improvement. Six Sigma and Kaizen rule the roost.

Don’t confuse this with a lack of “creativity”, the people you need are exceptional and able to turn your humble product into a towering beast of efficiency. When it comes to listening to customers, this group is focused on providing volume operations of exceptionally efficient good enough standard components. They know what is needed better than the customer does. They also know how the customer suffers from inertia and becomes deluded over the need for customization. They know how if left to customers then everyone would want their very own highly customized nuclear power plant for their individual needs, there would be no standards and the world would progress at a much slower pace. In my experience, they can be quite a cynical crowd.

Rewards for Town Planners should be based on operational performance, cost efficiency and reliability. As a business you want to accept this is going to be a low margin but stable area.

The balance between Pioneers, Settlers and Town Planners (PST) should vary with profile and flow. The rewards mechanism, techniques and means of operating for each group are different. Even the culture can be different.

The PST structure should be used in a cell-based structure (see Figure 57) as it requires activities, practices and data to be broken down into the different evolutionary states. 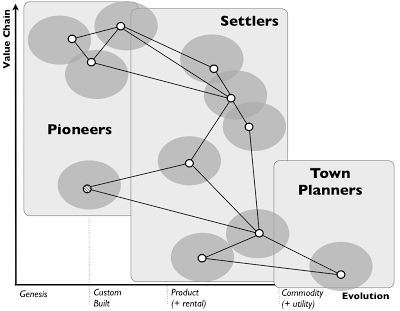 By now the reader should have an understanding of mapping, how the environment can be manipulated, the process and impacts of change and how organisations can be structured around this. In the next few sections I intend to cover the future and the questions of validity of the work.

However, for the time being I'm going to need to focus on some other work, so I'll have to leave this for some later date.  Hopefully, you've already found the series useful.

Previous post in series ... Attack, Defend and the Dark Arts