In 2005, I had the basics of evolution and mapping. By 2007, I had enough supporting data to call it a weak hypothesis (correlation, causation and thousands of data points). What I lacked beyond the use of the mapping technique in predicting market and competitor changes were more general predictions.

However, the cycle of change was pretty clear on the co-evolution of practice and how new organizations formed. The industry was already going through one change caused by the commoditization of the means of mass communication (e.g. The Internet) that had all the normal patterns plus a new form of organization, the Web 2.0.

What I wanted to know is could we catch the next wave. Would the shift of numerous IT based activities to more utility services create a new organizational form? Could I catch this?

Timing was critical and unlike my earlier work in genetics where populations of new bacteria are grown rapidly, I had to wait. So wait, I did.

By 2010, the signals were suggesting that this was happening, so at the LEF (Leading Edge Forum) we undertook a project in 2011 (published in the same year) to examine this. Using population genetics techniques, we were looking for whether a statistically different population of companies had emerged and their characteristics (phenotypes) were starting to diffuse. It was a hit or miss project, we’d either find the budding population or it was back to the drawing board.

We already knew two main populations of company existed in the wild - the Traditional enterprise and the Web 2.0. The practices from the Web 2.0 were already diffusing throughout the entire environment. Most companies used social media, they thought about network effects, used highly dynamic and interactive web based technology and associated technology practices. The two populations were hence blurring through adoption of practices (i.e. the Traditional were becoming more Web 2.0 like) but also partially because past companies had died. But was there now a Next Generation budding, a new Fordism?

In early 2011, I interviewed a dozen companies that we thought would be reasonable examples of Traditional and Web 2.0 and where a couple of highly tentative Next Generation might exist. We developed a survey from those companies, removed them from the sample population to be examined and then interviewed over 100 companies divided roughly equally among those that described themselves as Web 2.0 and those who called themselves more Traditional. We examined over 90 characteristics giving a reasonable volume of data.

From the cycle of change and our earlier interviews, we had guessed that our Next Generation was likely to be found in Web 2.0 group and in terms of strategic play they would tend to be focused on disruption (the war phase) rather than profitability (the peace phase). From our earlier interviews we had developed a method of separating out into candidate populations.

I ran our analysis and waited. It was an edgy moment, one of those I’m well used to. Had we found something or as per many attempts before had we found nothing? I tend to assume nothing and when there is something, I tend to doubt it.

The populations all contained a mixed of medium and huge companies and within this we found statistically significant population differences across a large number of the characteristics. I re-examined, looked through my work, tested, sought the advice of others and tested again - but it remained. 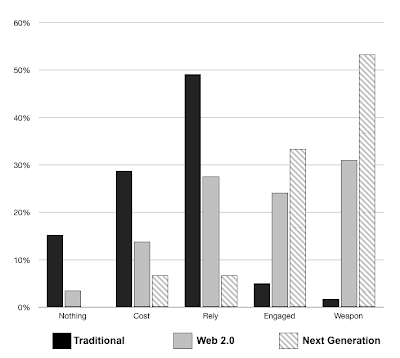 This difference in population was repeated throughout many characteristics spanning strategy, tactics, practice, activities and form. The odds of achieving the same results due to random selection of a single population were exceptionally low. We had found our candidate Next Generation.

To describe this Next Generation, it is best to examine them against the more Traditional. Some of the characteristics show overlap as would be expected. For example, in examining the highest priority focus for provision of technology by a company whether it’s profitability, enhancement of existing products and services, innovation of new products and services, enabling other companies to innovative on top of their products and services or creating an engaged ecosystem of consumers then overlaps exists (see figure 33). 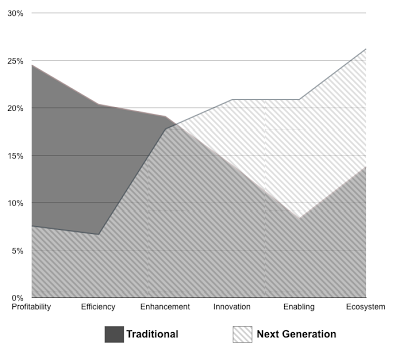 In other areas, the differences were starker. For example, in an examination of computing infrastructure and whether the company tended to use enterprise class servers, more commodity servers or a mix of both (see figure 34) However, it should never be expected that there are no common characteristics or overlap but instead a significant difference in specific characteristics (i.e. Mice have two eyes, same as Elephants).

Figure 35 gives the main differences (though not all) and we’ll go through several of these differences in turn.

Figure 35 – Difference between Next Generation and Traditional 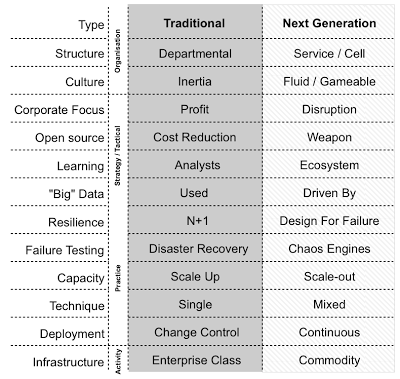 Structure
Traditional organizations used a departmental structure often by type of activity (IT, Finance, Marketing) or region. The next generation used smaller cell based structures (with teams typically of less than twelve) often with each cell providing services to others cells within the organization. Each cell operated fairly autonomously covering a specific activity or set of activities. Interfaces were well defined between cells.

Culture
In traditional organizations culture is seen as relatively fixed, difficult to change and often a source of inertia. In next generation the culture is viewed as more fluid and gameable.

Focus
Traditional organizations tend to focus on profitability (a peace phase mentality) whereas the Next Generation is primarily focused on disruption of pre-existing activities (a war phase mentality). This is not considered to be a long-term distinction.

Open Source (including Open Data, Open APIs etc)
In traditional organizations, the use of open systems (where source, data, APIs or other) is viewed primarily as a means of cost reduction. In some cases technology or data is provided in an open means.

In Next Generation, open is viewed as a competitive weapon, a way of manipulating or changing the landscape through numerous tactical plays from reducing barriers to entry, standardization, eliminating the opportunity to differentiate, building an ecosystem and even protecting an existing value chain.

Learning
Traditional organizations tend to use analysts to learn about their environment and changes that are occurring. The Next Generation use ecosystems to more effectively manage, identify and exploit change (more on this in the next section).

“Big Data”
Traditional organizations use big data systems and are focused primarily on the data issue. The Next Generation is run by extensive use of modeling and algorithms. Whilst the focus is not on the data per se but the models, these systems are not simply used but run the company.

The Next Generation has entirely different architectural practices from scale-out (or distributed systems) for capacity planning, design for failure for resilience and use of chaos engines (i.e. the deliberate and continuous introduction of failure to test failure modes) rather than single, time critical disaster recovery test. These mechanisms enable highly capable systems to be built using low cost commodity components.

Development
Traditional companies tend to focus towards singular management techniques for development (e.g. Agile or Six Sigma) and often operate on a change control or regular process of updates. The Next Generation tends towards mixed methods depending upon what is being done and the process of development of novel aspects is usually continuous with no specific time period for releases.

The LEF published the work in Dec 2011 and since then we have observed the diffusion of many of these changes. However, I very much don’t want you to read the above list and get the impression that “this is how we create an advantage!” but instead to be realistic. The above characteristics are already diffusing and evolving, tens if not hundreds of thousands of people and their companies are well aware. You’ll need to adapt simply to survive. Any real advantage has already been taken and the only advantage to be gained is over those who are slower to adapt.

The model suggested this in 2005 but I had to wait until 2011 to confirm this in its first instance (such is the slow nature of experimentation with companies). The above appear to be the characteristics of the New Fordism though it’ll take a decade or more to really confirm this.

By which time, if the model holds then the next wave of change (related to commoditization of the manufacturing process itself) will itself have created a new Next Generation, a ”New New Fordism” so to speak.  In much the same way every previous wave has created its own Fords – the Systeme General, the Plymouth and the American System, Fordism etc.

Now, who are the New Fords and is there any pattern to where this evolution is heading? Well, the former I’ll keep to myself (though many will be able to name several who are) whilst the latter I’ll discuss briefly when we talk about the future.

For now, it’s enough to know that co-evolution of practice can lead to new organizational forms and this is happening today. In the next section, I want to turn my attention specifically to the subjects of ecosystems and open source, after which we can revisit our map and get on with the really interesting stuff.

Previous post in series ... No Reason to Get Excited