In the previous section, I discussed the importance of interfaces for activities that commoditize and become components of higher order systems e.g. standard electricity supply, standard units of currency. There is a significant cost associated with changing these interfaces due to the upheaval caused to all the higher order systems that are built upon it it e.g. changing standards in electrical supply impacts all the devices which use it. This cost creates resistance to the change.

A similar cost also occurs with practices when they co-evolve with activities. From the earlier example on computing infrastructure, if the consumers of large powerful servers had developed estates of applications based upon the practices of scale-up and N+1, then as the activity evolved to more utility services those consumers would incur significant costs of re-architecture of the “legacy estate” to the new world. This cost creates resistance to the change.

You also find similar effects with data or more specifically our models for understanding data. As Bernard Barber once noted even scientists exhibit varying degrees of resistance to scientific discovery. For example, the cost associated with changing the latest hypothesis on some high level scientific concept is relatively small and often with the community we see vibrant debate on such hypotheses. However changing a fundamental scientific law that is commonplace, well understood and used as a basis for higher level concepts will impact all those things built upon it (see figure 23) and hence the level of resistance is accordingly greater. 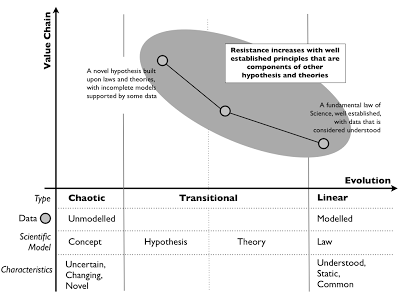 Such monumental changes in science often require new forms of data creating a crisis point in the community through unresolved paradoxes and things that just don’t fit our current models of understanding. In some cases, the change is so profound and the higher order impact is so significant that we even coin the phrase “a scientific revolution” to describe it.

The costs of change are always resisted and past paradigms are rarely surrendered easily – regardless of whether it is a model of understanding, a profitable activity provided as a product or a best practice of business.

As Wilfred Totter said “the mind delights in a static environment”.  Alas, this is not the world we live in.

So what makes up inertia and this resistance to change in Business? That depends upon the perspective of the individual and whether they are a consumer or supplier.

The Consumer
From the perspective of the consumer of an activity, a practice or a model of understanding that is changing then inertia tends to manifest itself in three basic forms - disruption to past norms, transition to the new and the agency of new.

The typical concerns regarding the disruption to past norms include: -

The typical concerns regarding the transition to the new include: -

The typical concerns regarding the agency of the new include: -


These risks or concerns are typical of the inertia to change we see with Cloud today. But it’s not just consumers that have inertia but also suppliers of past norms.

Suppliers of past norms.
The inertia to change of suppliers inevitably derives from past success. For example, let us focus on the part of the cloud which represents the shift of computing infrastructure from products to utility services i.e. infrastructure as a service (IaaS).

Amazon started this industry change in earnest in 2006 with the launch of Amazon EC2. As a company, Amazon had no prior business model in the sale of hosting (rental model of products) or servers (products) to consumers. As such, Amazon was not encumbered by any past business models and had no inertia to introducing this change. However, hosting companies and hardware manufacturers had significant inertia to the change caused by their past and successful business models.

From Figure 24, the shift from product to utility services is a shift from high value to one of volume operations and declining unit value.  Hence the existing suppliers would have needed to adapt their existing and successful high margin business models to this new world in order to initiate it. 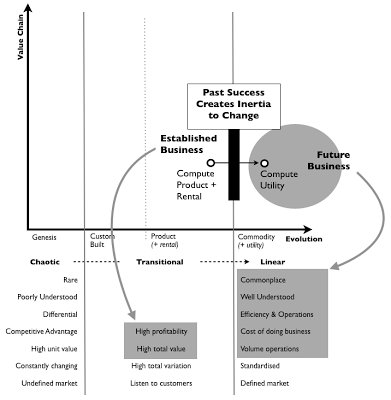 Such a change is problematic for several reasons: -


For the reasons above, the existing business model resists change and the more successful and established it is then the greater the resistance. This is why the change is usually initiated by those not encumbered by past success.

This resistance of existing suppliers will continue until it is abundantly clear that the past model is going to decline. However, by the time it has become abundantly clear and a decision is made, it is often to late for those past incumbents.

Why we’re often too late in making decisions to change
In the case of product competition (i.e. during the transitional phase) where competitors replicate a new feature, change is often a case of constant gradual improvement. In this environment sustaining change tends to exceed disruptive change and a method such as fast following is appropriate.

However the shift from product to utility i.e. the crossing of the boundary from transitional to linear is a significant shift. In this case, disruptive change tends to exceed sustaining.

For the existing supplier, they not only have to contend with their own inertia to change but also the   inertia their customers will have. Unfortunately, the previous model of competition (e.g. one product vs another) will lull these suppliers into a false sense of gradual change, in much the same way that our existing experience of climate change lulls us into a belief that climate change is always gradual. This is despite ample evidence that abrupt climate change has occurred repeatedly in the past, for example at the end of the Younger Dryas period, the climate of Greenland exhibited a sudden warming of +10°C within a few years.

We are as much a prisoner of past expectations of change as past norms of operating.

Hence suppliers, with pre-existing business models, will tend to view change as gradual and have resistance to the change which in turn is reinforced by existing customers (see figure 25)

Figure 25 - Inertia and Past Experience 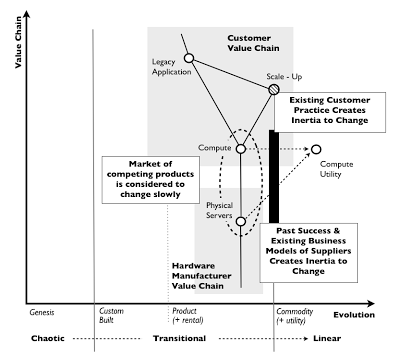 Unfortunately for these suppliers, the shift towards utility services has significant competitive effects for customers: -

As companies compete in ecosystems with others, then as any activity evolves they will need to adapt accordingly. The above effects of increasing efficiency, agility, innovation (as in genesis of new activities) and new sources of wealth for the consumers of the more evolved activity will tend to turn a trickle into a flood as the pressure to adapt increases as more competitors adopt the change.

In the case of Infrastructure as a Service, we see all of these effects.

It’s the exponential growth part that catches most past suppliers out and that’s due to this expectation of gradual change due to the previous competitive stage (i.e. product vs product).

To explain this, I’ll use an analogy from a good friend of mine, Tony Fish.  Consider a big hall that can contain a million marbles. If we start with one marble and double the number of marbles each second, then the entire hall will be filled in 20 seconds. At 19 seconds, the hall will be half full. At 15 seconds only 3% of the hall, a small corner will be full.

Despite 15 seconds having passed, only a small corner of the hall is full and we could be forgiven for thinking we have plenty more time to go, certainly vastly more than the fifteen seconds it has taken to fill the small corner. We haven’t. We’ve got five seconds.

Hence for a hardware manufacturer who has sold computer products and experienced gradual change for thirty years, it is understandable how they might consider this change to utility services will also happen slowly. They will have huge inertia to the change because of past success, they may view it as just an economic blip due to a recession and their customers will often try to reinforce the past asking for more “enterprise” like services.

Worst of all, they will believe they have time to transition, to help customers gradually change, to spend the years building and planning new services and to migrate the organization over to the new models.

Alas, Amazon alone is estimated at $2bn in cloud revenue for 2012 and predicted for almost $4bn in 2013. If that growth rate continues then by 2016 they will be in excess of $30 billion in revenue. They also have rapidly growing competitors such as Google.

The cold hard reality that many existing suppliers probably don’t comprehend is that the battle will be over in three to four years and for many the time to act has already passed. Like the rapid change in climate temperature in Greenland, our past experience of change does not necessarily represent the future.

In industry, we have a long history of such rapid cycles of change and inertia is key to this. These cycles we call “revolutions” as in industrial, mechanical and the revolution of electricity. During these times, change is rapid not gradual and disruption is widespread.

In the next section we will explore these "revolutions" more after which we can take all that we have discussed and apply it to that first Fotango map.