Many moons ago I deconstructed Gartner's hype cycle from the underlying market dynamics and demonstrated how it couldn't be based upon any form of physical measurement but instead the aggregation of analyst's opinion. The effects of the hype cycle pattern appear real enough, just the hype cycle graph isn't some actual measurement of change just perceptions.

As an aggregate of Gartner analyst's opinions this has some value if you assume analysts know more about the market than your own people. If not, then any large company should simply build their own hype cycles. However, that's not the point of this post.

The point of this post is that whilst all the hype cycles have identical patterns, shapes and phases the axis keep on wandering i.e. we have :- 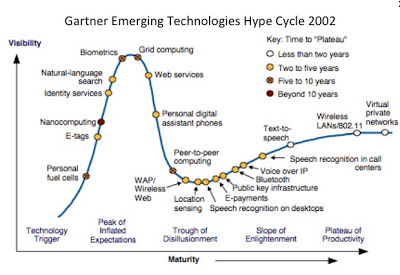 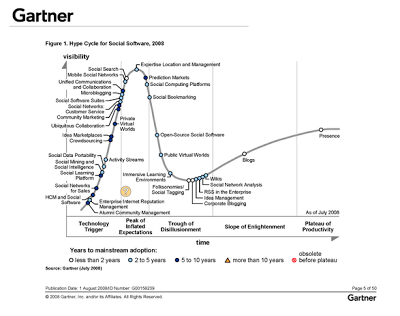 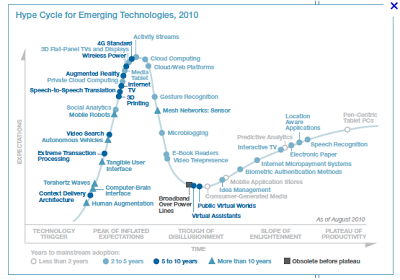 You could make a case for this being simple renaming as in Visibility and Expectation are the same. I have difficulty in accepting that. However my difficulty level reaches new heights with changing Time to Maturity as though the process of evolution (i.e. how something becomes mature or fit for purpose) had a linear relationship with Time.

I know, I know ... the Hype cycle isn't "real" as in it's not a scientific measurement of a physical characteristic but instead it is just aggregated opinion and therefore I'm being petty. It's just a visualisation of perceptions and is obviously evolving itself.

I understand all of this.

It's just that it gives the impression of being actual physical measurement, a graph of something tangible that can directly investigated. Hence changing the axis drives me nuts.

I should shrug it off and look forward to Expectation over Maturity (which they seem to have missed) and bizarrely enough is the pattern which appears to be most "real". Another story, another day.
Posted by swardley at 2:56 pm