Why Agile, Lean and Six Sigma must die ...

Every large system (whether a line of business or specific IT project) contains multiple components. Those components have a relationship with each other (known as position) but they're also evolving.

Every components start as something novel and poorly understood - the uncharted space of the new e.g. the first telephone - and over time through demand and supply competition becomes widespread and well defined or in other words industrialised. The properties of these two extremes are polar opposites. As Salaman & Storey said in 2002, any structure needs to manage both of these polar opposites. Before you shout "Bimodal" or "Two Speed" or "Dual Operating System", there's also the issue of the transition between the two but we've covered that in previous posts.

If you start with user needs, you can map this landscape out in the form of a Wardley Map - named after me! Well, I've been doing this for over a decade now and I did invent the technique, so fair enough. What's interesting with maps is that they not only give you position (the relationship between things) and movement (how things are evolving) which is essential for any form of strategic play but you also find that different techniques and methods (i.e. doctrine) whether it's project management or purchasing are stronger at different parts of the map. None of this is new. 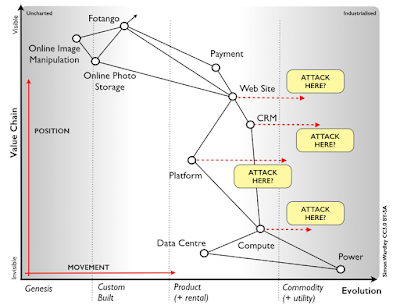 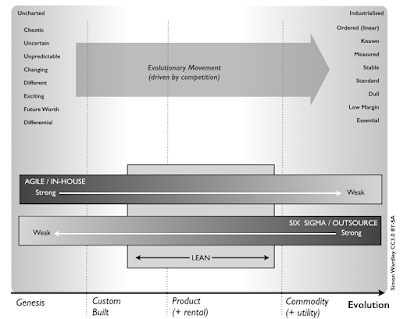 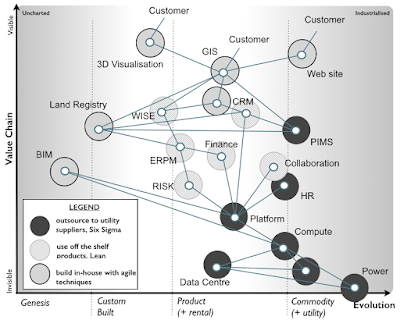 Maps are mainly communication vehicles but they're also useful for organisational learning. However, when it comes to doctrine (e.g. techniques & methods) in IT, let us emphasise the following.

In one part of the map you'll tend you use an Agile approach (right back to the core principles, possibly with a technique like XP or SCRUM) focused on exploring the uncharted and reducing the cost of change. As Michael O. Church points out, agile is best in situations when "dealing with finicky clients who don’t know what they want" i.e. when exploring the uncharted space where no-one knows what is wanted.

Of course, as an act is explored and becomes more widespread and well defined (i.e. we start to understand it) then the focus changes. We start aiming to build a product, sometime in era of custom built examples. Whilst we may continue to use underlying techniques such as XP or SCRUM, our focus is on reducing waste, learning and creating a minimal viable product and improving measurements. Lean rules the waves here.

Of course, as the act continues to evolve becoming more widespread and defined then we're now into the world of volume operations. It's increasingly heading towards commodity and our focus is mass production of good enough which means reducing deviation. At this point, Six Sigma (along with frameworks like ITIL) rules the waves.

However, any significant project (as show in figure 3) has components in all these stages. Those components aren't static but evolving and as they become more commodity like they enable rapid development of new higher order systems. But, at any one moment in time, you'll have components at all stages and you will need to use a mix of agile, lean and six sigma throughout the project.

Of course, most companies have no map of their environment and so are forced to plummet for a one size fits all method e.g. all agile, all lean, all six sigma. All of these methods will have their devotees and so regular arguments of agile vs lean, lean vs six sigma, agile vs six sigma break out along with various attempts to create new magic one size fits all methods which combine different stages e.g. lean six sigma or agile lean or prince agile etc.

This has been going on in one guise or another for a decade now. Suck it up. There's no one size fits all method. [Cue endless rants from agile, lean or six sigma devotees].

You need to use the appropriate methods according to how evolved the component is. Since most companies have no form of maps (i.e. no understanding of position AND movement) or confuse box and wire diagrams (e.g. IT systems diagram, Value Stream maps, Business process maps, Kaplan Strategy Maps - which all have uses) with maps then generally there is no hope of this happening. If you're going to insist on acting blindly and picking a one size fits all method then choose Lean. It's far from ideal but better than focusing on the other extremes.

Personally, I'd learn to map and use all the methods. Personally, I think the idea of being ALL agile, ALL lean or ALL six sigma should die.

I know it won't. A decade of using maps, speaking and writing articles in various publications that point out the need for multiple methods has taught me one thing. In a decade from now, I'll still be hearing people arguing over whether agile, lean, six sigma or some equivalent method is better everywhere. It isn't. It'll never be. Alas, there are two solutions to Ashby's Law of Requisite Variety in management - you either accept the complexity and manage it or you pretend that what is being managed is simple and apply single methods or simple KPIs. The latter tends to rule because the former is hard.

Before I go, some quick notes on the question of strategic thought and mapping. The two most basic properties of a map are position and movement. It doesn't matter whether this is a physical map or a chessboard, they show you where things are and how they can move. More complex maps can include other details. For example in a Wardley map, along with position and movement then you can look at the flow of information, risk and finance in an existing value chain (NB. Value Stream maps also do this but they only show flow within the value chain and not movement i.e. how components will evolve). Without position and movement though, strategic play is guess work.

Hence, look at table 1, print it out and tick off each area that your business knows well or undertakes.

Table 1 - Understanding of the Purpose, Climate, Landscape and Doctrine. 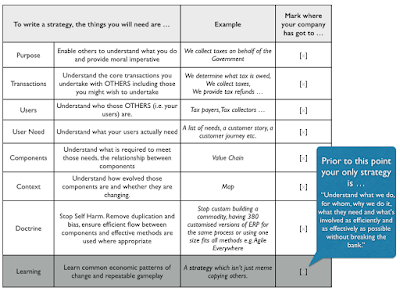 If you haven't ticked off ALL of the first seven steps then any strategy you have is most likely meme copying others. You're running blind and you don't have a hope of understanding where to attack and hence determining why here over there. I strongly suggest you throw away your strategy and replace it with the following ...

Our strategy is to try and understand what we do, for whom, why we do it, what they need and what's involved as efficiently and as effectively as possible without breaking the bank.

... or at worst, don't pay consultants for any future strategy - just click the link here. It'll auto generate you a strategy based upon the common memes around. It's useless but it's free rather than being useless and costing a fortune.

Until you can do the most basic stuff of understanding purpose, landscape (map) and doctrine (methods, techniques etc), there is no point in talking strategy. Anything you'll do is just simply shooting in the dark.

Oh, and to really rub it in, I'm going to emphasise the point about the importance of movement. I've taken a simple process diagram, replaced the terms with letters and provided this glorious BOX and WIRE diagram in figure 4. 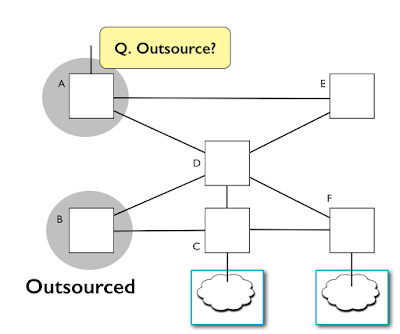 Now, in the above you can clearly see the relationship between things but I've got four simple questions for you to think about.

a) I outsourced B and it was a disaster. Why was it a disaster?
b) Should I outsource A?
c) What components are most directly visible to its consumer?
d) What methods (i.e. doctrine) should I use for each component? Agile, Six Sigma or Lean?

Can you answer these? I can't. For your interest, in corporations around the world people are trying to manage stuff and answer these questions with diagrams just like the above.

Ok, I've now provided exactly the same diagram in mapping form in figure 5. No additional information was added other than position and movement. 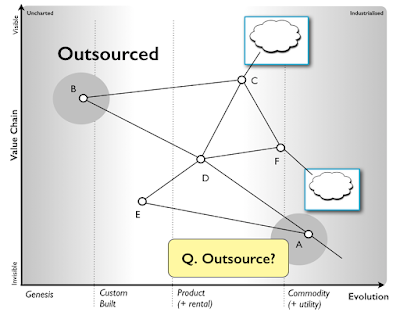 Now, try answering those questions. If you need help, look at figure 2 above again. It should be trivial.

If you want to know how to organise around this. Start here.
If you're entirely new to mapping then this set of posts should help.

If you're thinking ... "is this mapping the answer!" Let me emphasise that we're roughly at the Babylonian clay tablet stage and not the ordinance survey stage of business mapping. This technique will give you a better map than no map.

Finally ... the only people who can map a business are those that operate in that business i.e. no consultants. The technique is all creative commons share alike, so you've got everything you need to get started.
Posted by swardley at 7:16 pm