In this post I'd like to discuss why I believe video games will become a new battleground for the soul of a country.  Before I start, I will need to cover some basics. However, I'm also going to have to make a few assumptions including :-

a) that you know how to map

b) that you've read my posts on mapping culture

c) you're familiar with my discussion on the issue of digital sovereignty.

If not, well you might struggle with this but let us try it anyway. I'm going to start with the latest version of the culture map and dig a little bit more into several parts. I'm going to do this through a lens of power. 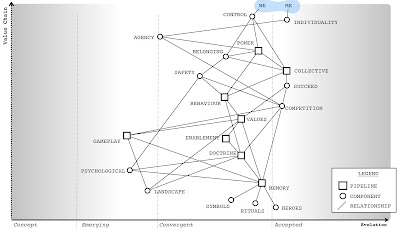 The map is an imperfect representation of the concept of culture itself including the components that make it. At the top of the map are the two anchors of "Me" and "We". How much do we focus on ourselves and how much do we focus on others and the wider society. Each of us have a bit of both. In some collectives (i.e. some nations) there is a stronger "We" focus, in others it's more about the individual. You can see some of this in the nation state responses to COVID.

When we focus on the "We", we're focused on our collectives ability to control our environment (see figure 2 below). It's all about power with others i.e. we can defend or build a new land, we can create freedoms for everyone. Often this is represented through concepts like co-operation, labour unions and in our social contract to each other. As MLK pointed out "the freedom of collective bargaining” has been critical to many of our most cherished rights. 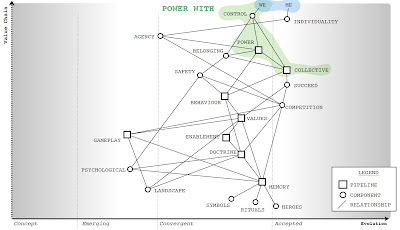 When we focus on the "Me", we're focused on our individuality and our agency i.e. our ability to make choices, to change things and to exploit the environment to suit ourselves. Not everyone has the same agency. In the West, the wealthy have more agency than the poor. As the Adventures of Stevie V would say "money talks". That agency requires us to have some power over the collectives that we belong to and hence power over others. Often this is represented through concepts like hierachy, ownership and exclusion. I've show this in figure 3.

figure 3 - the culture map and agency 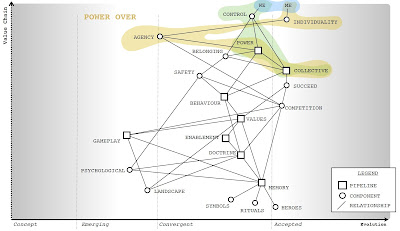 But there is another form of power worth noting. That is the power that I have but which I gift to others. The behaviour of gifting often appears in collectives that have strong beliefs (i.e. values) on sharing. For example, many sections of the open source movement are based upon these beliefs. Not all mind you, some collectives (and companies are collectives, same as nations, families, churches and any group of people) view open source as more of a marketing tool or as a means to accelerate the diffusion of their products or as a form of gameplay to undermine competitors. What they tend to believe in is diffusion of their product which is not necessarily the same as sharing. Hence you can often see a different set of behaviours with such open source companies changing licensing rules because others in their communities are being more successful. Yes, it's "open" but they want to retain power over others rather than it's open and we've gifted power to others. I've represented this in figure 4 and the link from power through behaviours (i.e. sharing of power) to values (i.e. we believe in sharing).

figure 4 - the culture map and gifting power to others. 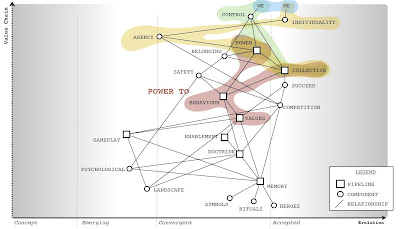 In the above there are three basic types of power - with, over and to. Now, why the connection to the Adventures of Stevie V?

Well, there are many ways to adjust the beliefs (i.e. values) of a collective. You could nudge behaviour (encouraging more of this, less of that) or create new threats (i.e. new collectives we're competing against). As an aside, it's worth noting that when we are in competition, there are many forms of gameplay that can be deployed e.g. direct conflict, co-operation, alliance and collaboration. Your choice of gameplay maybe limited by your values i.e. direct conflict does not suit a collective that is focused on the "We" and sharing. However, we can use that threat of conflict to change our own values and hence enable other forms of gameplay. You can also influence values by embedding them in technology but we covered that in the "Digital Sovereignty" discussion. Another way to change values is to alter memories i.e. rituals, symbols and heroes. The most effective way to do this is with Art.

Art is a powerful means of changing values and hence behaviour in others. Hollywood and Walt Disney was used to promote Western values, Bob Dylan became the bard that crystallised the values of the 1960s, even a song like "Money talks" can have some influence.

So what about video games?

Let us first skip past the tendency of the industry to try and turn children into addicts with cheap psychological tricks in return for money. Yes, it's abhorrent. Ignoring that, the games themselves have values embedded within them whether it's belief in property (the hoarding of gold coins) or fairness or sharing or whatever the creator wishes. The very act of creating a video game will embed our values within it whether the action to add them was conscious or not. Video games are now so widespread and immersive that they must be considered a powerful channel for spreading values and they rival radio, television and film. These are all enablement systems for values, allowing our values to diffuse to other collectives. Unfortunately as with digital sovereignty, as with Brexit, as with COVID and as with most aspects of life then we don't map or even understand the basic components of the supply chain. That doesn't mean others can't or won't exploit this space.

If you think China is simply reducing video game usage in children for reasons of addiction, I would suggest you consider that it is also limiting exposure to unfavourable beliefs. In the battle between nations, kinetic warfare occurs when all other means have failed i.e. direct conflict is the lowest form of warfare. Whilst alliances, collaboration and co-operation are far better, the most powerful forms are when you simply persuade others to just become you by altering their behaviours, values, memories, rituals ... you get the picture ... or was that the Hollywood blockbuster?

Others are starting to explore these areas i.e. sugar games and project violacea, These forms of play will no doubt intensify with the development of progammable video (with systems like Synthesia) as the virtual and real worlds blur. You'll not only have to face the prospect of artifical collectives radicalising people in social media (something which has to some extent become industrialised) but also the programming of values into children through the games they play.

Well, it's happening already even if it is accidental. Fortunately, people are starting to talk more about this subject i.e. Tyler Cowen on How Gaming Will Change Humanity as We Know It.

The new battleground will be video games and I don't just mean running around fragging some newbie.