These days I use maps of organisations to apply a cell based structure ideally using a Pioneer, Settler, Town Planner model.  The map is based upon a value chain (describes the organisation), how things evolves (describes change) and the changing characteristics of activities, practices and data from two extremes (the uncharted to the industrialised) - see figure 1. 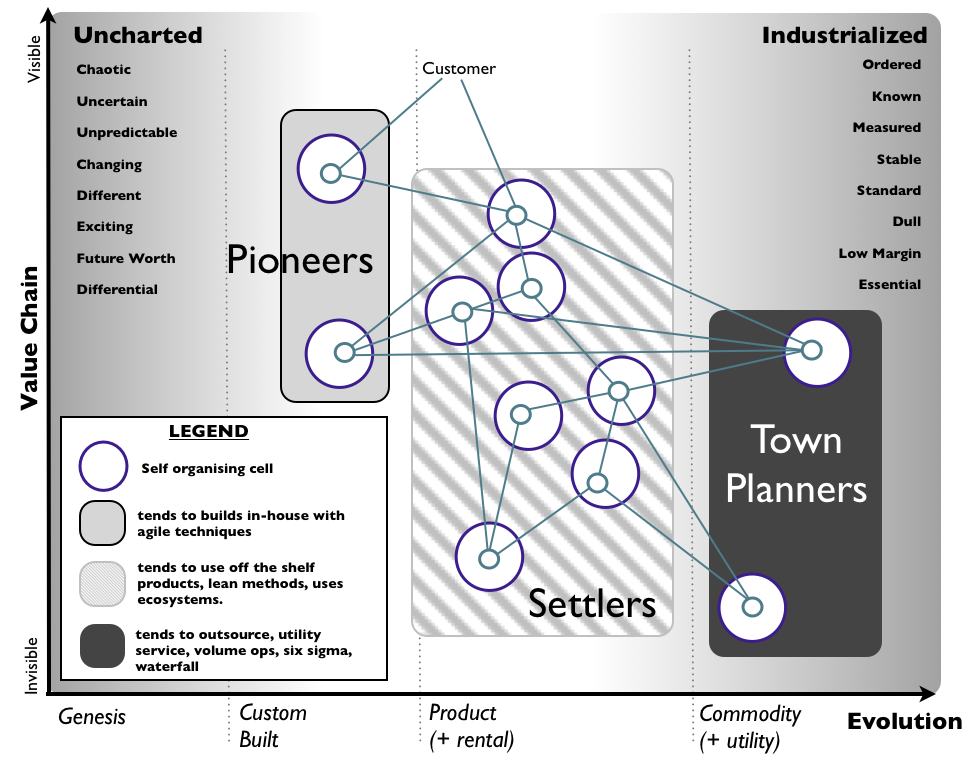 I use these maps across many business and governments to reduce duplication, bias & risk whilst improving situational awareness, gameplay, correct use of multiple methods & communication - see figure 2.

Figure 2 - Map of a Media Company. 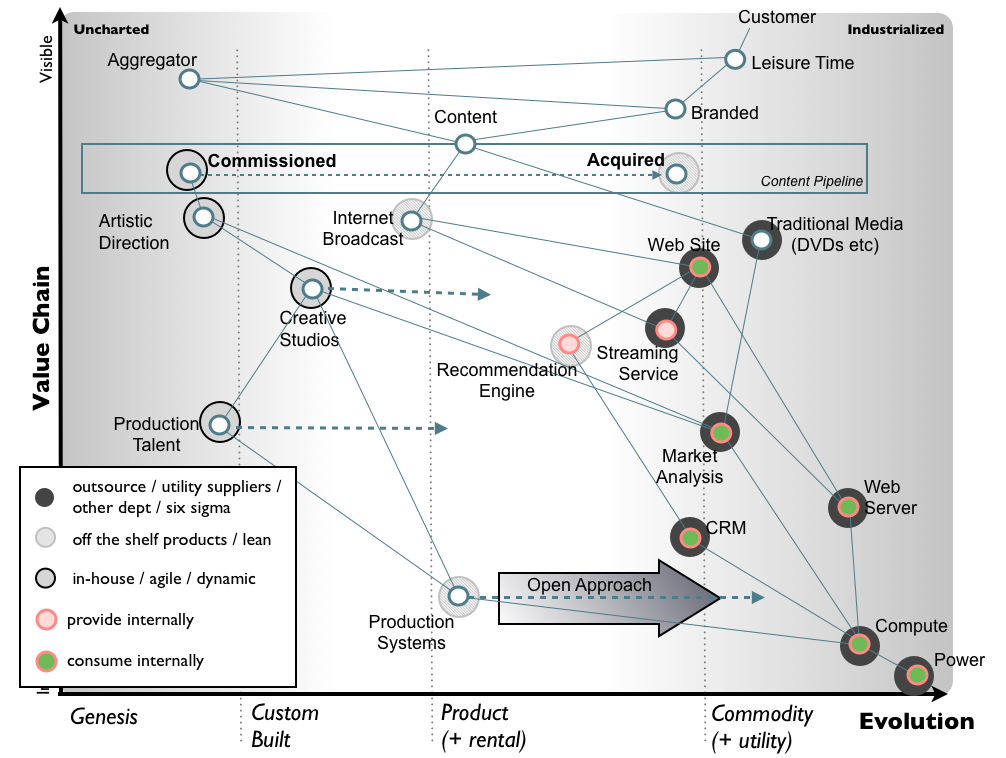 Key to mapping is the evolution axis i.e. you can't actually anticipate change over time in any effective manner (we don't have a crystal ball). See figure 3. 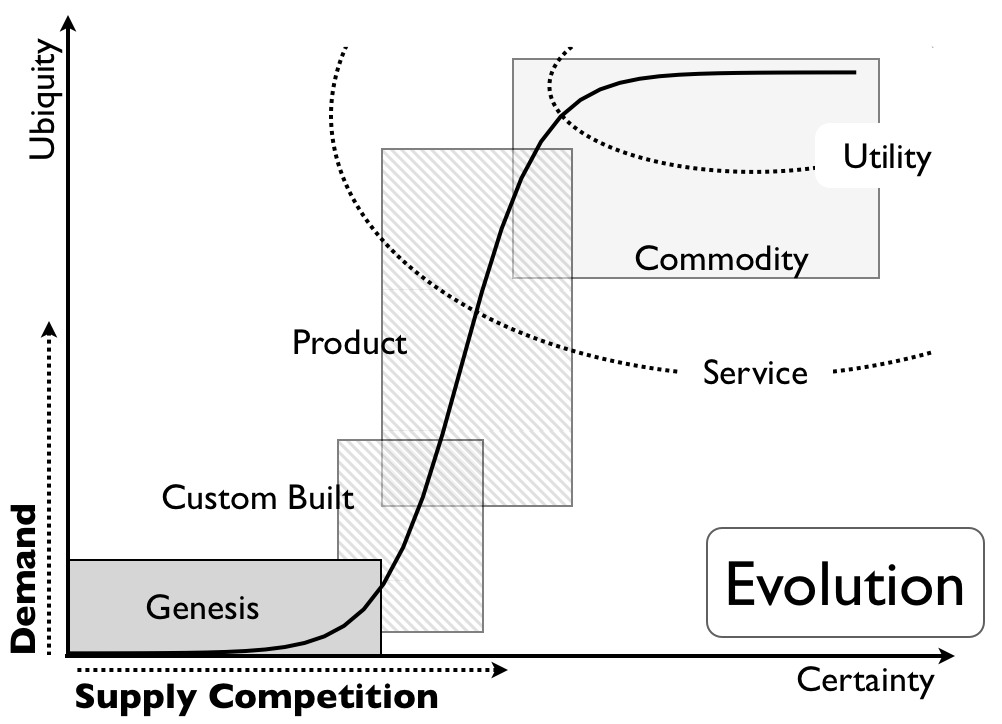 A bit of HISTORY.

My early attempts to map an environment were a disaster because I attempted to use time and time based sequences to measure change. I eventually postulated a path for how things evolved and presented this at Euro Foo 2004, EuroOSCON 2006 and many conferences in between. - see figure 4. 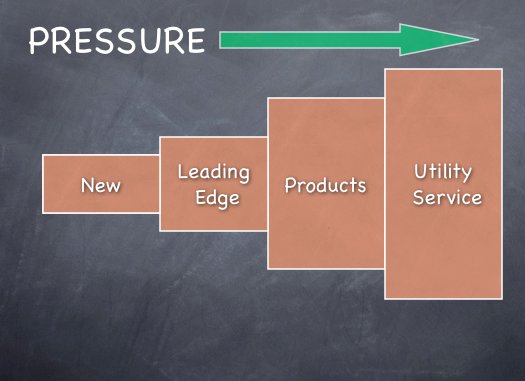 This path is what I used to create my early maps in 2005 (though James A. Duncan tells me it was 2004). The problem was, I couldn't demonstrate the path was based upon anything other than a concept. It took until 2007, to collect the data necessary to demonstrate that the evolution path (see figure 3 above) had some merit.

In those early years, I also used to refer to how different methodologies were required e.g. figure 5. 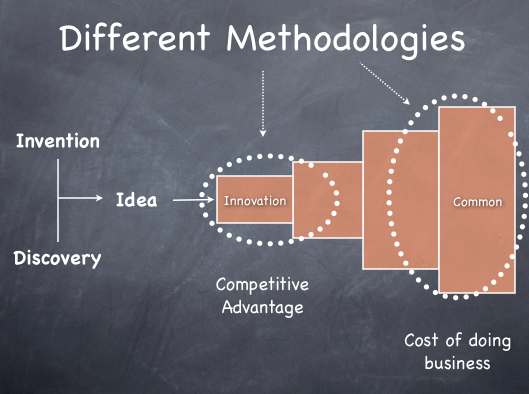 This was based upon the innovation paradox of Storey & Salaman, Theories about the process of innovation, 2002

But it wasn't until 2007 that I could clearly demonstrate the changing characteristics of activities, practices, data and knowledge as it evolved. This I have spoken about at literally hundreds of conferences and video talks to hundreds of thousands of people around the world using various examples (e.g. figure 6 and figure 7)

Figure 6 - Characteristics of Innovation (as in a novel thing) [from Web Strategies 2008]. 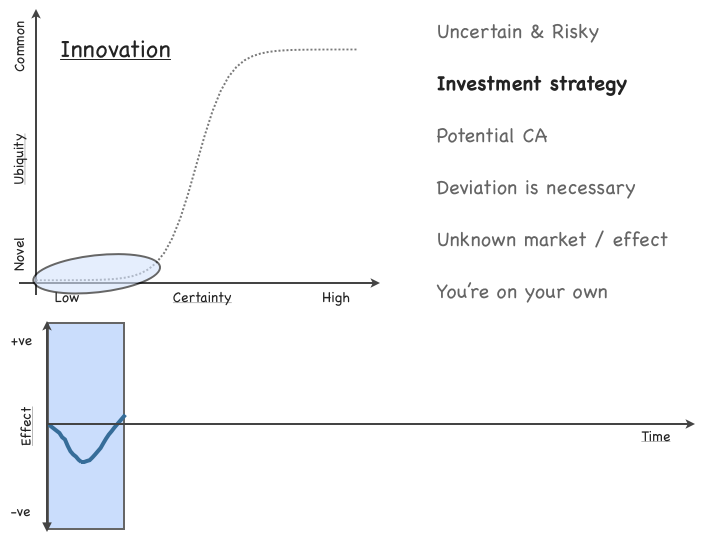 Figure 7 - Characteristics of the same activity as it evolves to commodity [from Web Strategies 2008]. 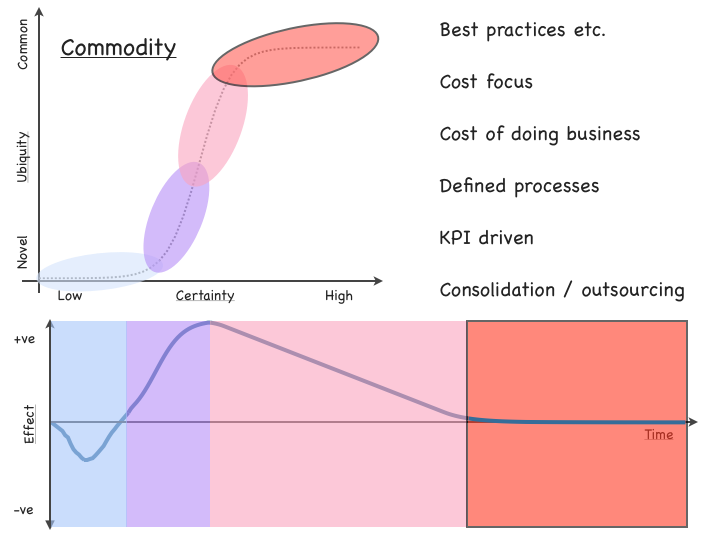 This also helped explain why the Pioneer, Settler (or what I used to call Colonist) and Town Planner structure worked. I had introduced this structure many years earlier (2005) to replace a failing two bit mode model before it - see figure 8. 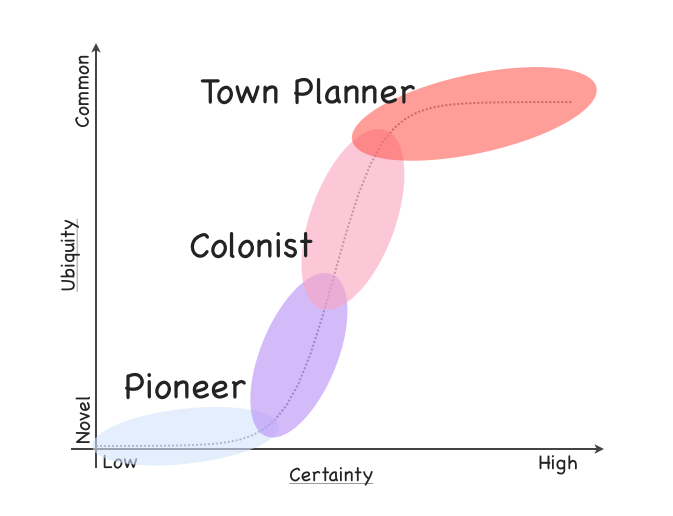 The Pioneer, Settler and Town Planner model is a derivative from Robert X. Cringely's model of Commandos, Infantry and Police in the 1993 book, Accidental Empires.

Of course, some of the terms have evolved over the years to make them more meaningful whilst the basics remain as is.
E.g. take a look at older presentations and you'll see many of the same concepts just with different terms.

Today, what amazes me is that companies are starting to realise that one size methods don't work. I hear talk of bimodal, two speed IT and dual operating systems for a company.

Why does this amaze me?

There are a few exceptional leading lights from very early on - Robert Strassmann and Robert Cringely come to mind - but the leading edge of companies were exploring these topics around 2002-2008.  I know, I was there helping the discussion to happen. After this, the early adopters started to appear (Silicon Valley Startups etc). Increasingly I see this work in various Governments.

However, all of a sudden in 2014 - an old model, not cognisant of how things evolve, long thought dead has raised its head. The bimodal, two speed IT, dual operating system is becoming a very popular concept within what I describe as legacy companies. We're talking ten years late to the party and getting the wrong address.

This feels like inertia. A hope that adding lipstick to the pig will somehow keep the pig alive.

Mapping, use of a three party system, the extremes of uncharted to industrialised are not new. Despite refinement to the terms, this stuff is all nearing or over a decade old. The field has moved on since then into understanding common economic patterns, weak signal analysis and other forms of organisational learning.

By the time something of use gets written in a book or a publication, the value related to it has often been extracted long before. You can't get to the bleeding edge of competition by reading books or publications. You have to live it. Even models like pioneers, settler and town planner are starting to feel dated and being examined through lenses of a continuous spectrum and other structures.

The laggards are nowhere near getting to the spaces where the leading edge have long since moved on from.

The gap appears to be widening.

I used to think the gap between the leading edge and laggards was five to seven years, it now seems like fifteen or possibly much more (i.e. how long it will take the laggards to catch up with where the leading edge is today). This may be a normal consequence of inertia, an acceleration in the underlying cycle of change combined with poor situational awareness - of this, I'm not sure. It needs testing.

However, within the laggards it does feel as though the copying of easy to digest memes appears to be more rampant, circulated by those who benefit from the memes to those that need an 'easy solution' in a marriage of convenience. As Rosenzweig once said

“Managers are busy people, under enormous pressure to deliver higher revenues, greater profits and ever larger returns for shareholders.They naturally search for ready-made answers, for tidy plug-and-play solutions that might give them a leg up on their rivals. And the people who write business books – consultants and business school professors and strategy gurus – are happy to oblige.”