The necessity of incompetence in Strategy

Some time back, I collected a list of common terms used when describing a strategy. I called these Business Level Abstractions of a Healthy Strategy (or Blahs) for short. I then created a Blah Template, auto-generated around 64 strategies by randomly inserting the Blahs into the Blah Template and then circulated them. An example of one of these randomly generated strategies in provided in figure 1. 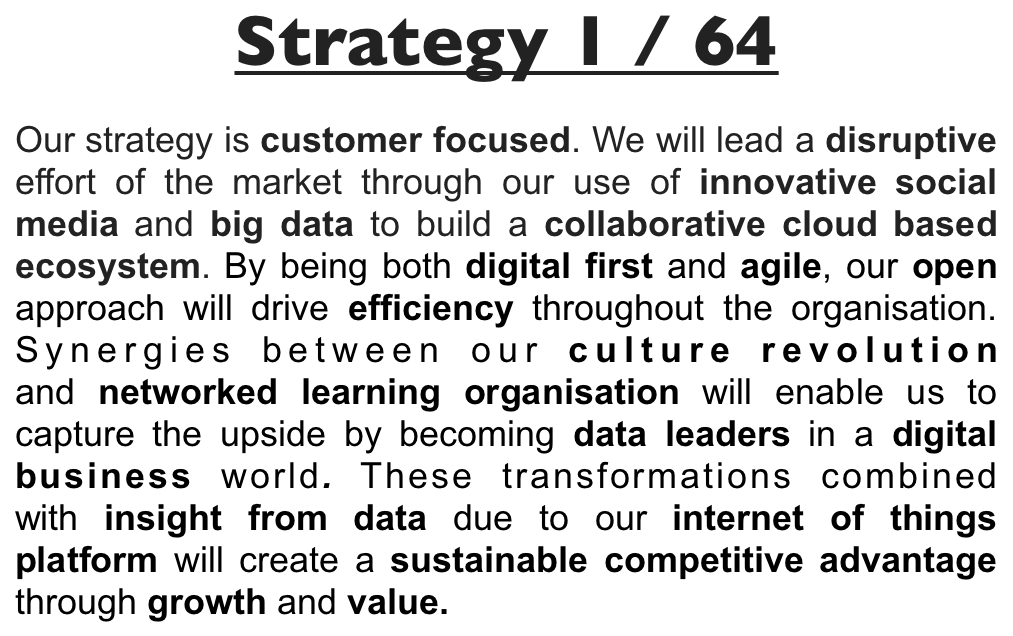 The responses I received back (over 400 in total now) basically confirmed something I already knew. Meme copying is rife in our industry as opposed to strategy based upon the context.

I've demonstrated to many (i.e. tens of thousands of people) on how to use mapping to improve situational awareness in an organisation and improve performance on many common issues from user needs to risk management to team structure to collaboration to communication ... it's a dull and mainly operational list and since I've been doing this for a decade, I tend to get a bit bored by it. However, it is pleasing to hear more and more examples of its use.

If you're new to mapping, then I've written an article for CIO Magazine on 'An introduction to Wardley Mapping'.

Mapping's real power (and the bit I do get some enjoyment from) comes in strategic gameplay because it provides a way of seeing both position of components in the landscape and how those components will move. This gives you the opportunity to identify where you can attack which is the first step in creating a strategy (see figure 2) 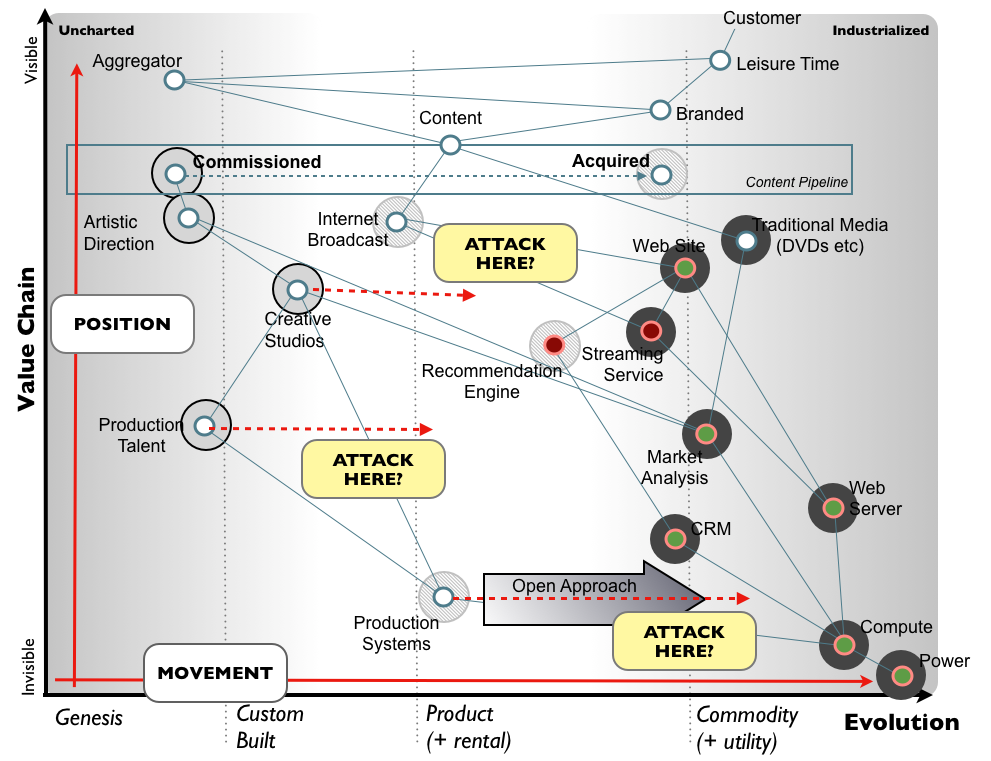 Let me be clear. I hear a lot of strategy based upon low levels of situation awareness. These all include the same characteristics including verbal reasoning, backward causality, large documents focused on telling a story, lots of memes, a tyranny of action (the how, what and when) with vague hand waving "why" and no concept of where (position and movement). These documents serve no useful purpose other than to create misalignment and miscommunication issues in an organisation. Hence encouraging your competitors to write such documents is always a good idea.

High situational awareness environments use visual reasoning, position and movement, are context specific and don't suffer from the alignment and communication issues that are often rife in their opponents.

Today, by simply looking at the level of strategic play and awareness between a group of companies, you can often determine the outcome of the battle well before it has started. If one has high levels of situational awareness and the rest have low levels then you already know what's going to happen. If however the levels are about the same (in practice this means they all have low levels) then it's down to lucky breaks, individual performances and some aspects of culture. I don't expect you to believe me (it's not what most management books tell you), I'll just provide figure 3 and leave with a caution that the level of play is changing and in the near future it'll be much harder to distinguish between companies. 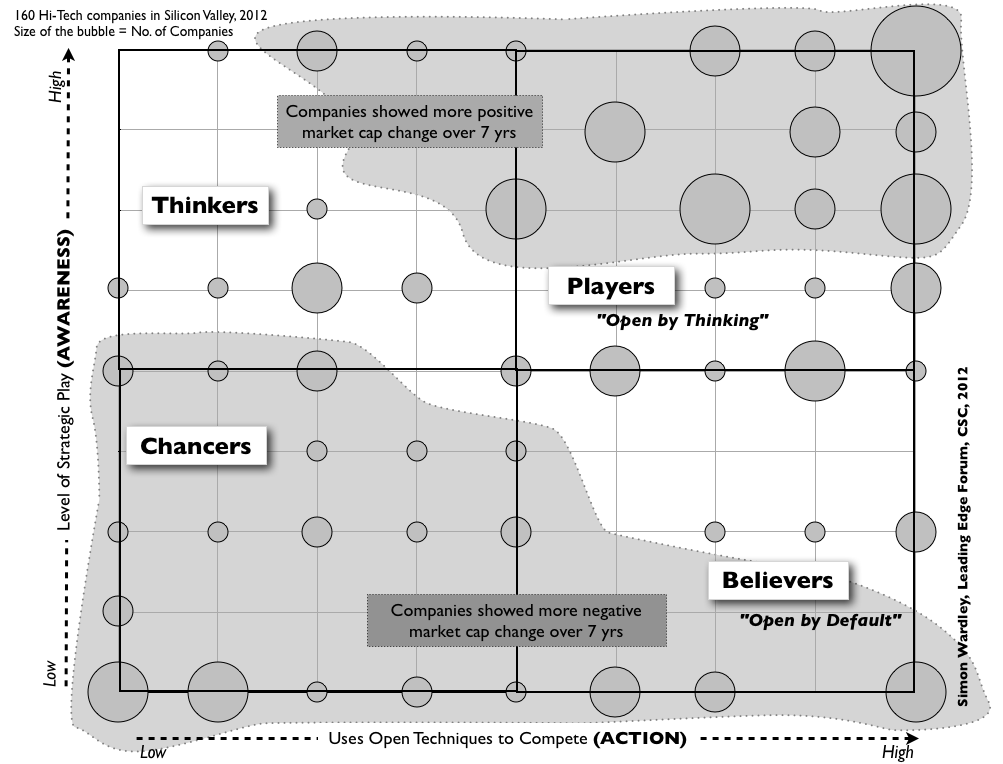 Now when it comes to strategic play, this requires a lot of thought, experience and a fair amount of scenario planning. Whilst you can often quickly produce a map (in a few hours), you need to share it within the organisation, compare to competitors, look up and down the value chain (including mapping your customers, suppliers) for opportunities etc. There's a lot to consider from the landscape, to your capability and those of competitors, to your organisations capability (and what needs to be developed) to points of change that can be anticipated to weak signals to economic patterns to constraints. I've included this in figure 4 as a reminder.

Figure 4 - What you need to think about. 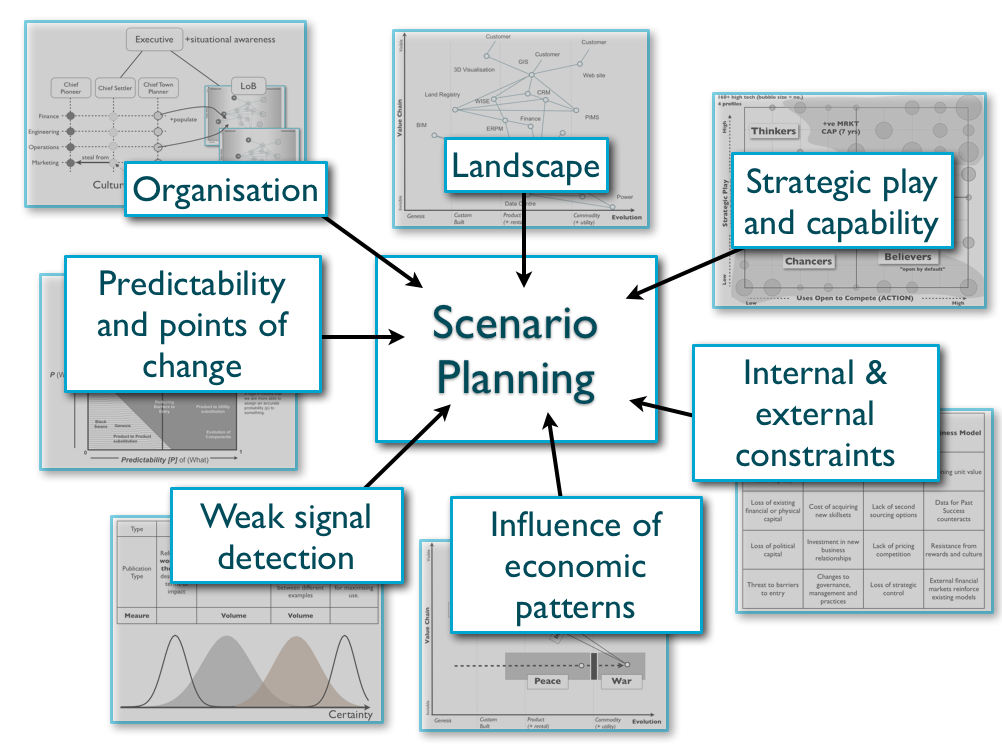 Into this mix you need to have a good idea of the points of change heading towards you (figure 5) and then a pretty good understanding of the types of games you can play. Any strategy will contain many games applied to the context (i.e. the map of the landscape). A list of such games (a toolbox) including those rather tedious operational ones is provided in figure 6. 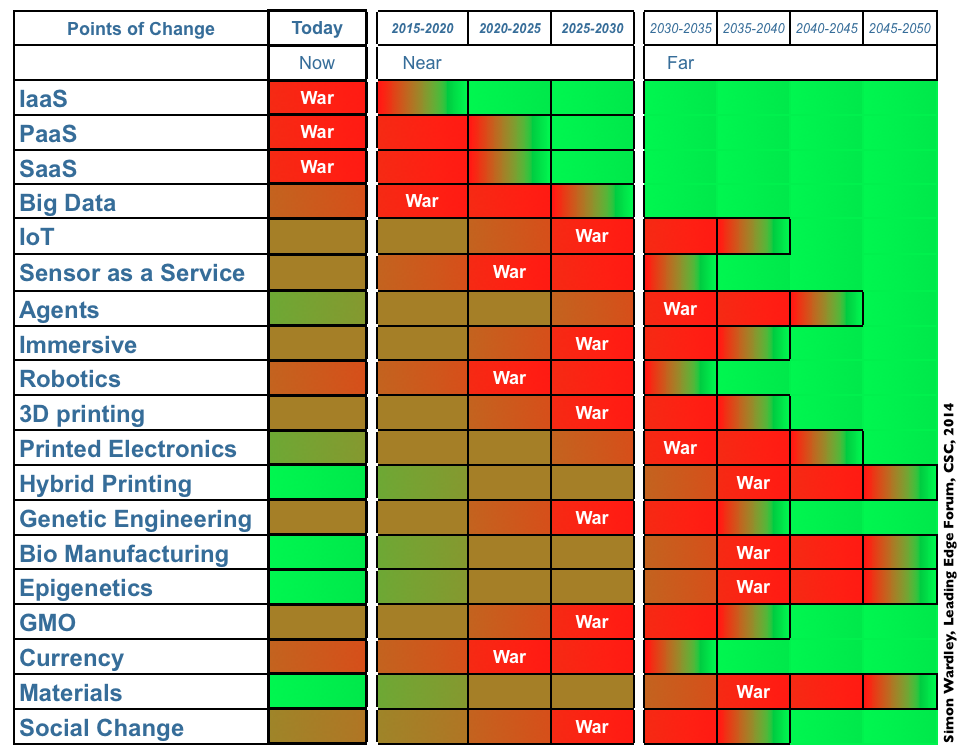 Figure 6 - A toolbox of Game Play 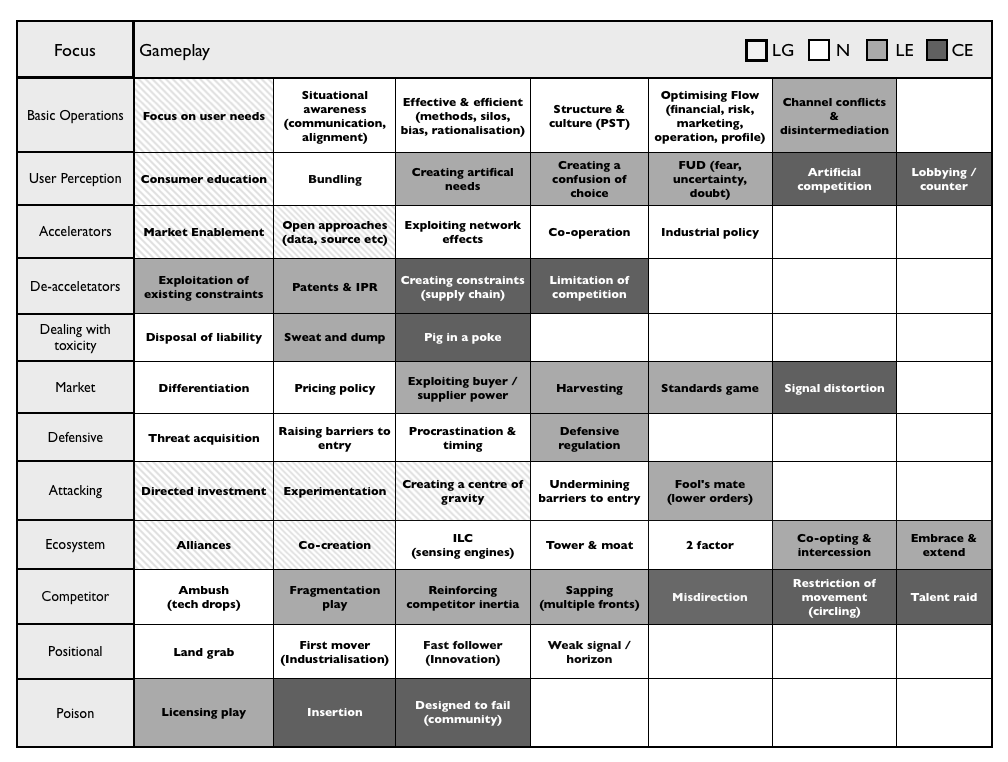 Now some of those games are slightly more evil than others. You're also unlikely to get away with using one gameplay but instead you'll need many and they're all context specific. Hence I might look at my map of the TV space (figure 2) and decide I'm going to :-

1) Play a Fool's mate with creative studios by commoditising production systems through direct investment in an open source approach.

2) Based upon the likely war to appear in Big Data, the consequences it'll have over 10 -15 years,  the importance of data to my industry then
3) Given a threat of future intelligent agents generating shows, I might want to slow down this process of evolution. I can look towards patents or acquisition of any threats or even try to create a deliberately designed to fail open source project to put off any future attempts.

4) I'd probably want to see more aggregated sites (e.g. Netflix, Amazon etc) so I'd look to undermine barriers to entry and maybe mix in some form of standards game against them.

5) I'd also want to strengthen my differentiator of artistic direction, so I'd look to reinforce a centre of gravity in this space by hiring stellar talent, promoting our artistic capabilities etc.


Ok, the above took about five minutes to write and it's not worth a bag of beans and most of the play is close to the downright evil side (comes with its own risk). Fortunately, this is just illustrative. However, if I was doing this for real then I'd spend at least a day going through all sorts of potential opportunities, revenue pivots etc before getting to a decent strategic play. Yes, with experience then sometimes you can spend a day or two covering scenario planning and strategic play for a moderate sized company that you're running. Please note the emphasis. You're playing the game, you have to do this.

I cannot emphasise this enough but get a bunch of consultants in to write your strategy and you'll end up with an overpriced document with little or no situational awareness but lots of good stories. At best they can provide you with game plays that you might consider but you need to apply this to your context. I know that sounds a lot harder than the easy to use ready made answers that the industry peddles but it does become easier with practice.

Once I've determined my play, I'll try to mark up as much as possible on the map (or usually maps) and maybe have another short document (i.e. one page or two) with more details on the main strategic plays. I wouldn't spend more time on this because the map and the game plays are just a guide to direction of travel. There is no such thing as a perfect map, all maps are imperfect. All maps change. You're going to have to adapt along the way and get used to it.

However, when it comes to the outside world then I'd probably publish this ...


The one thing you quickly learn about strategy is you never actually tell the outside world what your strategy really is. If you're up against someone who has skill in what they're doing then at least try to look incompetent even if you're not. Try to look weak where you are strong. So whilst your actual strategy maybe fluid and adaptive with changes in the environment, you should always portray an image of a meme copying clone unless for commercial reasons you need to expose something else.

Of course that does mean, you can never really tell if your competitor is incompetent just by looking at their strategy. That's the problem with figure 3 and why future attempts to distinguish strategic play will become increasingly more difficult. With greater levels of situational awareness and weak signalling then people will learn to disguise their patterns of behaviour. Many years ago it used to be possible to track the movement of private jets in order to determine if executives from different companies were meeting up (useful in tracking M&A talks). These days there's a lot more care taken. So be careful not to assume too much. As people get better at this, it'll become harder to tell those players from the chancers.

Incompetence, or at least the appearance of incompetence, is a necessity for good strategic play.
Posted by swardley at 12:29 pm