Something that will change the world of competition ...

One of the most powerful force multipliers in competition is the use of an ecosystem model known as ILC built around a utility service. This model has been in operation for about a decade and can be shown to create network effects in terms of innovation, efficiency, customer service and stability of revenue. There's nothing quite like it but since it's old hat, I won't go through it again.

However, the ILC model doesn't work quite so well in the product space (because the capture of consumption data requires expensive market research) nor in the physical commodity space (again there is no way of capturing consumption data).

This is all about to change.

Sensors are getting to the point of being industrialised to commodity components that will capture and centrally store data through a "Sensor as a Service". Future products, even physical commodities will contain multiple "Sensor as a Service" components. This provides the capability for ecosystem games like ILC to be played out in the physical world.

Supplier companies will start providing low cost commodity sensors with an attached Sensor as a Service capability as a highly industrialised platform. Other companies will deploy these components into their products, new inventions and hence an ecosystem will build around these Sensor as a Service. The benefit for the deploying companies is the sensors will be low cost and the Sensor as a Service will provide either data aggregation, market comparisons (performance compared to other sensors) or a range of other useful capabilities. Whilst useful for lowering cost of experimentation and product implementation for the deployer, the real beneficiary is the supplier.

The supplier can play the same trick that happens in the digital world of not interrogating what the sensor is doing (that'll be private to the company deploying it) but simply monitoring consumption through the Sensor as a Service to identify the spread of new successful innovations (whether genesis of a new act or a product differential). It's no different to the ILC model but now played out in the physical world and it will have the same impacts.

From figure 1 below - you industrialise a component activity representing a sensor (A2) to a more commodity form (A3) which is provided with a Sensor as a Service capability (e.g. data and / or code with some form of connection to a remote API). Other companies then build new inventions / feature differentiation (B1, C1, D1) on top of the Sensor (A3) because it is provided at very low cost and hence reduces their risk of experimentation. You then simply monitor consumption of the API to identify what changes have been successful and when identified you aim to commoditise any component (D2) to a future Sensor service and repeat the game - you get everyone else to Innovate, you Leverage the ecosystem to spot success, you Commoditise - ILC. 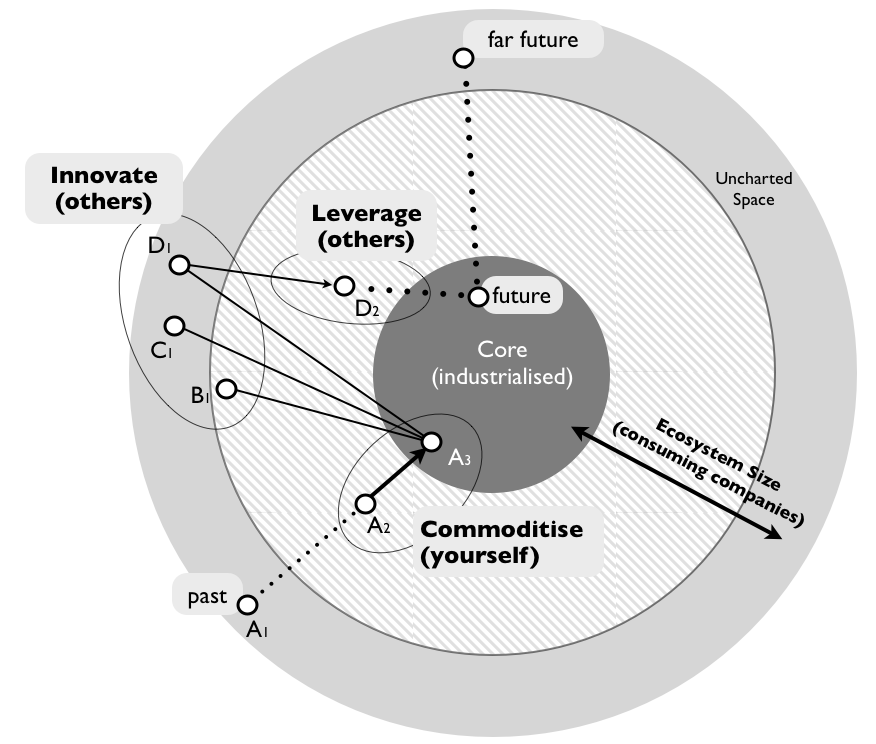 For example, let us suppose we were Amazon (they are very good at ecosystem games) and with big data becoming a rapidly industrialised component (already services like BigTable and EMR exist) and CCD being a fairly commodity component then let us hypothesise that we introduced a CCD Sensor as a Service. For makers of devices which include CCD, they would get low cost CCDs and a service telling them about the performance of their CCDs in the wild, maybe some other data aggregation capability (even to the point of customisation to location / time given environmental conditions). Of course, as the supplier, we would get to know what products (in which our sensors are deployed) are rapidly growing and being used regardless of who is making or selling them or the data being transferred. This is achieved by simply looking at consumption of the service, the actual sensor data being private to the deploying company. This is incredibly useful for the supplier and why ecosystems are powerful future sensing engines.

The net effect will be the same as the digital world. The supplier will start to simultaneously exhibit :-
There's a whole new world approaching where ecosystem games (from gaming theory to open source as weapon) can be re-applied in the physical world. Competition from physical engineering to healthcare is going to get seriously interesting. We've seen early starts in this space over the last couple of years but it is building. Key to success of course will be to position yourself as the supplier of commodity sensors with the Sensor as a Service attached i.e. you need to identify those sensors suitable for such a game, industrialise to components and start building the ecosystem of other companies building on top of it (see figure 2 for a rough simplification of the game). 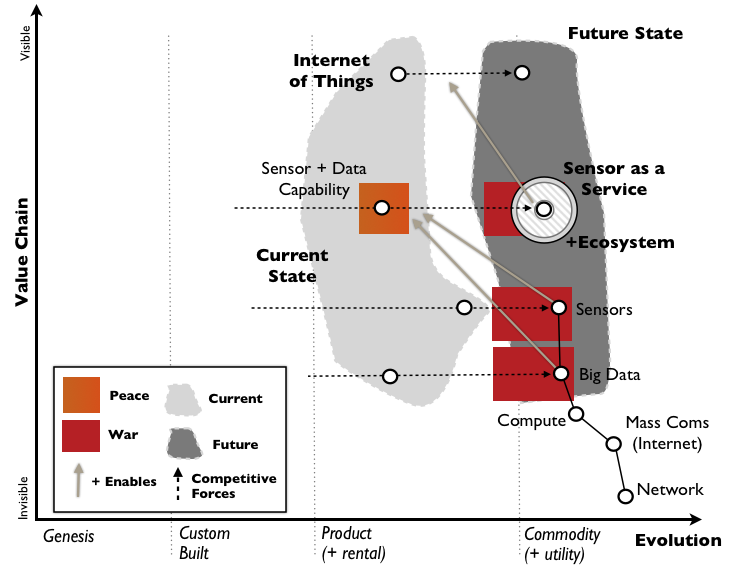 That's the really interesting thing about the Internet of Things. The real battle will be over the underlying components and ecosystems that are built around this. Sensors are sexy - well, if you're a competition nut like myself. You don't want to be the device manufacturer, you want to be the component sensor as a service in every other manufacturers device.

Oh, and the best news is ... most of the competitors in this space probably won't see this coming (poor situational awareness), they'll focus on the device and communication between devices whilst you can start to build up in underserved markets. When it finally hits then combined with inertia, this will be one of those predictable forms of disruption that any start-up can have a field day in. There's a few billion to hundred billion dollar companies to be made in this space.

How do I know this? Well, I don't - well not for definite. With another 7,200 days of data collection I could be more conclusive (or not) but alas that's another story. At the moment, I'd advise taking the above with a pinch of salt as with any other prognostication on the future unless you're a start-up in which case I'd say 'you become what you disrupt'.  It'll take 10-15 years before this space really kicks off, so it's time to start building now.

There's a lot of future value in sensors and sensor ecosystems.
Posted by swardley at 9:27 pm