This is not the data you're looking for ...

Many many years ago I was asked by a hedge fund whether they could use LinkedIn data and other social networks to see which companies were talking to each other with an eye for future acquisitions.

I responded "this is not the data you're looking for".

CEOs are unlikely to like other CEOs on social networks prior to an acquisition. However, CEOs like private jets and ownership of private jets and flight plans are public information. Hence you could simply map the movements of private jets around the US, look for disturbances in the patterns i.e. regular repeated events where CEOs (and other top execs) from different companies landed in roughly the same location, at roughly the same time, ideally where neither companies had HQs (people like to be sneaky, clandestine meetings etc).  The technique proved remarkably useful but these days many companies tend to take efforts to obscure ownership etc.

There are many powerful techniques for examining weak signals to change both at macro-economic level and individual actors (i.e. companies).  When I say many, I mean hundreds - a good competitive intelligence unit doesn't need to resort to the nefarious activities of Duplicity to really understand a competitor's play. This is also my favourite part of mapping - once you get good then mapping your competitors is essential to the most powerful forms of gameplay including using competitor's inertia against them, creating force multipliers through ecosystems etc.

As Sun Tzu once said, 'if you know your enemies and know yourself, you will not be imperiled in a hundred battles'. Understanding the landscape, your own capabilities and the opponent is essential to competition and given most companies barely understand the landscape then you don't need a great deal to take on a market. Correctly used, force multipliers of a x1000 are not uncommon i.e. if you're up against a company with a few billion then you only need a few million and the right play to take them down.

The point however I want to reiterate, is that in an era of 'big data' the most important things are the models of understanding and not the volume of data itself. Huge amounts of the wrong sorts of data doesn't normally get you anywhere. Of course, if you don't know what you're looking for (i.e. you have no model of understanding) then collect everything. Maybe you'll get lucky.

I'm not a big fan of luck however. I find when you have to start to rely on it (e.g. if you are competing and find yourself needing a lucky break, that next new innovation to succeed) then that's normally when it leaves you. It's normally a sign that your gameplay has sucked.

There are a lot of big companies in that boat at the moment who have failed to understand the landscape, the predictable forces of change and how to manipulate this. A lot of people talk about 'disruptive innovation' when they actually mean "we've been outplayed but just don't want to say this or know how to fix this".

We should see some huge name casualties in the next 6 years. We have many modern giants that mimic the position of Blockbuster, Atari, DEC and Kodak. But who are they? Well, those companies appear to occupy the bottom left hand corner of this graph. Alas, it'll take a few more years until I have the data to know whether this particular 'weak' signal and model is truly significant or not. 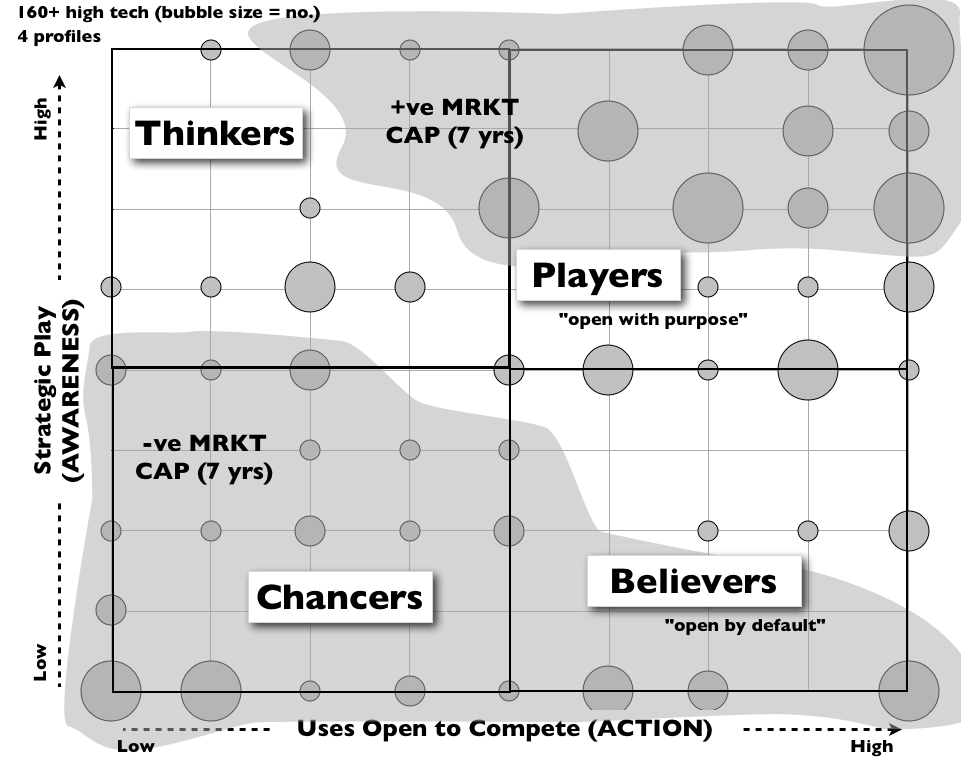 That's the problem with models of understanding, you have to build them and until you have developed models (with correlation, causation and experimental verification) that repeatedly work then you never really know what you're looking for.

It's like the CEO and jets example above. Until we tested it, we didn't really know whether it was relevant or not. Of course, when you find something that works repeatedly - that's where real value lies.

In all this data, those repeatable models are the ones you are looking for.