The wow of mapping

So far, I've covered then good bits of mapping - namely focus on user needs, coping with change, effective management of complex environments and contracts, better scenario planning and strategic gameplay, improvements in communication and risk management and the ability to identify opportunities from system level to policy - along with the Amazing aspects of mapping of better situational awareness (correlated with market cap growth) & organisational learning, initiation of potentially more effective organisational structures and heightened ability to anticipate change.

The above is a 'kick ass' list of business superpowers however it is nothing compared to what's next.

If you haven't read those two posts - STOP! Go read both of them - the good bits of mapping & the Amazing aspects of mapping - and then return.

The conclusions of this post are also the most controversial because the examples are rare in the extreme and data is very thin. However, if this concept is right then to give the 'wow' a title then it has to be :-

First, a bit of background. I noticed this effect first in 2004 when I implemented the first early prototype of a Pioneer, Settler and Town Planner structure in Fotango. Of course, back then I was experimenting without a clear understanding of why the new structure improved our efficiency and innovation so effectively. I do now, or at least I have a pretty good idea why.

To explain why, we need a little bit of a journey. First, when mapping a business you need to get people involved in the organisation to do the mapping and preferably large numbers of them. This is because one of the axis of evolution is certainty and it's actually difficult to precisely say where something is on such an axis. You can use the wisdom of the crowd effect (see Marquis de Condorcet) but this requires each voting member to be 'more likely than not to make a correct decision'. Hence it has to be people experienced in the business and the environment itself i.e. there's no general consultancy gig in mapping and if any consultant offers to map your business ... run away. Of course, you can get strategy advice once you've mapped but since most big strategy firms I've met tend to fail at getting the ten good point right ... run away. It's always way better to learn to play chess for yourself.

Now, once you've mapped a business you still have a problem ... bias. Having watched and collected maps from different companies, I've noticed a tendency of companies in similar industries to think in similar ways. This is a probably a side effect of competing against each other, people moving between companies in an industry and industry specific conferences.  Hence what is considered advanced modelling techniques in the oil and gas business is not the same as what is considered advanced modelling techniques in the high tech industry. Though I don't have enough data to categorically state this (yet), it would appear that not only do you have early adopters and laggards within industries but entire industries can be early adopters or laggards. However, within a laggard industry there will be companies that consider themselves to be early adopters because they're comparing to their competitors. A bias exists towards the industry norm.

Hence if you take mathematical modelling techniques, let us hypothesise that the rough order is high tech > media > retail > finance > pharma > oil and gas. Then not only will you have early adopters and laggards in each of those sectors but the sectors themselves will exhibit differences. Hence a company in the finance industry which considers itself a 'early adopter' might dismiss a high tech company moving into their industry but can often find themselves competing against a beast they're poorly equipped to deal with. The problem with this bias is that the delta between industry sectors may well be growing (this is part of a current research examination).

Now, putting bias aside for moment, I want to now turn to profile. If you take all the maps of a company, by simply counting frequency of components at different stages of evolution then you can generate a profile. At the moment this is a very imprecise and highly polluted technique (because of bias) but it gives us a 'flavour' to how a company views itself.

The interesting aspect of a profile, is that each section requires different management techniques and methods. It was an awareness of this that led me to the pioneer, settler and town planner structure (PST) in the first place. See figure 1. 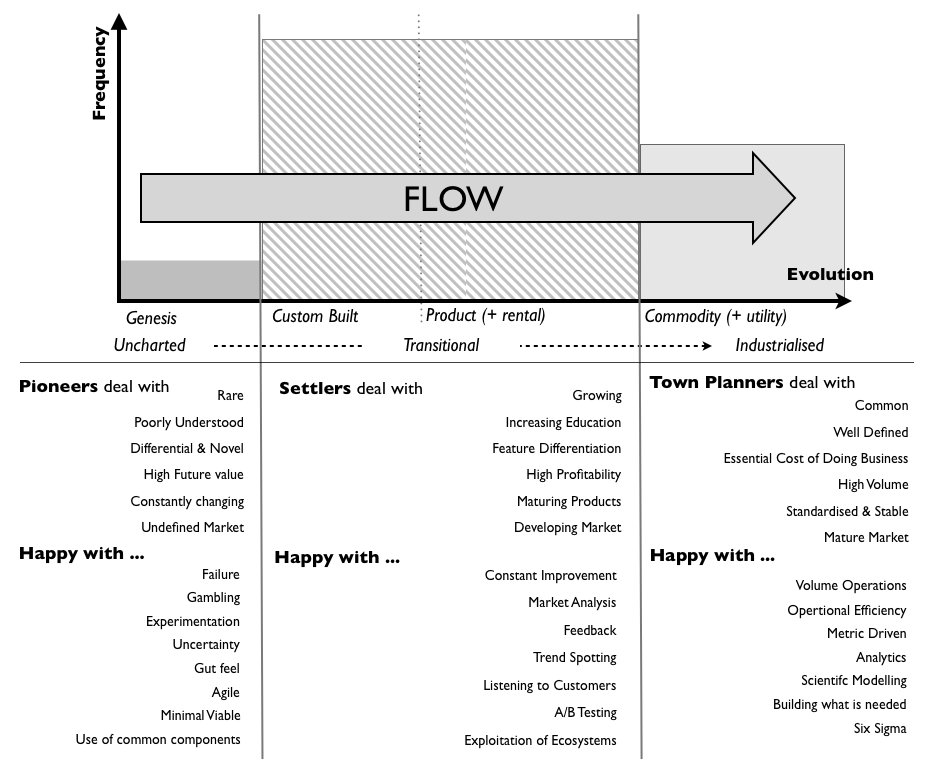 So rather than organising by 'type' of components grouped into functional departments (such as IT, Marketing, Finance & Operations), under a PST structure the company organises by 'evolution' and components flow from one group to another through a process of theft. For more details read here.

In the PST world there is no IT, Finance and Operations others than subset specialisms of PST. When implementing this structure, people appear to be attracted to different parts of the profile. I'm not going to say there are different characteristics of people but a tendency of people to be happier with certain parts of the profile. Also the cultures of each part are different - pioneers operate better in an environment which is different to town planners. Finally, each part of the profile is important for a company's current and future health.

Hence I was piqued by Lou Adler's post on there being 'only four types of jobs in the world' because in a PST world (based upon evolution) there are only three.  Oh and for reference the difference between Lou's post and the much earlier PST structure is the Pioneers are the builders, Settlers are the improvers, Town Planners are the producers and contrary to Lou's assertion, all three groups contain thinkers. I've seen more recent work (at Greenwich University) which seems to support this structure further.

However, this is not the key point. I happen to have created and experienced a PST structure and seen equivalents and whilst there isn't enough data to statistically prove it is vastly better beyond reasonable doubt, it is more inline with how things evolve and my experience tells me it is a vast improvement in terms of innovation and efficiency.

This is pretty much counter to everything which is written on organisational culture today. That's the big wow of mapping and if you're embarking on a mapping journey, this is where it will lead you. I know because I've been there.

Oh, and why wow? Because if the above is right, then there are far more effective organisational forms than what exists today. Companies like Amazon, Google, Facebook etc aren't the permanent titans that people make them out to be. They can be taken.

Oh, and what happened to Fotango? Well, as far I know it was a bunch of strategy consultants that persuaded the parent company the future was in 3D television and variants thereof rather then the stuff Fotango was doing in 2005 - namely 3D printing, mobile phones as camera, platform as a service, server side javascript, automation, continuous deployment, infrastructure as a service, nosql like object data stores, online visual scrapbooks ... oh, it was a depressingly long list.

I'm not a fan of big name strategy consultancy firms. In my world they take the 'kick' out of 'kick ass'.
Posted by swardley at 2:54 am