The evolution of any business activity is complicated by the existence of multiple ecosystems such as the enterprise and consumers. Activities can exist in, transfer between and commoditise within any of these ecosystem. 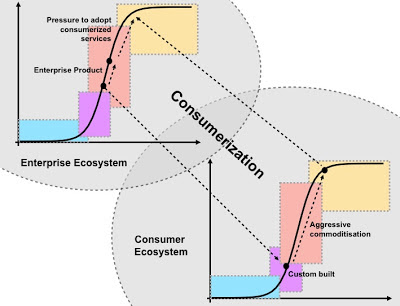 When discussing an activity, a key issue to consider is in which ecosystem the evolution of that activity is governed i.e. is it being driven by competition in the enterprise or the consumer space. Back in 2001, Douglas Neal and John Taylor described the process by which governance transfers from the enterprise to the consumer ecosystem as Consumerization.

The consumerization of technology and its subsequent commoditisation in that consumer ecosystem can have a profound effect on the operation of any enterprise using that technology. It should be noted:


Numerous activities have undergone this change. The pressure for adoption created through consumerisation has created positive responses such as BYOT (bring your own technology) and negative responses such as shadow IT i.e. when an organisation fails to deliver what its internal consumer need (Joe Baguley gave an excellent presentation on this topic).

All organizations should, as a matter of course, examine both their own and the consumer space for the growth of highly commoditised activities and consider the impacts of these and whether barriers to entry into their own industry will reduce.

For point of reference, computer utilities (i.e.Cloud computing) is expected to reduce the barriers of entry into many industries. In such cases an approach of adoption of the service and creation of higher-order systems can be used to re-establish those barriers.

Equally the impact of consumerization on the means of manufacture is going to hit a wide range of industries. This video is a foretaste of what is going to happen.