As we move from a world of infrastructure products to a competitive market of infrastructure services, private clouds have a valid role as part of a hybrid strategy in mitigating transitional risks (such as concerns over data governance, trust, transparency and security of supply).

The key word here is transitional i.e. this is not a permanent solution. Furthermore by using a hybrid strategy you're deliberately sacrificing some element of the benefits of public provision (economies of scale, focus etc) in order to mitigate those risks. It's a trade-off.

However, for this post I'll assume you've decided to make that trade-off. Hence you're going to be using a combination of public and private resources in a hybrid form for the immediate future. So dealing specifically with infrastructure, at what price should you be building a private cloud?

First, you need to recognise that a consequence of a shift to standardised components provided through utility services will be an explosion of innovation in higher order systems - i.e. the competitive landscape is going to become even more competitive. Second, cost efficiency won't result in reduced IT budgets because increased competition, the long tail of unmet demand and co-evolution effects will result in far greater consumption. Lastly, one of the key benefits of cloud is speed and when this is combined with cost efficiency, you'll end up doing more, faster with the same budget.

It's worth noting that there is little correlation between total IT spending and business value but there is strong correlation between speed and business value. How efficient your provision is in terms of speed is critical here. Now assuming you're not planning something daft like a long winded requisition process for new virtual machines, then the speed of provisioning will be minutes whether public or private. Assuming this is uniform, the distinguishing feature becomes cost efficiency - i.e. how much MORE you can do with same level of spending over competitors.

With public provision such as Amazon EC2, a small instance (I'll refer to this as a VM) costs currently $740 per year. Now whilst Amazon doesn't release figures, we believe the cost of provisioning such a VM can be much lower, possibly as low as $220 per VM per year though from the comments possibly much lower. Hence if your private cloud is being designed to cost $1500 per VM per year, you might be forgiven for thinking that this is only twice Amazon pricing and represent good value for a hybrid trade-off. What you're probably discounting is that your private environment will have to exist for three to five (in a worst case) years and during that time Amazon's pricing could fall rapidly, possibly to the order of $300 per VM per year, possibly lower.

In such circumstances, a competitor with a pure public play would have upto a 5x cost advantage (depending upon how much of your hybrid strategy was private provision) which is an astronomical difference in a world of increasing and more rapid competition. But that's a key point to note, the impact depends upon the type of industry you exist within and your competitor actions.

Assuming you're working in a high tech reliant industry, then in order to give your private cloud a fighting chance, you have to be designing for a target price of between $220-$540 per VM per year.
These figures (and lower) are achievable if done at reasonable scale and with a relentless focus on commodity provision. For reference purposes only, I've provided a hypothetical example (based upon real data from real examples) of a VM farm. I've used the following assumptions:
Given this, then figure 1 shows as a rough guide, how your target price per VM per year breaks down into its various components.

Figure 1 - Cost per VM per year.
(click on image for larger size) 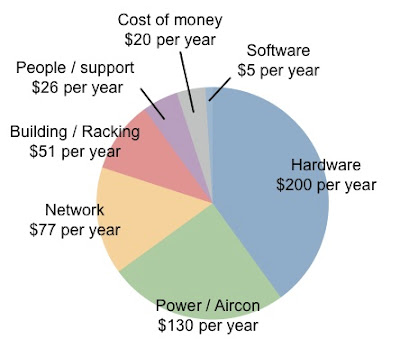 Now obviously there are many ways to skin a cat, and pricing is sensitive to various factors such as scale, density of VMs, power consumption, number of units per rack, location etc etc. However, I put this here to start a discussion as I would like to know what's your cost per VM in your private cloud?

It's 2015 and companies are still commissioning / building private clouds as new projects! Ouch. There's going to be some very costly white elephants.
Posted by swardley at 10:45 am