The first rule of brexit is “you’re wrong”.

No matter what you say on brexit then someone will argue that you’re wrong and that they’re right. So let us start by concluding that whatever map I’m going to produce on the subject is wrong which is ok because all maps are wrong anyway. The purpose of a map is never about being right but instead helping to create a better map. Hence, I’m going to start by saying that I accept that the maps are wrong but I’m not interested in why they are wrong, I am only interested in a better map. So, if you want to discuss this subject then produce a better map. Everything else I will consider a waste of time wrapped up in individual political capital, stories and desires. If you want to have a shouting match over some narrative then find a mirror and knock yourself out silly. Since the map is wrong, I’m going to assume the assumptions are wrong as well. It’s all wrong but that’s ok. The question is whether it can be useful.

In discussions with a group of people who voted Leave and Remain a couple of key words and phrases resonated. On the Leave side there was the idea of an elite (the few) versus the people (the many). This concept of “the many” was also replicated in the Remain discussion but through terms such as populist, appealing to populism and even a mob. Whilst variation existed in what those terms actually meant and who those groups were, the idea of a many and a few was fairly consistent. Hence, I will start with those as my main two users - the many and the few.

On the Leave side emphasis seems to placed on two key concepts - democracy and control. Both we couched in terms of the collective rather than the individual i.e. “our democracy” and “we are taking back control”. On the Remain side emphasis seems to be placed on belonging and freedom. This was often a mix of both individual and collective as in “We are European”, “We are part of Europe” (i.e. a sense of belonging to a wider collective) and “Benefits of freedom of movement” (i.e. how I or other individuals benefit from this). To a lesser extent this also occurred with discussions over wealth, as in the Leave side tending to more grandiose discussions of a “Global Britain” invoking a more collective slant whereas the remain side tended to discuss both the economic impact to them and issues of safety to the unfortunate - “Do I need to hoard food?”

Two other interesting ideas appeared early on in the discussion which were the idea of hierarchy and responsibility. Whilst hierarchy could often be well articulated and agreed upon, its associations seems to diverge. In almost all cases it was described in relationship to ideas of control but in some cases it was associated with belonging as in “a tribe needs a leader”. I tend to avoid the use of the word tribe finding faction a far more appropriate term, hence I will use faction in this description. However, what was highlighted was a distinction between meaning i.e. does an accepted meaning exist for the term) and association (the strength or weakness of associations between meanings. Hence we can agree on what hierarchy means but can disagree on what it is connected to i.e. belonging.

In contrast, and quite unexpectedly, the notion of responsibility exhibited differences in meaning. For some, when describing ideas such as “We need to pull together” what is meant by “together” is not the same. For some, together describes more of a collection of individual responsibilities i.e. in the melting pot of the market, the overall effect caused is through a collection of individuals acting. For others together describes a collective responsibility i.e. we as a group need to achieve something.

Of all the terms raised, notions of “safety” and the term “democracy” were particularly fascinating. Safety showed not only disagreement over specifics but people exhibited a reluctance to discuss the issue in the company of others with a different view. The reactions were often either quickly defensive, closing down the conversation, talking over each other, failure to listen or simply not engaging.  These reactions are the sorts of behaviours often seen when discussing in psychologically unsafe environments.  The notion of safety also had strong resonance with the Remain parts of the group in terms of membership of the EU with the benefits of "a larger trading block", dealing with defence and outside threats.

The idea of democracy had some peculiar divergence with general agreement on the term and ideas of fairness and equality but disagreement on what is fair with notions of the referendum being “cheated” or “stolen” or the Parliament "subverting the will of the people".

So, to begin with we have concepts of a few vs many, individual vs collective, democracy and control, belonging and freedom, wealth and safety, responsibility and hierarchy, safety and democracy. Many of the terms had disagreement over specifics or associations but convergence in terms of general meaning. From these discussions, we have enough components to create basic map using the axis of “ethical values” described in Part I.

I’ve used the ethical values axis simply because it appears more meaningful in this context. Hence we start with concepts, emerging meanings, converging meanings and things which are universally accepted and agreed upon. Remember, the terms are simply labels for the different stages of evolving capital. Where possible, I’ve also avoided adding in any principles (e.g. communication and challenge) or concepts of values in both society and local groups. I’ve also added in the term Agency as in the power and independence to influence one’s own environment as it was an idea that was often described with few being able to give meaning to that term. Lastly, remember that we will assume the map is wrong, the sample size is far too small but that’s ok as this is only a stepping stone to a better map (see figure 1). I've highlighted weak associations as dotted lines. 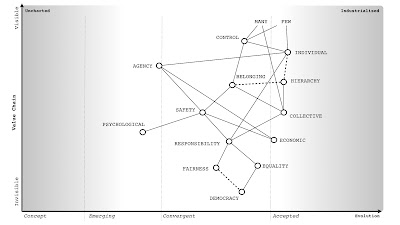 Let us use this map to describe some of the narratives that appeared to be in play. Do remember, that since I was the person recording and transcribing the interviews that I will have my own perspective and bias. Fortunately, that will be exposed in the map for you to challenge.

The Few
On one side, there are the few. The few wanted control for the individual (i.e. themselves) and by this we mean both the agency (the power) to act independently and control over others (a collective) through some form of hierarchy. The purpose of this agency was economic wealth, as in it both needs it and provides it and creates safety for that group. The sense of belonging here was more a tool for controlling a collective i.e. the few were the faction leaders and the sense of belonging (to the faction) was focused on controlling the collective. This narrative I’ve shown in figure 2 as red lines and text (which I've also made bold and increased the thickness). 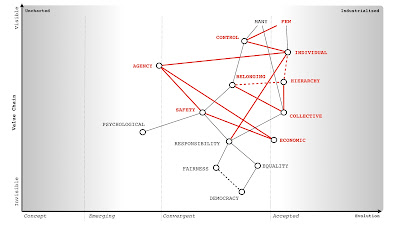 The Many
One the other side, there are the many. The narrative tended to again discuss control but in a sense of a collective that belongs together (as a faction) which is focused on creating safety for the entire group. This was wrapped in notions of collective responsibility with the “freedom to discuss and challenge” with each other. The notion of collective responsibility was also tied to concepts of democracy through both equality (the line of “one person, one vote”) and fairness (the glib “no taxation without representation” was stated). This narrative I’ve shown in figure 3 as green lines and text (which I've also made bold and increased the thickness). 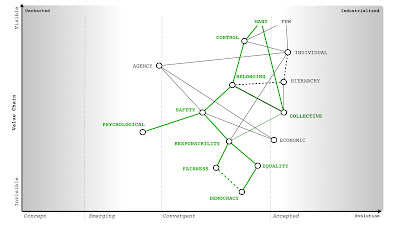 Commonality
Now let us overlap these narratives - see figure 4. Whilst there maybe disagreement on the meanings and the associations between terms, common core ideas appear in both narratives - that of control, of belonging, of collective and of safety.  I've highlighted in blue and made those terms bold. There are also clear distinctions, in one narrative responsibility is to the individual and safety is strongly connected to economic wealth, in another the responsibility is to the collective and safety is more to do with engagement, being part of the faction. What we are slowly starting to visualise is the description (these are only narratives) of two distinct cultures with overlapping and common components. 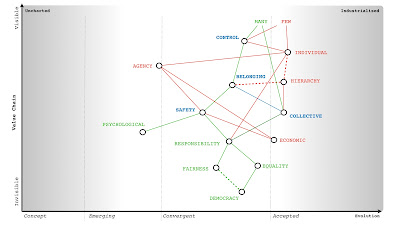 Why does this matter?
If we can visualise the landscape then we can start to learn patterns and determine ways of manipulating this environment to our favour. For example, we might wish to educate to create a common understanding of some idea or we may wish to emphasis or create new associations. From the narrative of the few then a key component is economic wealth however from the narrative of the many then the focus appears to be on safety within the group. Hence I might wish to establish an association between the collective and economic wealth and I can do this through a sense of belonging i.e. “Make America Great Again” or “A Global and Prosperous Britain”. What I am emphasising is the importance of economic wealth to the collective. My intentions might be to diminish collective responsibility and emphasise individual responsibility over time hence reinforcing my advantage but I cannot start with that message (see figure 5). 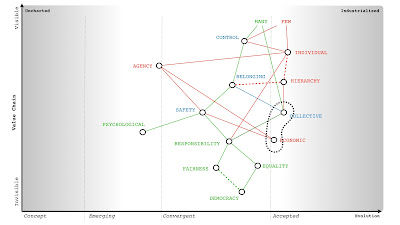 The point of the map is not that it is right but that we can discuss these issues, identify common components and start to learn how to change the landscape to our favour. We can start to add these components to our future map of culture, combining these elements with communication and challenge but before we do this we need to explore further including the areas of values, symbols, rituals and embedded knowledge.

Oh, and if you're looking for the answer to brexit then I'm afraid you'll have to look elsewhere. I'm much more interested in the mechanics of culture and populations.