I often talk about the use of an open play as weapon, a mechanism of changing the environment you exist in. Back in 2011, when I examined the phenotypic changes of companies (due to a particular cycle known as peace, war and wonder - more details here) there was a pronounced change in attitude in the next generation of companies from the use of open means for simply cost reduction to the provision of open means (source, APIs, data) to manipulate the market (see table 1).

Table 1 - Changes of phenotype from traditional to next generation. 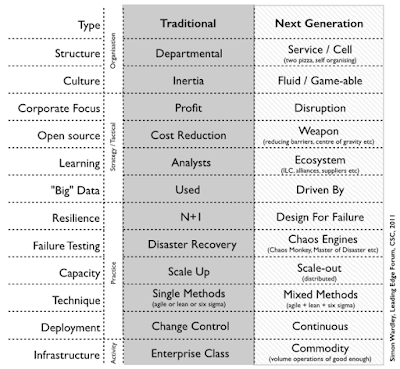 In the following year, I examined the level of strategic play (based upon situational awareness) versus the use of open means to change a market and noticed a startling effect. Those who showed high levels of situational awareness and used open approaches to change a market showed positive market cap changes over a seven year period (see figure 1). 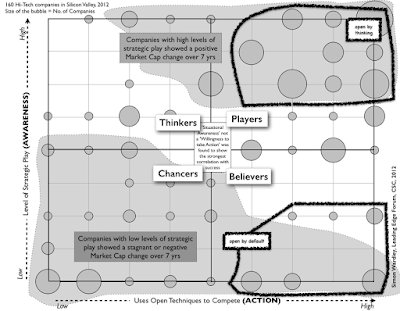 I've talked extensively about the use of Wardley mapping and how you can use this to identify where you might attack a market. I've also provided examples such as "Fool's mate" which is one of about 70+ different forms of repeatable gameplay that can be applied to a given context. In Fool's mate, you attack the underlying system with an open approach in order to gain a change in a higher order system. More details are provided here but figure 2 provides an outline. 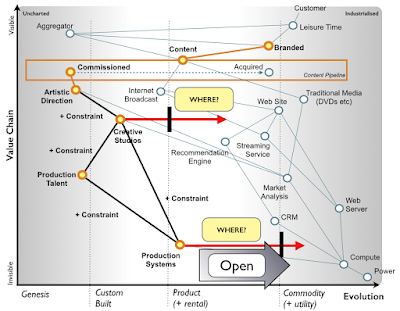 However, even if you do have reasonably high levels of situational awareness, you understand where to attack and how to manipulate a market through open approaches then this is not the end of the story. The use of open approaches is not a fire and forget system. You can't just declare this thing as "open" or create an "open consortium" and walk away.

Unfortunately, far too often in corporations I've seen people believe that "open" is synonymous with "free resources" and that somehow by opening up a system that the community will be so grateful for the gift that they'll just adopt it and success is assured. This is la la fantasy land. The majority of today's great tech corporations owe their success to the open source community, they are built on it and they do themselves no favours to disrespect the community in such a way.

If you decide to attack a market and you decide to use open as the means of changing it (what I like to call "open by thinking") then when you launch you'll going to have to put time, effort, money, resources and skill into making it happen. Hence the importance of "open by thinking" because going open should be seen as an investment decision which can pay handsomely if done right. There are numerous pitfalls to be avoid e.g. antagonising or not building a community, not listening to a community, not acting as a benevolent dictator for that community or failing to put its interests over your own, failing to steer a clear direction, failing to invest and worst of all establishing a collective prisoner dilemma.

You are the custodian, the gardener, the benevolent dictator of the community you hope to create. The act of throwing some code over the wall, creating an open source consortium and running a social media campaign on how "good" you are is a long way off from what you need to be doing. It is more akin to the self aggrandising but absentee landlord who claims the lack of tenants for their unsafe flats is purely because people renting properties are ungrateful.

Yes, you can use open approaches as a weapon to change the market in the battle between companies but it's a weapon that requires skill, dedication, investment and care.

BTW, I do love Chapter 12 - How to tell if a FLOSS [e.g. open source] project is doomed to FAIL. Hat tip to Jan Wildeboer for that one.
Posted by swardley at 12:49 pm