The probable problem with Watson

I like IBM Watson. It seems likely to be a roaring success. But there is a future problem in my opinion.

The issue with such 'reasoning' and interpretive capabilities (unlike machine learning through patterns) is that they are relatively novel and we're still in a mode of discovery. During this time Watson will grow, it will become more refined and IBM will build a successful product and rental business. [Though successful, we shouldn't forget that it is unlikely to replace what IBM is going to lose. It'll still be a shadow of its former self but thriving nevertheless]

However, the trouble really begins around 2030 (see figure 1) when such 'intelligent' agents will be on the cusp of industrialisation (the 'war' phase of economic change, the shift from product to commodity). New entrants not encumbered by an existing business will launch a range of highly industrialised services (most likely Amazon - and yes, I see no reason why they won't be around by then, bigger than ever). In the following 10-15 years the previous players all encumbered by existing and successful businesses will be taken out of the game unless they adapt. 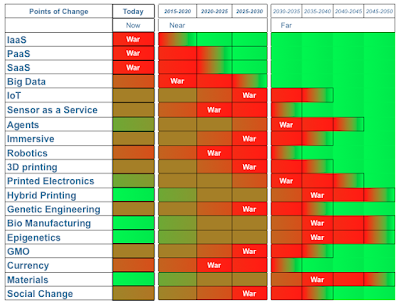 This pattern (known as the peace, war and wonder cycle) occurs relentlessly throughout history. Those who develop and build the field rarely reap the rewards of industrialisation. IBM is no different. As has happened to it in the past, IBM tends to develop the field, grow a successful business and then is forced to reinvent itself.

The timeframe today for this process (which is affected by commoditisation of means of communication) is currently around 20-30 years from genesis to point of industrialisation (the onset of war) and 10-15 years for the previous industry to be taken down.

To counter this pattern then you need to have enough situational awareness that you can industrialise yourself before your opponents do. There are two forms of disruption and this type can be anticipated through awareness and weak signals. However such awareness which is created through the use of maps and weak signal detection is rare and normally confined to Government circles.

Mapping of economic landscapes is itself on a journey and is only ten years down the path. It'll be another 10-20 years before maps get to the point of industrialisation in which case businesses built around sharing maps, use of industry maps and changes to the whole field of strategic play may well occur. Those too will take a further 10-15 years to develop.

Unfortunately, at the point IBM will need to industrialise Watson then it will have many of the 16 different forms of inertia to change (including pre-existing business) but in all likelihood it'll lack the situational awareness needed to know when to industrialise. The odds don't appear in its favour here. Watson might have given it a lifeline though not much of one but even that small comfort will disappear.

If you want a timeline then .... well there isn't one. The future depends upon actors actions, it's an uncertainty barrier we can't see through and you can't pre-determine action but instead only look at possible scenarios. For example, the entire timeline can be significantly accelerated by companies open sourcing technology in this space.

IBM by 2025 should be a very different beast due to the changes in cloud. It'll be a shadow of its former might in infrastructure but still significant in terms of specific application services (e.g. healthcare) and the platform arena of cloud (e.g. Bluemix Cloud Foundry). The idea that IBM built hardware will become a fading memory. The building of an ecosystem around Watson will help it to grow and evolve enabling IBM to create a successful product and rental business in this space. This is why I've said that you shouldn't count them out. However the problem with IBM is its constant reinvention. It's a great company but it fails to learn the game and tends to get industrialised out of a space. It might like to view this as exiting a commoditising space but those commoditising spaces (e.g. cloud) can and do provide huge ecosystem advantages.
The industrialisation of the intelligent agent space will kick in (around 2030), started by a player like Amazon. In the first instance IBM will dismiss the new approaches. By 8-10 years (2040) then the new player services will be less than 3% of the market. By 2045, they will be 50%+. The game will be over.

Watson will have created new glory but it will now be in decline as industrialised forms take over. Watson is also likely to have sapped strength from the platform effort whilst building inertia to its own industrialisation. IBM will be facing a new crisis of reinvention against much larger and much deadlier foes. It won't be the case of the giant IBM being taken on and losing to the minnow of Amazon ($125 Bn vs $15 Bn, as it was in 2006) but instead the minnow of IBM losing a core revenue stream to the giant of Amazon.

Of course, the future depends upon actors actions and it doesn't have to be like this. The timings (based upon weak signals) assumes a current 20-30 year cycle from genesis to industrialisation. VR started in 1968. 3D printing started in 1967. These things take longer than most suspect. However, this is an average. You can prepare for the change but you'd have to monitor those weak signals to get your timing right. There are also many other paths, many assumptions that need to be prepared for. [Examples include - What if Cloud Foundry fails? What if Amazon takes the platform space as well? What if not only ML (machine learning) but general purpose AI is greatly accelerated? All of this should be considered].

In another scenario, IBM could play this game to its favour but to do so it would need to capture those industrialised spaces and play fragmentation games against competitors. It will need to exploit constraints and the platform play has to be at the heart of this. To achieve this, it should already be working on how to industrialise Watson into a commodity service. This is more than just providing a rental service but looking at how to use Watson to create that industrialised future. It should be building upon competitors services and using this to cut them out of data flows and diminish their ability to sense the future. This a tough road to travel because success with products and rental services will constantly provide data against making such a move.

So which way will it go?

Alas, the incentive just isn't there for long term play with most commercial companies. Many of us will retire and some of us will have died through old age before this game plays out. However, if we could travel in time then I'd suspect we will see a new group of IBM execs facing a future of reinventing IBM as another pillar gets taken away. Of course, every now and then, you get someone who can play the game to its advantage - a Jeff Bezos, a Tim Cook etc. Every now and then, even companies get lucky.

However, the one thing I've learned after 25 years in business is that companies are singularly bad at long term gameplay and constantly get taken out by changes that can be anticipated and defended against. The only thing I know of which is worse than long term company gameplay is my ability to bet correctly on individual actors' actions.