If Wardley mapping is so powerful ...

For over a decade I've used mapping to startling effect having outwitted much greater foes and reduced waste in existing environments. From many hundreds of millions in new opportunities, cost savings and raised funds. For those few who use mapping in earnest, the smorgasbord of management doctrine feels outdated and current popular tools simple artefacts of a deeper process. Lessons such as the use of multiple management methods become ingrained, tactical gameplay around ecosystems becomes second nature and strategy takes on a new meaning. There is no turning back when you start mapping.

To contrast today's thinking with mapping then I'll return to the battle of Thermopylae (the tale of the three hundred) and the clash between the Greeks and the mighty army of Xerxes.  The great general Themistocles devised a strategy where the narrow pass of Thermopylae would be used to hold back the Persians whilst the Athenian navy would block the straits of Artemisium (see figure 1). 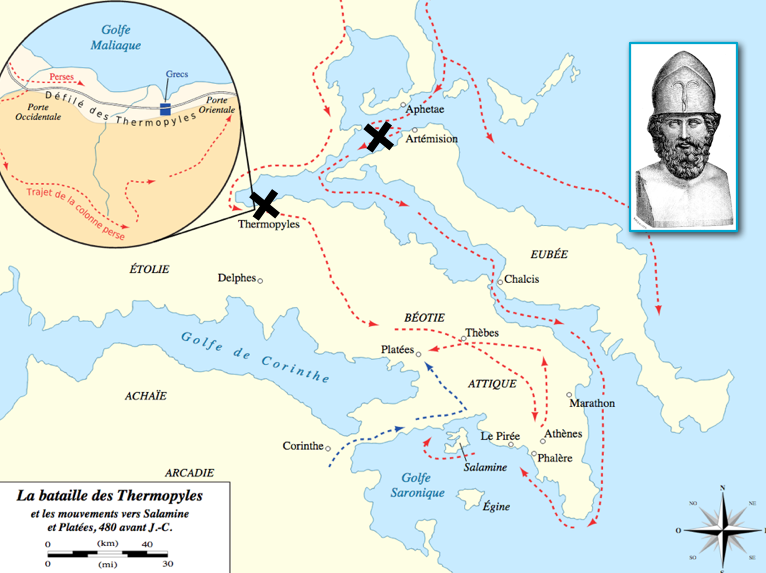 Now, imagine a universe where Themistocles had no situational awareness e.g. no map and no understanding of the landscape. Imagine on the eve of battle, if the troops had been called together and Themistocles had tried to rally them with a strategy not based upon the environment and context of battle but instead based upon the presentation of a SWOT diagram (see figure 2). 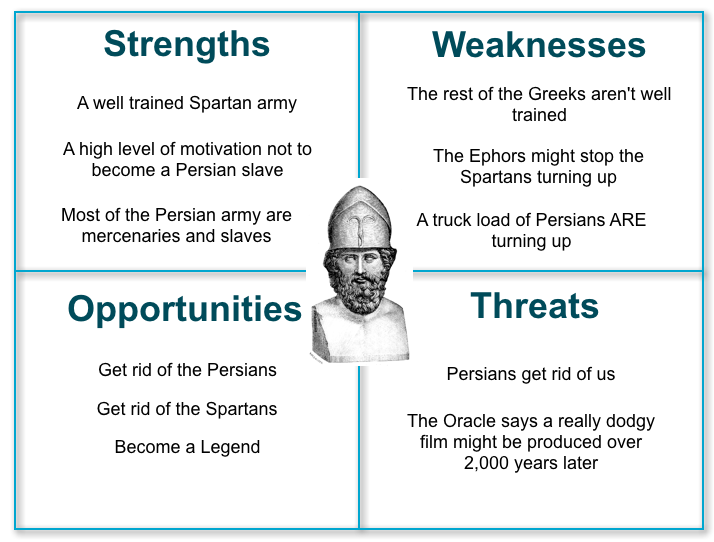 Now compare the two figures. What is more useful in battle - a map or a SWOT diagram? Now ask yourself, what do you more commonly see in business?

Had it been the normal practice to base a strategy upon a SWOT as opposed to situational awareness then I doubt we would have ever got the legend of the three hundred, the Greeks would have lost to the Persians and things would be very different today. On the bright side we might have avoided a very dodgy Hollywood film. Fortunately, Themistocles was well versed in situational awareness.

To be honest, I find teaching situational awareness hard in business because few CxOs have a military background and understand its importance. The best text on business is still a 2,200+ year old manuscript (the Art of Warfare) which very few understand. However, 'Wardley mapping' - as it has been nicknamed - continues to show its usefulness and is slowly gaining traction.

For those wanting to know how to map - the key is to start (imperfect maps are better than none) and a simple step guide is provided. I occasionally hear strategy consultants tell me that they do something similar, well let us be clear - that appears to be prattle. In a decade I've seen no evidence of any kind whatsoever of a similar technique. Fortunately the technique is all creative commons, so have a go yourself. You don't need strategy consultants, they are generally a waste of time and money giving you little more than copying others.

Which leads me to the question of why don't more companies use it? Well, the technique might be ineffective and the observed benefits just simply coincidence. There are many examples of positive use and whilst it seems unlikely that this is just fortuitous chance it cannot be discounted. However, more likely is that change in management practice is extremely slow. Given this assumption then it'll take 15 to 20 years before mapping makes any kind of dent (assuming it continues to demonstrate positive effects and isn't superseded by something else). That's just the way things are.

However, there's another problem. Take a look a figure 1 and figure 2 again. When using a map Themistocles could have decided to defend around Athens or Thebes or any number of 'wheres'. The why was a question of why here over there. In the end, a strategy was devised to take advantage of the landscape and to funnel the overwhelming forces of Xerses into the hot gates. This process of strategy is inherently more complex than a 2 x 2 matrix. It's more reactive, requires greater understanding and flexibility. The 'Keep it Simple Stupid' mantra would argue for the use of a SWOT and abandoning any form of mapping.

I suspect that this complexity will be the real problem with maps and why adoption will take a very long time (more like 30 years) regardless of benefits. It's the same issue behind our love affair of single size approaches - outsource vs insource, push vs pull, agile vs six sigma, or hierarchical vs network. We like simple.

Maps, like life, are by nature more complex than our desire for simple answers.

Historically, approaches which change our way of thinking and shift us from a simple view of life - whether Boyd's OODA loops (1973), Business Relationship Management (Ernst & Young, mid 1990s), Cynefin (Snowden, 1999) or Scrum (Takeuchi et al, 1986) - take a long time to spread. Mapping has a long and slow road ahead of it in which (despite its apparent usefulness) it will have to stand the test and rigours of time. I am under no illusions regarding this.

However, on a positive note then this also has a considerable upside. Uncommon use will mean that mapping will retain for many years any ability it might have to create a significant competitive advantage over others. I still expect in a decade's time to be able to understand and map an industry, then play the game and take over an entire market with a fraction of resources of competitors. I still expect to be playing chess against competitors who can't see the board well into old age. I expect by then, I'll be an even better chess player.

I'm ten years into this journey but as Lao Tzu would say "a journey of a thousand miles begins with a single step". There's a long long road ahead but it looks like a pleasant journey.
Posted by swardley at 10:36 am