I often see the same mistakes being repeated by companies when a core component of their value chain is under attack.  I've come to understand that the cause of this is more than simple inertia (given the timespans involved, the ease of defence and predictability of change) but instead blindness to the game that is occurring.

I thought it would be worth writing down a couple of typical epic fails (there's a long list) that companies undertake. I'll ignore the 'do nothing' scenario as I'm more interested in the poor moves that are made rather than inability to make a move.  I'll start by outlining a scenario.

I'd like you to put yourself in the position of a CEO of a company that produces a product. Let us take it as a given that you have inertia to change (due to existing business models and practices) and that you are unaware of how things evolve and co-evolve - i.e. no cheating, you're not even aware that you can map an environment.

Your product represents an activity which is widespread and well defined in the market and a new entrant (not encumbered by existing models and practices) has started to provide a utility form. Apparently the competitor started work on this idea about 8 years ago, they launched 5 years ago and they represent less than 1.5% of the market today but are rapidly growing. According to financial reports they have doubled in size each year for the last two years.

The competitor is also building an ecosystem of companies that consume their new utility services and they're extremely aggressively priced. You're noticing some price pressure as companies are adopting these new competitor services.

Your company is currently competing with the competitor in an advanced economy, there are however many emerging economies with technology that is far less mature than your product. You've called together some of your executives to discuss the issue.

Recommendation 1) Your VP of Biz Dev explains that the emerging markets represent future growth opportunities and recommends we extend to include these markets.

Recommendation 2) Your VP of Product Development explains that some customers are dissatisfied with the cost of our product especially when compared to the new utility services. They recommend we should invest in innovation and creating a functional differentiation between our product and the utility services.

Recommendation 3) Your CFO notes that the competitor is far more aggressively priced and recommends we undertake a cost cutting exercise reducing head count, operational and administration costs. They've calculated that with an aggressive programme we can reduce our selling price to match our competitor whilst maintaining a strong margin.

Recommendation 4) Your VP of marketing recommends we should differentiate on customer service and customisation as the competitor is operating a volume operations like business but many of our customer's have highlighted that it doesn't meet their specific needs.

So which of the above do you pick to examine further?

There are a number of critical pieces of information missing from the above but given general economic forces we can pretty much make a stab at some of them. The first, and most, important piece of data we need is the doubling rate of the competitor because this will give you an idea of how long you have to react.

Whilst 1.5% of the market doesn't sound much, the changes from product to utility often represent a punctuated equilibrium (a period of rapid change) and hence doubling rates of one year are not uncommon. This means that whilst they're only 1.5% of the market today, they'll be around 40-50% of the market in five years time. This, combined with the evolution to utility has all sorts of catastrophic effects because our time to react is short.

If we take a year to make a decision to compete followed by a year to build the team and two years to build an equivalent service (the same three year time span the competitor spent building their's) then when we hit the market, we're going to be a start-up in a market dominated by one experienced provider (a decade+ experience) who represents 50% of the market. We're going to have collapsing revenue from our product based industry which will be heading towards niche and inertia to the change due to our past success. Adding on top of this, as these changes from product to utility usually involve co-evolution of practice then we (along with everyone else in the industry) will be scrambling to find new skill sets which will be in high demand. If the doubling rate is annual (which the above scenario suggests) then it's probably too late for us already and we need to be looking at either acquiring the competitor or exiting the industry.

Now, with the above recommendations there are a number of issues which I'll deal with in turn.

Recommendation 1) Epic Fail : The problem with extending into emerging markets is we're not dealing with the fundamental shift from product to utility. Hence, all we're likely to be doing is laying the groundwork for the competitor to chew up the emerging market once they've finished with the more advanced economy. This is not a good move.

Recommendation 2) Epic Fail :  The problem with trying to innovate your way out of such a battle is that the creation of the novel and new is highly uncertain by nature and it's far too easy for the competitor to play a tower and moat game i.e. for them to copy any successful differential we create. The effect of the tower and moat play is that whilst they continue to build up and strengthen their 'future' position then our efforts are just enhancing this. When we finally make the plunge into the 'future' market then we're likely to have been delayed because of our efforts to differentiate (not good if the doubling rate is fast) and the competitor will have built a tower of revenue surrounded by a moat devoid of differential opportunity. This is pretty much a disaster.

Recommendation 3) Epic Fail : Whilst cost cutting can be useful, when you use it to attempt to recreate the past then it's likely to cause a death spiral. The past is going, you need to accept this. Unfortunately, unless you understand the competitor value chain then you're unlikely to know if they have constraints which limit their price reductions (e.g. Amazon EC2 and building data centres) and hence they may have the potential for significant future prices reductions. Cost cutting for the reasons of attempting to re-establish past models is probably the most epic fail move I see companies undertake.

Recommendation 4) Epic Fail : The danger here is twofold. First there is the existing consumers inertia to change which is often represented by a desire to maintain the existing model rather than to adapt. The problem is that as their competitors adapt, the pressure on them mounts to adapt and though they tell you they want the past, they often end up buying the future. The second problem is our competitor's use of ecosystem. If they're using an ILC like model then their rate of apparent innovation, efficiency and customer focus will all increase with the size of their ecosystem. Competing against this with traditional approaches is pretty much doomed to failure.

There are ways you can outmanoeuvre this new entrant and all sorts of counter plays that can be deployed but then 'how to do this' is not the purpose of this post. What I simply want to demonstrate is strategic play is complex and apparently sensible recommendations (focus on emerging market, innovation, cost reduction, customers) often turn out to be epic fails especially when a company has poor situational awareness.

Competition between companies is like playing a game of chess and the first rule of chess is - look at the board.

---- additional notes (for the mapping crowd)

For those of you who like to cheat (like me), here's a mapping view of the environment - see figure 1. In the diagram :- 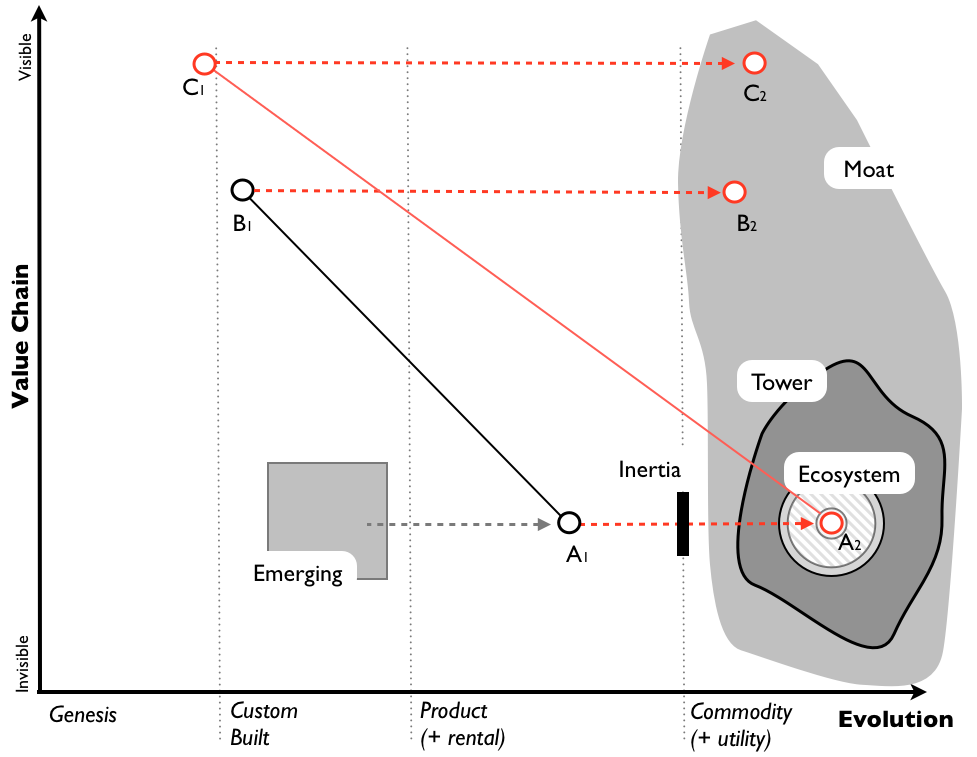