What we can demonstrate


1) Companies consists of many value chains comprising of components (activities, practices and data) that evolve due to competition.

3) As those components evolve we develop inertia to change.

4) The interplay of inertia and competition creates three economic states for any component - peace, war and wonder.

5) When those components have a broad effect (i.e. are part of many value chains) then those changes are seen at a macro economic scale. We call these ages or more appropriately Kondratiev waves.

6) Every age begins with commoditisation of a pre-existing act, disruption of past industries stuck behind inertia barriers (the causalities of war), co-evolution of practice (leading to new forms of organisation), an explosion in higher order and novel systems (the wonder),  reduction of barriers to entry and rapid increases in unmodelled data.

7) After a period of re-organisation which occurs during the war and wonder stages then the effected industries settles down and the novel activities created mature. Past practices and companies unable to adapt die off.

This is how, back in 2005, we knew that cloud computing (commoditisation of a range of IT acts) would lead to explosion in higher order systems, co-evolution of practice (devops), rapid increases in unmodelled data (Big Data), new forms of organisation (next generation), reduction of barriers to entry and disruption of past industries unable to adapt.

This is nothing more than a repetition of every cycle that we've been through countless times before ... and guess what, commoditisation of manufacturing through 3D printing will have exactly the same effects. Figure 1 gives a simplified overview of that repeating cycle. 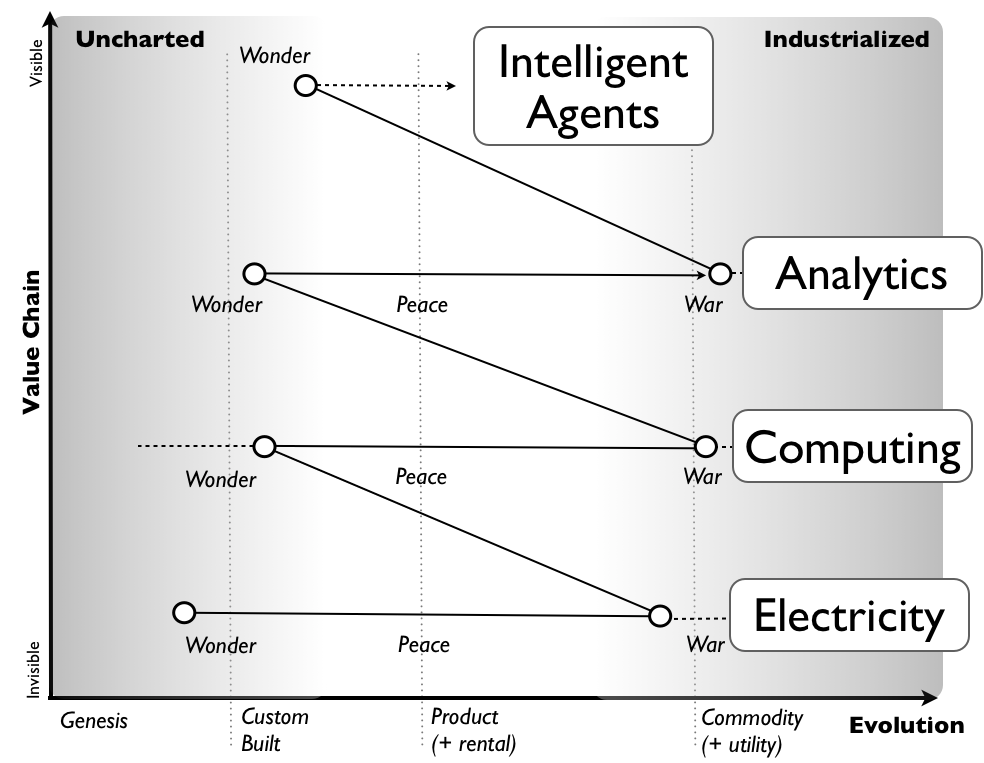 Now, sometimes a means for communication becomes more of a commodity (postage stamp, phone, internet etc) and as a result the entire process of evolution speeds up. It's not that we've become more innovative but instead the speed at which something genuinely novel becomes a commodity has accelerated.

Ok, so what's wrong with the 'Age of Disruption'.

It's also worth remembering that the reason why companies are being disrupted is not because of some unexpected change. This form of disruption is highly predictable and preventable. Alas, those companies being disrupted on the most part share one common characteristics - very poor strategic play.


Whilst culture is important all the time, Strategic gameplay appears more important in specific states of the economic cycle. IT is in one of those states when it matters, the state of war.

However, we're already entering the state of wonder, those past players will be cleared out and a new dominant form of organisation (as per Fordism in Electricity Age, American System in Mechanical Age) will emerge. This new form, which we call the next generation have the following characteristics (see figure 3). 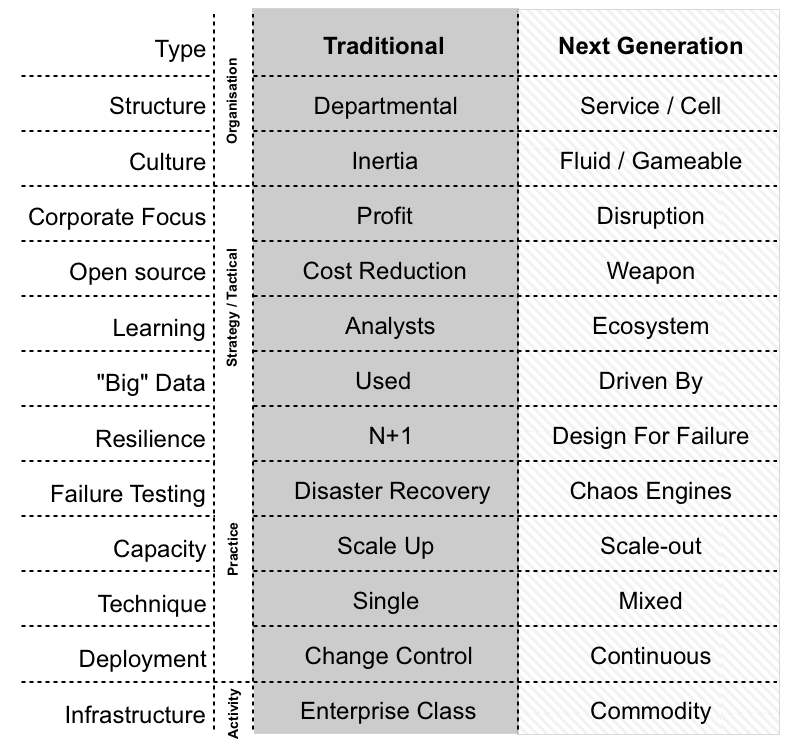 The first problem with the 'Age of Disruption' is it implies something new. It isn't. It's just a repetition of what has happened before governed by exactly the same mechanics (competition, evolution and inertia) with the same results. So, please take the effort to make it clear that this is not unusual.

The second problem is that this type of disruption is predictable. When we talk of disruption as in product vs product substitution then that's hard to predict and the interaction of culture and inertia becomes critical for survival for a company. In this case, because the change is predictable then the issue of culture and inertia are solvable well in advance and strategic gameplay is what matters most.

The fundamental reason why companies WILL be disrupted by this predictable change is not because of culture and inertia (i.e. we need to be more like a Silicon Valley company won't help you) but instead because you've got a bad case of poor strategic play.

So, if you wan't to call it an age (which it really isn't) then a more accurate title might be the 'Age with quite a number of out of their depth CEOs driving companies needlessly to disruption'. Now, obviously this isn't going to be a popular title and so I'm sure the 'Age of Disruption' will stick and numerous other factors (culture, inertia, unexpected change, customers) will be blamed as the principle cause of failure.

However, just remember that this 'Age of Disruption' is a repeating phenomenon throughout history and don't confuse it with the type of unpredictable product vs product disruption (such as the different format hard drives that Christensen talked about).