Tl;dr whilst culture often matters more than strategic gameplay, this isn't true in all circumstances.

I often hear the line that culture eats strategy for breakfast but do we really know this? What we do know is that activities evolve through a common path from genesis to custom built examples to products with rental services and onto commodity with utility services. What we also know is the style of competition changes (from wonder to peace to war) as things evolve and that companies have inertia to change due to many factors from past success to changing practices to changes in capital (physical, financial, social and knowledge).

Now when faced with change, to use the concepts of John Boyd, we first have to observe and orient around the change then make a decision and act upon it. The former is about situational awareness, the latter is about culture. But herein lies a problem because not all change is the same.

From figure 1, the genesis of an act is uncertain as by its very nature it is novel and new. The best we can hope to say is not what will be created but when something novel might appear as a result of componentisation effects (i.e. utility provision of computing is likely to create an explosion of new activities which consume computing). Product to product substitution is also uncertain caused by a change in the value network - we have no way of knowing that the iPhone was going to be a success. But evolution of an activity is not uncertain i.e. the shift from product to utility is known. It will happen, and our only issue is when and this can be determined by looking for weak signals (suitability, technology exists, concept exists, willingness of customers to adapt).

Figure 1 - Changes of predictability with evolution 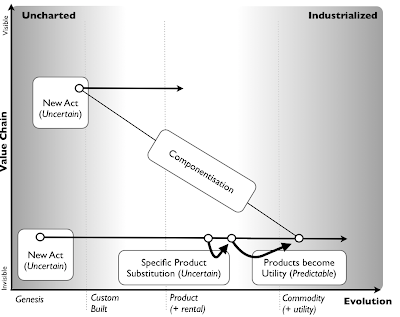 When faced with a product to product substitution then cultural aspects tend to dominate over situational awareness as an indicator of whether a company can take advantage of the change or even survive. Situational awareness doesn't help us because the reasons for the change (i.e. a delta in the value network) are uncertain and unpredictable. Those companies at threat of disruption by such a substitution will have inertia due to past success and unfortunately for them this is only reinforced by the uncertain nature of the change with concerns over cannibalisation and disintermediation of existing models. Hence they will often react late due to inertia or even deny the change is occurring and when they finally accept it, they need to adapt fast. The ability to decide and act in response to such a change in a short period of time depends upon their culture which in many cases resists the change. Doom awaits for those whose culture cannot respond.

Examples of this include Nokida and RIM and whilst many mis-steps were made such as not co-opting Android, ultimately they didn't know what was going to happen. Whilst their respective CEOs have been lambasted in the popular press, the disruption was difficult to predict and hence protect against. Culture was the key defence mechanism here in order to react and no amount of situational awareness or chess playing would prevent them being in this position. They were caught out by an uncertain change they couldn't respond to. Alas, that happens.

However, not all change is uncertain and unpredictable. For example, the cloud space which represents a shift from product to utility is highly predictable and we've even had have forty years prior notice that this would happen. In this case, situational awareness of a predictable change is critical to prevent a company continuing to build the wrong things. Inertia to change naturally exists but there is plenty of time to overcome this. Disruption should not happen because of the predictable nature. However as many former giants in the hardware world are finding out, disruption still occurs. But Why?

Well, the reason for disruption is spelt out in figure 2. The cause is not cultural but purely down to poor situational awareness.  In this case, those CEOs whose primary job was to see the highly visible storm heading their way and move the company out of its path were snoozing at the wheel. These companies will fail because their CEOs couldn't see the predictable storm, they had atrocious situational awareness and were basically playing a game of chess by not looking at the board. You can't blame their company's culture for that failing. 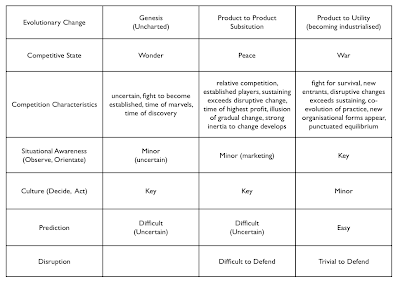 The point of this post is simple. For certain stages of evolution then culture is critical but for others situational awareness (i.e. strategic play) matters most. Now any organisation is a mass of activities at different stages of evolution hence some parts are predictable whilst others are not. You hence always need to strive towards good chess play and an adaptive culture.

As Techcrunch pointed out - "While We’re Trying To Follow His Game Of Checkers, Jeff Bezos Is Playing Chess" - some people are better chess players.  But the brutal truth is not that competitor CEOs are daft or foolish but instead they simply cannot see the board they're playing on. If you've ever played chess, you'll soon discover that not looking at the board is a quick way to lose.

Many are playing a game of blind chess and are unaware that whilst some change is uncertain, a lot of change is highly predictable.  It is fair to say that some companies are being disrupted because their executive teams don't know how to play the game and manage predictable change. However, in other cases (like RIM, Nokia) then cultural aspects mattered more because no amount of situational awareness can prepare you for an uncertain change.

When it comes to business, understanding the landscape, knowing the rules of the game and what is and what isn't predictable is a key part of playing the game and why I've used mapping for the last eight years. Bland statements like culture eats strategy for breakfast fail to appreciate the rich complexity of competition. Sometimes culture matters more, other times strategic gameplay and situational awareness are critical.  In the latter circumstances, no amount of the right type of culture will protect you from a better chess player. Of course, even when culture is supreme then you've still got to get the right balance of cultures within your organisation.

What? You think there's only one that matters?
Posted by swardley at 6:11 pm