The work I have presented here is no more than weak hypothesis. In this section I wish to describe what I mean by this and some of the limits of the work.

Scientific knowledge evolves through a similar pattern of concept (Genesis) to hypothesis to theory to universally accepted (widespread, well defined and well understood).  The characteristics of the knowledge change as it evolves with the results becoming more predictable and models of understanding more “modeled”.

Concepts themselves are simply ideas with little or no supporting data. By the time something becomes a hypothesis you would expect to see significant sets of data, correlation and causation and some predictive capability. The evolution graph itself (from which the rest of this body of work is derived from) has correlation over thousands of data points and causation through consumer and supply competition. It is however not directly predictable over time and one of the axis is certainty.

The certainty axis creates a problem as we can define something as a commodity with a high degree of certainty but in early stages it is more difficult to determine what something is e.g. is this a custom built system or an early stage product for an activity that will become a commodity?

Hence the data collected has been applied retroactively i.e. the past history of today’s commodities is what has been used to generate the evolution graph.  Prior to something becoming a commodity we can only guestimate what it is e.g. use aggregated expert opinion. The more evolved something is (i.e. the more certain) then the more accurate our guesses are likely to be.

When something is novel and new, we cannot determine whether it or something else will become the commodity for that activity. Whilst we know that the highest value is created in the product stage and therefore a system may represent a source of future value, our certainty over this is very low. As the system evolves then our certainty increases but also the future value declines as it becomes more ubiquitous. 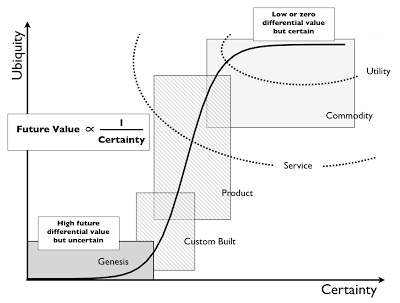 You can however may secondary predictions, so as something evolves then we should see co-evolved practices, new forms of organization which appear and then diffuse along with changing styles of competition (from “peace” to “war” to “wonder”). Hence along with correlation, causation and past historical data then we have also been able to conduct some secondary prediction tests. So far we haven’t broken the model. It is however only weak hypothesis but albeit an apparently useful one.

Expectation curves
The model was also used to examine the change of expectation over time. By looking at the differential benefit created by some novel thing minus the costs associated with it, we plotted a benefit curve over the evolution curve (see figure 59).

From this curve, something novel and new tends to incur costs (Research & Development) that exceed initial benefit, as the activity matures the benefit rapidly increases until a peak is reached. Then the benefit declines reach some form of plateau (minimal selling price). 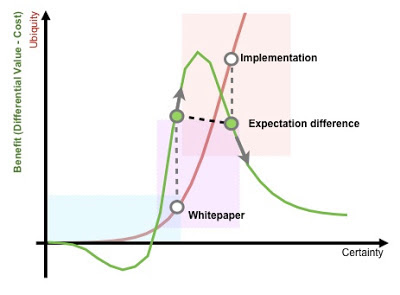 However, what’s interesting is to view the delta in expectation of the benefits for the consumer. For example, the consumer (as in business consumer) will often read some whitepaper describing the system and how it is changing things but there is a lag between when the paper is written, the decision to purchase and implementation. What was relatively novel when the whitepaper was written maybe commonplace by the time a company implements.

This creates a delta in expectation, as a company may believe that such a system will create a “differential” only to discover that “everyone now has it”. This delta in expectation was modeled over time to provide a generalized average “shape” (see figure 60). 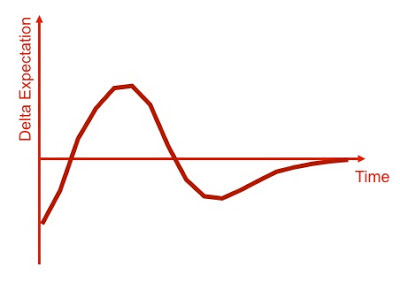 The expectation curve starts from a low base, has a peak of expectation, a trough of low expectation and then plateau’s to a level. This is similar to Gartner’s Hype Cycle (see figure 61). 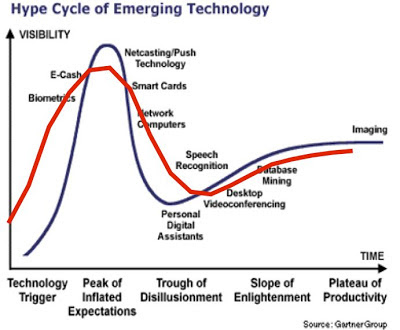 So, what does this tell us about the Hype Cycle?

Well, a number of things if we assume that the expectation curve and the hype cycle are the same phenomenon and the evolution curve represents change.

If the assumptions are correct then: -


Overall
The evolutionary model used throughout is simply a model, not the truth. It is weak hypothesis at best but has some supporting data with causation, correlation and secondary prediction tests. It does appear to be useful and makes some interesting observations on current management tools (e.g. hype cycles). It is falsifiable but as yet we haven’t managed to break it. As it currently stands, it is the best model we have to explain regularly observed phenomenon.