The problem with examining companies by value chain is that nothing stands still. Take for example, the multinational Finnish company Nokia. Originally founded in 1865 as a paper mill, the company has undergone many transformations through various close calls with bankruptcy. From paper to a rubber manufacturer (from bicycle tyres to boots) to consumer electronics (e.g. Fridges and Televisions) to telecommunications. The value chain of Nokia in recent years is radically different from the past.

So, if we map out the value chain of a company does that tell us anything about the future? At first glance the answer would appear to be a resounding “no”. Popular literature seems to imply we live in an environment of innovation (described through various terms such as radical, disruptive and incremental) and this innovation spreads and changes the world. This innovation can come from any direction, it’s often accidental and somewhat random and its impacts range from nothing to paradigm shifting. Hence our value chain whilst interesting appears fairly pointless as things we cannot see with random impacts will appear and potentially change the world.

Certainly, all these types of “innovation” spread in society and how they spread or diffuse is well known. Everett Rogers had shown in the 1960s that “innovations” diffuse from early adopter to laggards through a regular S shaped pattern (see figure 2). 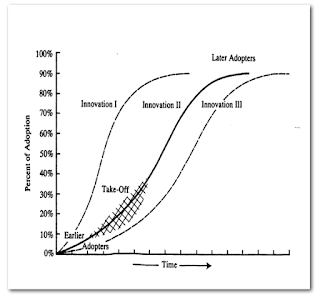 However, whilst this pattern which shows adoption of an “innovation” over time has a common shape, it is rarely the case that two innovations when drawn on the same time axis will match - some S curves are more stretched or distorted than others.

The prospect I faced in 1999 was any map was impossible. Whilst value chains could be described, these were impacted by innovations whose source often appeared random and which diffused through society at different rates. Take for example the innovation of electricity or IT which both had profound and widespread effects. How could these impacts possibly be predicted?

Two pieces of information then came to light which helped change my world view on the impossibility of mapping. The first was the work of a great and often under acknowledged economist Paul Strassmann who showed their was no correlation between IT spending and the value it created for business. What Strassmann’s work demonstrated was IT wasn’t one thing but many activities, some of which appeared to create value whilst others didn’t.

This deconstruction of IT was then reinforced by a Harvard Business Review paper published by Nicholas Carr in 2002 that showed that as certain aspects of IT became widespread and common they had diminishing differential value and became more of a cost of doing business.

The two pieces of work implied something remarkable but obvious. Not only do new things appear and diffuse but as they became more common they had diminishing value. Furthermore a function of a company such as IT consists of multiple activities many at different stages of this journey.

This journey is one from the innovation of a new activity (its genesis) to provision as a more ubiquitous and standardised item (a commodity). Along this journey many iterations of the item may appear (functional improvements) which diffuse in society. For a biologist (which is what I am by training) this journey sounded similar to the process of evolution.

In 2004, I started to collect data and map this process of evolution. After several false starts I eventually developed a model which the initial data I had collected supported. The model of evolution mapped the development of an activity over two axis - ubiquity (how commonplace something was) and certainty (how well understood, defined and standardised something was).

Later between 2006 and 2007, I was able to thoroughly test the model by collecting over 6,000 data points representing a wide variety of activities mapped across the two axis. The resultant pattern is shown in figure 3. 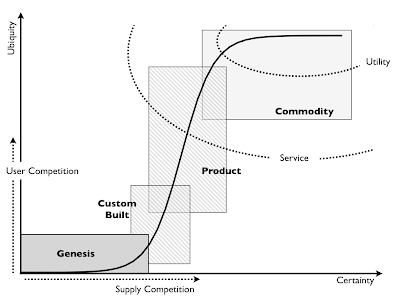 The pattern is not one of diffusion (i.e. adoption vs time) but evolution (ubiquity vs certainty). They are not the same, despite both patterns having the same shape (S-Curve).

Evolution shows how we start with the genesis of an activity (e.g. the first battery, the first phone, the first television, the first computer) and then how custom built examples are made, followed by a stage of product development (constantly improving generators, phones, televisions, computers), the introduction of rental models for the activity, commodity provision and finally (where appropriate) utility services for provision. We commonly use the term commoditisation to describe this path of evolution.

From the Parthian battery, to the Hippolyte Pixii to Siemens Generators to Westinghouse utility provision of AC electricity.

From the Z3 computer, to custom built examples such as LEO (Lyons Electronic Office) to the first products (IBM 650) to rental services (Tymshare) to commodity provision of computing infrastructure.

Every activity I examined throughout history mapped to the path.

As an activity evolves along the path, the improved iterations themselves diffuse through society - as per Everett Roger's work - with early adopters and laggards of the new iteration. The process of evolution is an inevitable consequence of competition (both consumer and supply) and what starts of as something novel and potentially a source of differentiation becomes commonplace and more commodity like (as per Nicholas Carr).

IT itself consists of a mass of activities (in the various value chains of an organisation) which are all evolving along this path, some of which create a differential value and some which are merely a commodity. Hence you cannot associate overall spending on IT with business value (Strassmann) as it depends upon what you’re spending on.

When it came to “innovation” - the genesis of something was clearly distinguishable from a feature improvement of a product or the introduction of a rental service model for a pre-existing activity.

Overall, the model had correlation (ubiquity vs certainty) and cause (competition), it shows how activities evolve and how some changes aren't quite as random as they first seem.

I now had two components - value chains (to describe an organisation and its environment) and a process of evolution (how activities evolve in a value chain). This was enough to put together a rudimentary map.