What I'd like to see from Brexit - part one of many.

Following on from my post of less of, more of regarding nation states - I'm firmly in the "more of" camp and would like see Brexit taking this direction. As I said I have my own strong biases here. 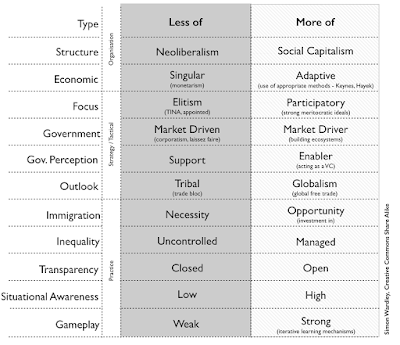 I thought I'd write a few posts and scribbled thought processes around this over the next few weeks.

Structure & Market
The neoliberalist ideals of less Government, laissez faire, market knows best are quaint but a simple examination of Western society shows that they are both divisive and less effective compared to a more social capitalist system such as China.  Without addressing these issues then the neoliberalist concepts is the road to serfdom as much as national socialism.

Let us explore one aspect of this discussion, the market. This is not a force for good or evil, it is simply a mechanism of exploitation which can be used for either good or evil. It contains many failures from discounting the future to asymmetric information to externalities and as such it needs management. Hence my preference is towards social capitalism, a view of the use of the market where appropriate as a tool to achieve an end. In the words of Deng Xiaoping "It doesn't matter in the cat is black or white, so long as it catches mice"

For example, industrialised utilities need to be regulated to prevent exploitation but the full force of the market should be allowed to rage in areas of product development. We should be mindful that the market works well when investing in applied R&D (the exploitation of research for a commercial opportunity) but tends to underinvest when it comes to basic R&D. This creates problems for the future (something the market tends to discount) because basic R&D tends to be the source of applied R&D. Accidental discoveries happen more often when experimentation is invested in. 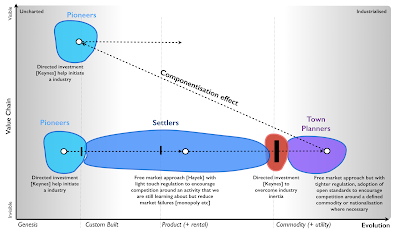 For example, in the exploration of new fields (a pioneering stage of wonder) then the role of Gov should be directed invested to encourage and enable exploration. It's a gamble on the future but all exploration of the uncharted space is. Large investment programs around basic R&D without the paraphernalia of exploitation (e.g. ROI) is required.

When things are discovered, the market should be allowed to exploit (with potentially the Gov taking a VC position). This is more a settling stage, a more peaceful stage of product development where sustaining development tends to rule, it is a time of refinement and learning. A more hands off free market approach is required (as per Hayek) with light regulation to encourage competition in all directions but to limit obvious market failures.

As the industry develops it will naturally gain inertia due to past success and hence a more directed is required again to force it towards utility forms. Though inertia exists in earlier stage changes e.g. custom to product, none of these are significant or more threatening than the change from product to commodity. That change is also essential for strong componentisation effects and future development. Hence Gov will need to take a pro-active and directed approach to force change usually by encouraging new entrants with more commodity forms into the market and reducing any regulatory barriers to entry.

As the change finds a new equilibrium around a commodity, a more free market around tighter regulatory constraints can develop to be provide well ordered components. This is more the town planning phase and it's here that nationalisation may become necessary if markets cannot behave and attempt to force differentiation on a commodity for reasons of self interest.

Everything evolves through the path but the trick is when does Gov invest or switch given we have a mass of activities evolving?  In the case of basic R&D that should be a constant, set at a high % of GDP. As soon as the market starts to exploit and custom build in a space that previously was being researched then the Gov should cut back in that space and re-invest in future explorations. Evolution during the settling phase is highly unpredictable because each step depends upon individual actors action. The best a Government can do here is in the early stages to encourage the formation of hubs or physical ecosystems with firms located near each other. Obviously this also gives opportunities to cope with other social pressures by dispersing those hubs around the country. However, beyond such encouragement the Gov must step back and interfere only when there are examples of clear market failure - health and safety, monopoly etc.

The inertia phase between product and commodity (a time of "war" as in "war with the past") is broadly predictable because it depends upon aggregate competition - see figure 3. Once companies have started to move across the boundary then defacto standards will emerge and the market encouraged to develop around. Since we can anticipate it, the Government can also effectively direct investment to encourage the change. 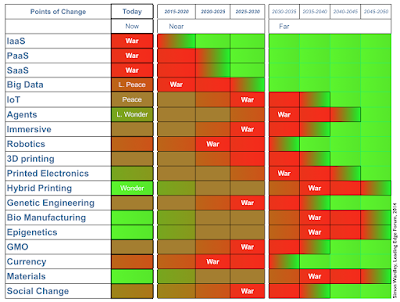 Hence using the above (from early 2014), as a Government then I would have been -

1) Focusing on defacto standards and encouraging industry adoption with IaaS / PaaS (i.e. cloud). Hence encouraging growth and development of a commodity market around Amazon, Google and MSFT.  This is something I'm glad to see the UK Gov has been doing with all those companies setting up operations in the UK. Unfortunately even within Government there are some departments (e.g. HMRC) that seem to be stuck in a product mentality (i.e. building rental services such as private cloud). I'd probably be looking at regulating in favour of standards around AWS, Google and MSFT and given free sovereignty introducing laws to enable Gov to declare specific APIs as open standards.

2) Encouraging creation of utility services around Big Data with Gov acting as a VC in this space with significant scale investment but less of them. This field was just at the cusp of entering the "war" and a bit of directed investment by Government to encourage new entrants providing utility forms was required to overcome inertia that many product vendors would have.

3) For the vast majority (IoT, Robotics etc) then a free market is appropriate. I certainly would be looking at providing incentives to create hubs of companies purely due to the effects that local proximity and the movement of staff have in encouraging competition. Over time, some of the markets will need directed investment as inertia barriers are reached and new entrants will need encouragement to create commodity forms.

4) In the area of intelligent software agents, just on the cusp of leaving the genesis stage (the wonder) and entering the stages of custom built and products (known as peace) then I'd probably be planning to cut back on Government funded R&D and directly investing in creating hubs of companies to exploit and develop the space. I'd be acting again as a Gov Investor but more like seed funding with a high degree of uncertainty i.e. lots of very small bets.

5) In certain areas, Materials, Epigenetics, Bio Manufacturing, Hybrid printing then Gov would need strong R&D efforts to encourage exploration. I would certainly be providing disproportionate funding in those areas compared to say Robotics or IoT in which the market players should be investing.

It's probably worth noting in the above that there are different styles of investment from a few big bets in the product to utility "war", to incentives and encouraging hubs (i.e. physical ecosystems) to Government seed funding and directed funding into basic R&D. Do note, the way you invest in the creation of a company around a new activity is very different from the way you should invest in a new entrant building a utility for a pre-existing system. There are very different risk profiles, practices and gameplay that should be followed.

The point of this post is simple, even with something like managing the market then the Gov needs to be adept at applying multiple methods and techniques at the same time - using a Keynesian style approach in one industry whilst using a Hayekian style approach in another. This is, of course, just one small aspect of social capitalism and to operate it requires high levels of situational awareness and gameplay within Government.

If we don't become better at this gameplay, don't expect other nations to the return the favour.  In particular, China has become very good at directed investment, encouraging markets around hubs of companies and applying appropriate Government methods to the context. The level of strategic play in China vastly exceeds that which I normally see in the West.

For reference, there are various post describing the cycle of peace, war and wonder. Two that I particularly like are Revolution and The Best Summary.
Posted by swardley at 12:32 pm