Ok, this post provides a quick analysis of the Scenario. As a guide, this sort of analysis should take about 30 minutes. To get the most out of this exercise, read the scenario post, write your plan and then read this analysis. In a final post, we will go through gameplay.


First, lets start by creating a basic map. Our users are data centre operators, they have a need for a mechanism of improving Data Centre efficiency in electricity consumption, we have our software product which is based upon best practice use of an expensive sensor that we purchase and a custom set of data. This is shown in figure 1. 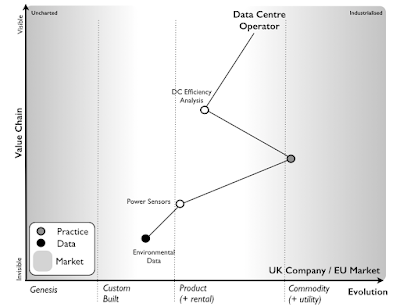 In this exercise, I'm going to slowly build up the map. Normally, I would just dive into the end state and start the discussion but that'll be like one of those "it's therefore obvious that" exercises in maths which often confounds others.

First of all, I'm going to add some bits I know e.g. we anticipate an opportunity to sell into Brazil (I'll mark as a red dotted line) and we have a US software house in our market selling a more commodity version as a utility service (I'll mark as a solid red line as it's something that is definitely happening). From the discussion with the head of sales (who was rather dismissive of the US effort) and the strategy, I already know we're going to have inertia to any change, so I may as well add that in (a black bar). 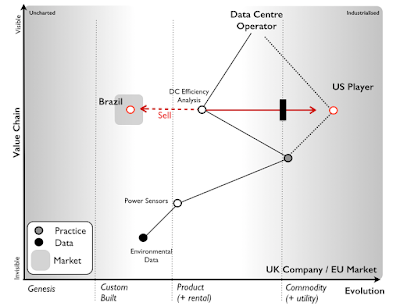 However, we also know that the US version provides a public API and has a development community building on top of it. The US company is also harvesting this, probably through an ILC like model. The consequence of this, is the US company will start to exhibit higher rates of apparent innovation, customer focus and efficiency with proportion to the size of their ecosystem. Those companies building on top of their API act as a constant source of differential for them. I've added that in the figure below. 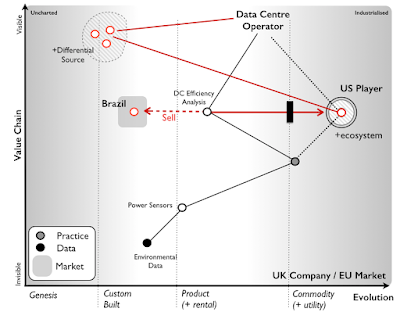 Given the US company growth last year and that a shift from product to utility is often associated with a punctuated equilibrium, I can now take the figures and put together a P&L based upon some reasonable assumptions. Of course, we're missing a lot of data here in particular the development cost of the software etc. However, we'll lump that into SG&A. 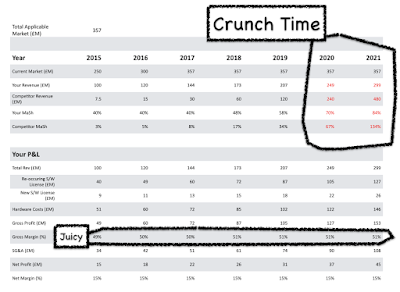 Ok, so what I now know is that we seem to be a high gross margin company (i.e. a juicy target) and a good chunk of our revenue is repeating software licenses. If this is a punctuated equilibrium (which seems likely) then I expect to see a crunch time in 2020 between us and our US company as we will both have around 50% MaSH. Unfortunately, when that happens then they're likely to have higher rates of efficiency, apparent innovation and customer focus due to their ecosystem play. Furthermore I'm going to have inertia to any change probably due to existing practices, business and salespeople compensation.

If I do make a utility play then I'm going to need to gain the capability to do this, raise the capital needed to build a utility and launch fast. Let us suppose this takes two years. Then I'll be entering a market where my competitor has 8 years of experience with a large & growing ecosystem and 100% MaSh of the utility business (worth £30M to £60M). I'll have no ecosystem, no MaSh and a salesforce probably fighting me and pointing out how our existing business is worth £144M to £173M. In the worst case, if I haven't explained the play properly then they could even be spreading FUD about my own utility service and trying to get customers to stick with the product.

Even my own board could well push against this move and the talk will be of cannibalisation or past success.  Alas, I know our existing business is a dead man walking. Post 2020 things are going to be grim and by that I mean grim for us. Despite the competitor only being 3% of the market, I've already left it late to play this game. I've got some explaining to do to get people on board.

Unfortunately there is more bad news. Let us look at that the other changes in the market, such as the shift of sensors. 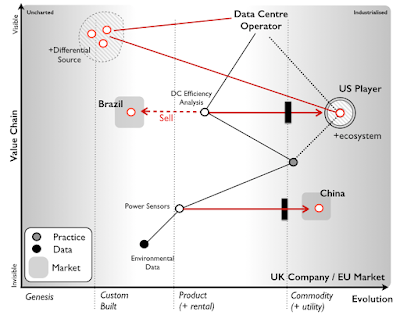 Now, we've already seen signs of inertia in our organisation to using these sensors. As the product manager says they're not as good as the old. However, we also know that as an act becomes a commodity then practices co-evolve and new methods of working emerge. Hence the future systems probably won't have one sensor in the data centre but dozens of cheap ones scattered around. Unfortunately, our software encodes best practice around the expensive product based sensor and if the practice evolves then our software is basically legacy. I've added this to the diagram below, however rather than using a solid red line (something we know is happening) then in this case I've added a dotted line (something we anticipate or an opportunity). 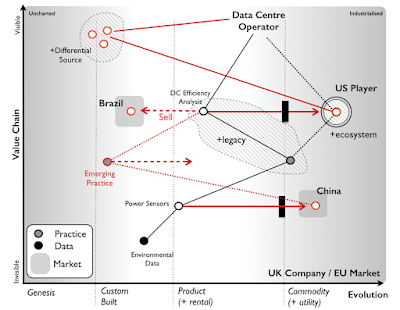 So, our business is being driven to a utility and we don't have much time. Even if we get started now then by the time we launch we'll be up against an established player with a growing ecosystem. Our own people will fight this change but even worse our entire system will become legacy as commodity sensors lead to co-evolved practice and new software systems designed around this. So along with my head of sales and marketing fighting me, I'm pretty sure I can add the product manager and a good chunk of an engineering team that has built skills around the old best practice.

Now, if you're used to mapping then you'll have spotted both the punctuated equilibrium and the danger of co-evolution. As a rule of thumb, these forms of co-evolution can take 10-15 years to really bite (unless some company is deliberately accelerating the process). Hence, even if we somehow survive our current fight in the next five years, we're going to be walking smack bang into another one five years later.

Of course, at this point I need to start to consider the other players on the board e.g. the US competitor. They're already providing a utility play, so we can assume that they have some engineering talent in this space. This sort of capability means they're likely to be pre-disposed to building and using more commodity components. The chances are, they're already thinking about the commodity sensors and building a system to exploit this. That could be a real headache. I could spend a couple of years getting ready to launch a cloud based service based upon the expensive product sensors and suddenly find I'm not only behind the game but the competitor has pulled the rug under me by launching a service based upon commodity sensors. I'll be in no man's land.

The other thing I need to look at is that conversion data issue. I know it's evolved to a product but it could easily be pushed to more of a commodity or provided through some API and play some form of open data ecosystem game on me. I've shown this in the following diagram. 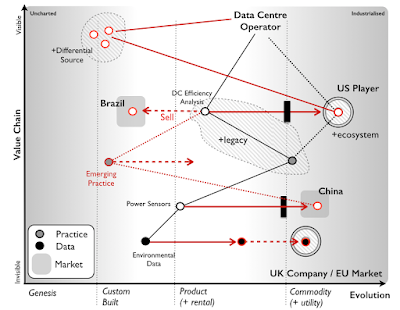 I've now got a reasonable picture of the landscape and something I can discuss with others. Before I do, let us check the proposed "Growth and sustainability in the data centre business" strategy.

First up was expansion into Brazil. This will require investment and marketing but unfortunately we're not dealing with the issues in our existing market. At worst, we could spent a lot of cash on laying the groundwork for the US company to chew up Brazil after they've finished chewing us up. Still, we need to consider expanding but if we do so in our current form then we're likely to lose.

Second was building a digital service including a cloud based provision for our software system that enable aggregated reporting and continued the licensing model. Ok, one of the killer components of the US system is the API and the ecosystem it has built around this. We could easily invest a significant sum and a few years building a cloud based service, enter the market and be outstripped by the encumbent (the US company) because of their ecosystem and even worse find our entire model is now legacy (because of co-evolved practice). I know it's got the word "digital" and "cloud" in the strategy but as it currently stands then this seems to be a surefire way to lose.

Thirdly, the strategy called for investment in sales and advertising. Well, we've plenty of cash but promoting a product model which as it stands is heading for the cliff and may become entirely irrelevant seems a great way of losing cash.

Lastly, we're to look into the use of the data conversion product. Ok, this one doesn't seem so bad but maybe we should drive that market to more of a commodity? Provide our own Data API?

On top of all this, we have lots of inertia to deal with. Now that we understand the landscape a bit better then we can craft a strategy which might actually work. Of course, I'll cover that in another post. However, in the meantime I'd like you to go and look at the scenario, look at your original plan and work out how you might modify it.