The Towers of salmon and hungry bears

My post on the Towers of SIAM reminds me of a story I was told by one senior 'US official'. He used the story to explain how Government procurement works. He called it 'Bears and Salmon' and it went roughly like this ...

"Some of these suppliers are like bears. They expect to sit in the stream that is Government, stick their jaws into the water and scoop up tasty mouthfuls of food. Every year they expect their bounty to get bigger and their stomachs to be fuller.

One day, the salmon (that's us) decide we're going to take a different stream, we're going to find a better way of doing things because we're not about feeding hungry beers, we're about making the lives of people better. The bears stick their jaws in the water. No Salmon! They get angry.

The bears roar "It's our fault". "We shouldn't be allowed to change" they cry. We get told that by changing streams then all the bears will die. It will all be a disaster because we didn't keep swimming in their stream and jumping happily into their jaws. "They are our partners" and we need to work with them.

I don't feel like a partner, I feel like lunch. The bears should move and we should change streams more often."

Well, over the years UK Gov IT has changed streams. It has made it clear that it wants to focus on transparency, make things better, not being not afraid to admit mistakes, use modern practices and focus on our needs (as in ALL of us). Judging by the negative reaction to Alex Holmes' sensible post then some bears are angry.

Don't be surprised by how ferocious this might become. As Computer Weekly points out 'while large systems integrators still dominate government IT spending – thanks to the revenue from existing long-term deals – their share of new IT purchasing has fallen.'

First, it's important to understand why the changes need to be made. I think Derek Du Preez nails it with the following paragraph

The idea of Government as a Platform, re-using commodity components and providing services between departments to improve efficiency and speed must be truly frightening for some bears. There's a lot of profit made in massive amounts of duplication and the constant rebuilding of something that has already been built. Of course, you can't build such a platform if every department is using a silo'd approach and busily breaking projects into contract chunks which they outsource.

What people forget is that Government as a Platform is unlikely to lead to smaller IT in Government. Yes, it means the things they do now will be more efficient but this almost always leads to new services. There is a long tail on unmet demand. Vendors might not be able to flog their old wares but then they can adapt ... bears need to move to a different stream when the salmon do.

In the bad old days of 'cloud', you'd hear vendors warning IT folk in a company that cloud would get rid of their jobs. Cloud doesn't reduce IT expenditure, it's enables us to do more things. Today I can buy with a $1,000 over a million times more compute than in the 1980s. Has my IT budget reduced a million fold because of this? No. We've just done more stuff.

As things become more standard and cheaper components then competitors build new things more quickly. We have to keep up, we have to compete. The same holds with nations. Some don't realise that other nations are looking at and building Government as a Platform. They will end up doing more stuff and creating advantage for their economies. We have to compete. Alas, that does mean the bears must move. They won't want to.

In these situations, inertia to change (there are sixteen different forms) normally exerts itself more visibly. This inertia can be seen from both the vendors (the bears) and those customers (salmon) who've become a bit too close. Often vendors will play up inertia in customers in order to keep existing contracts. For reference, I've included the types of inertia you'd expect to see in table 1. 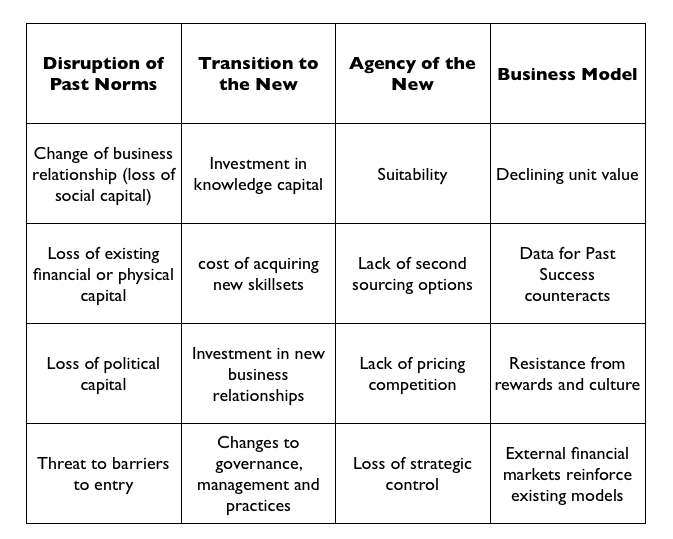 So when John Jones, director of strategic sales architects, Landseer Partners, which works with a number of suppliers on bids, including on service towers and SIAM, said

Then you have to ask, if UK Gov has been running outsourced contracts for a few decades but not acquired strong contract management skills in that time then something is clearly wrong. Yes, there might be a need to invest in knowledge capital along with some cost of acquiring skill-sets (which they should really have) but that's no excuse for continuing with the past.  Is this supplier helping UK Gov or playing to inertia in the organisation?

I'll be keeping an eye on this over the next few weeks, should be interesting to see what examples turn up.
Posted by swardley at 11:14 am