Throughout this blog and my talks, I've covered the question of mapping (understanding the board), the rules of the game (economic change) and given examples of game play. Mapping is critical to understanding the environment you exist within and "where" you might attack, "why" being a relative statement of why here over there.

However, I want to put up a warning because I was recently asked whether mapping itself can be a source of competitive advantage or differential.

Tl;dr Rarely can mapping be a source of competitive advantage, it's more a survival tool.

Back in 2005, myself, James Duncan and Greg McCarroll (who recently passed away) mapped out Fotango, the company I was CEO for, and used the map to determine where we should attack in the future. From this, the project which became known as Zimki - a platform as a service play - was born along with all the gameplay around it.

The map is provided in figure 1. This is not the original but a simplified version which I've tidied up adding more recent terms like "uncharted" and "industrialised" to describe the different domains. The map describes the value chain, the evolutionary state and inherent in this was :-

1) How activities evolves and characteristics changed, leading to agile being useful on one side of the map and six sigma on the other.

2) Inertia to change that organisations have. 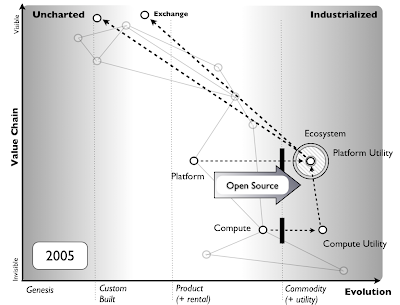 The single most important thing you can take away from the map however is the date - 2005. There are people out there who have almost a decade of experience in playing these games within companies. James fortunately works for UK Gov these days but there are many others who have long and detailed experience of this.

Which brings me back to the question of competitive advantage. Certainly mapping can provide an advantage when you're playing a "blind chess" player (a category of companies we define as 'chancers') which admittedly many companies do an excellent job of emulating. But there are some very dangerous foes out there. If you think mapping alone is going to give you an advantage over some of the big players in the cloud space then think again. Some of these companies are run by very accomplished chess players.

In these cases, I'd be using mapping to find another route by which you can build a company and avoid any head on confrontation - you will tend to lose, they will tend to outplay you, they have the experience and they've built highly defensible positions and strong ecosystems. Knowing when to withdraw from a battle to conserve resources in order to fight on another front is one of the hardest things I know for a CEO to do. No-one likes to admit defeat, no CEO likes to accept they've been outplayed and many companies are lost pursuing conflict driven by ego.

More than inertia, poor situational awareness and chess play - the hubris involved and continued pursuit of the un-winnable battle is what I like to call the "Kodak Moment".  Whilst it is common for people to state "but Culture eats strategy for breakfast" just remember that whilst culture is always important, there are times in the economic cycle where strategy is more important.

We are in one of those times within the IT field (including every industry where IT is a main component of its value chain). There is no hiding place here. The cause of company failure whilst it will be blamed on lack of engineering talent or poor culture or inertia is not caused by this. Companies will principally fail because of poor chess play by 'peace' time CEOs.
Posted by swardley at 2:27 pm