Tl;dr Competitive gameplay requires an understanding of the landscape, the rules and experience in playing the game - there are no shortcuts.

I read an awful lot at the moment on Entrepreneurship and I have to say that most suffers from a one size fits all mentality. It's the same issue with statements like culture eats strategy for breakfast  but usually expressed in terms of the top ten secrets of being a successful entrepreneur. Alas competition isn't that simple and the methods you use have to adapt with what you're doing. To demonstrate this I thought I'd cover some of the basic games of competition.

First, let us start with the simple premise that competition in business is like playing a game of chess. In order to play the game then you have to understand the board (the landscape), the rules of the game and then learn how to play. Many companies I met have no clear way of understanding the board let alone anything else. Hence everything seems random and one size fits all - either agile versus six sigma, push vs pull, network vs hierarchical, unstructured vs structured - tend to rule and we're bombarded with over simplifications from culture to disruptive innovation.

Contrary to popular belief there are ways of viewing the board. A technique that I've used successfully for the last eight years is mapping and I've given an example of a map from an extremely large heavy engineering project in figure 1. 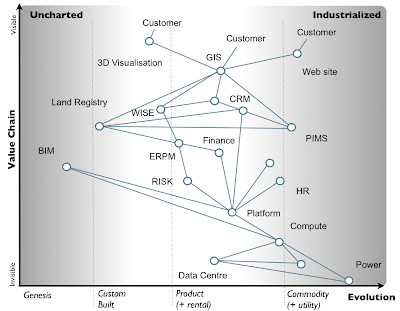 The map uses an axis of value chain from the visible needs of customers to the more invisible components needed to meet those needs versus an axis of evolution i.e. how evolved those components are. Once you have a map, there are some general rules of the game that need to be understood.

Ok, now we have an idea of how to map and the basic rules of the game we can talk about four basic smackdowns of competition - i.e. how you fight.

Building the new
The first play is to build something that is actually novel and new i.e. the genesis of an activity such as the first ever telephone, first ever computer, first ever television. By nature this is highly uncertain, you don't know what customers will actually want as the act is new.

You need to be adaptive, take a minimal viable approach and quickly create feedback loops with customers. You're in a fight to establish the new thing as being relevant and useful often in the face of bewilderment. Inherently this whole approach is uncertain, you just don't know whether it will succeed and whether people will want it.

Building the novel and new can be done at any time, though there are certain times when the cost of reduction of underlying components makes certain novel acts possible.  The first televisions depended upon home electricity supply to be economically viable. This is why whenever we have an economic state of war caused by commoditisation (Custom made nuts and to bolts to standard nuts and bolts with Maudslay Screw cutting lathe, Electricity from own generators to utility services with Westinghouse and Tesla, Computing from products to utility services with Cloud)  then we see an explosion of higher order novel systems - a state of wonder.

However being economically viable doesn't mean the act will succeed. Because the act is uncertain then you just don't know if it will work, you have to experiment, to fail fast and to gamble. Get used to it and work on this basis.

Substituting one product with another product
A second play is to go after an established product market with a view of substituting it for your product. I'm not going to talk about the more general product versus product competition of improving features as this is normal fare but instead the replacement of one category with another e.g. one format of hard drive with another format.

To do this you have to find a property of the value chain which is not catered for and which will become important - e.g. size of hard drive, power consumption, provision of an application store. This novel property is uncertain and to establish it you'll almost always need to find an underserved market due to inertia within existing markets (i.e. customers and vendors are used to the other format). This is the classic case of disruptive innovation, using an uncertain property often developed in an alternative market to improve the product to a point that you can assault the main market where the vendors will be suffering from inertia due to existing business models.

The uncertain nature of the property is both friend and foe. It protects you against incumbents because they'll tend to dismiss it but at the same time you don't know if it'll work. Hence this is another gamble but when it works you can seriously damage incumbents and take a chunk of the future e.g. smart phones vs mobile phones or ARM vs Intel.

Substituting one product with a utility
A third play is to go after an established product which is widespread and fairly well defined and create a utility service for it. This has all the benefits of a product to product substitution with existing vendors having inertia however it has several advantages over the former. First, it's not uncertain but instead a known process of evolution not reliant upon creating novel properties, hence it's far less of a gamble. Of course, this means it's more defendable against but since most companies have poor situational awareness of the landscape (i.e. they can't view the board) then they're not likely to defend against your move.

Secondly, you can use ecosystem effects through models like ILC along with a host of other tactical plays such as using open source, open APIs, open data to enhance your position. This is the easiest play to make and the one most likely to give you success however the opportunity to make such a play depends upon the act being suitable and so you have to wait for the right timing.

This is what has been going on with cloud and why I talked at OSCON in 2009 on how it was the perfect time to disrupt great giants. It might feel like you're David vs Goliath but just remember Goliath is looking the wrong way and can't see you coming.  You don't have to worry about their size, all they will do is help validate your market.  Naturally, the easy pickings have already been taken though some opportunity still exists but the window is closing.

Examples of this include Amazon vs Dell, where Dell has now had the good sense to realise it has lost the public computing infrastructure battle for an activity (computer infrastructure) which it once was a dominant player. Knowing when to retreat is also an important part of the game.

Don't worry if you've missed the boat a new window of opportunity will open up around 2020 related to 3D printing / Printed Electronics and commoditisation of the manufacturing industry.

Substituting one utility with a utility
A fourth play which is incredibly hard to make work is to substitute one utility with another. Once a utility gets established and inertia sets in due to a large ecosystem built on top of the component provided then it's difficult to shake it. It becomes very hard if the vendor behind this is playing a good ecosystem game. Taking this on is less David vs Goliath and more like David vs Goliath and an Army of His Brothers all pointing straight at David with Gatling guns.

To stand a chance, you'll have to counteract the impact of their ecosystem. Now remember, this isn't the same as a product ecosystem where information flows are slow (i.e. marketing surveys) but one which information flows are based upon consumption data and are almost real time. This is the toughest of all battles and the best plays are around co-option rather than substitution and huge bets i.e. think billions per year if you're taking on Amazon. Oh, and you'll need a master kung fu black belt oracle of strategy to make it happen and before you think you can just hire one, the number of people that I know who can pull off this trick are very few. They currently work for Amazon, Google, Microsoft, Dell, UK Gov, Cambridge University, Canoncial and seven other companies. None of them are consultants, you've almost certainly never heard of them and most of them are very wealthy. Good luck in trying to find one.

Now there's a myriad of options and gameplay beyond the four basic smackdowns from the use of resource constraints against opponents, weakening focus by reducing barriers to entry in an opponents business models, misdirection, tower and moat play, use of alliances, organisational structure and cultural fit, to an endless barrage of dark arts. Remember I've been doing this for eight years and it would take a long time to write this all down.

However, the point I want to mention is that even with the four basic smackdowns the approaches you need, the type of information available, how you focus, where you attack and when you can do this vary from a high risk gamble (building the new) to a low risk but time dependent gamble (product to utility substitution).