I was asked a really odd question recently - "Should a company be a first mover or fast follower of innovation?"

To explain why requires a long post covering value, perceived value, componentisation and evolution. This won't be an easy ride for those new to my work but manageable for those who are familiar.

An idea is something with social value and the implementation of that idea as a new act can creates economic value, if that act provides a differential between companies and if it is useful. This process of transformation from social to economic value is known as commodification.

As that activity evolves, the various iterations will individually diffuse through society until the activity becomes commonplace, well understood and its differential benefit reduces to close to zero i.e. what started with a high differential value due to its scarcity ultimately evolves to have little or no differential value because it is commonplace. It has become a commodity and when discussing activities then this process of evolution (see figure 1) is commonly known as commoditisation

Often the two terms are confused but commodification and commoditisation are separate.

Figure 1 - Evolution (aka commoditisation when dealing with activities) 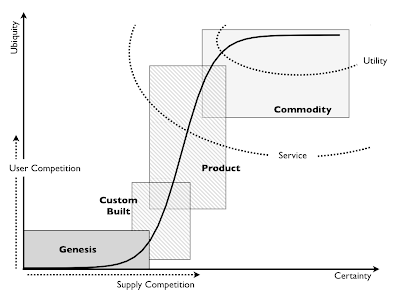 At the same time that an act commoditizes and its differential value declines, it also becomes a necessity and a cost of doing business. For example, the once wonder and differential of a mobile phone has become a cheap necessity for most. This creates a situation where the unit value of something maybe declining as it becomes more common (i.e. less scarce) but the total value is increasing due to volume. This is summarized in Jin Chen’s “Entropy Theory of Value” and the relationship between value and scarcity is provided in Figure 2. 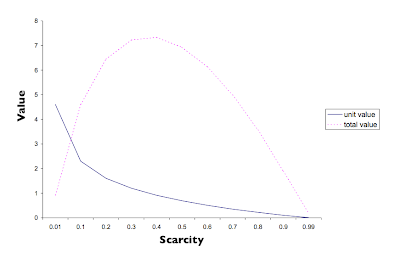 From the figure above, as the act become increasingly more common (moving from left to right along the scarcity axis) then the unit value declines but the total value (volume multiplied by unit value) reaches a maximum before declining. Along with a change in value, we also see the cost of production of each unit reducing with volume. For example, the cost of production per unit for a standard mobile phone is vastly less than the cost of production of the first ever mobile phone. As a result the Transitional phase (the domain of custom built and products) also tends to be associated with the most profitable with the highest total value and declining production costs. In practice, this area of highest profitability tends to extend further than anticipated because the economic value associated with an activity tends to exceed the differential value it actually brings us due to effects such as branding, confusion of choice, poor information and our inability to determine actual value. Even today we tend to view systems such as financial ERP (Enterprise Resource Planning) as providing some form of differential value despite the commonplace use of ERP systems and wide spread copying of customization. Hence we often associate more economic value to ERP than we should i.e. our perceived value often exceeds the actual value something creates. This effect is quite common.

Notwithstanding the issue of perceived vs. actual benefit, the general form of how benefit (e.g. total value minus cost of production) varies with evolution for a new activity is shown figure 3. A similar pattern also occurs with changes that provide operational improvements and are hidden behind the interfaces of standard components. 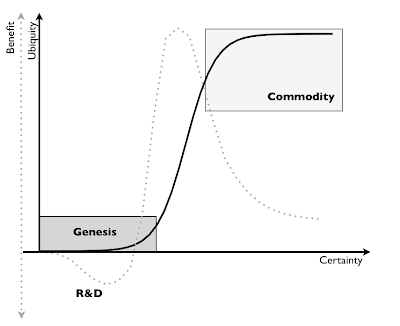 From the figure above, the genesis of an activity is normally associated with a negative benefit due to the burden of research and development costs, however these are quickly overtaken by rapidly increasing sales volume for a relative high margin product. As the activity evolves the unit value declines along with production costs to achieve a minimum plateau. 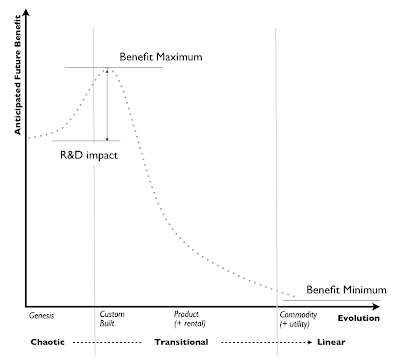 So for any act, the future benefit grows in the initial stages to a maximum i.e. the impact of research and development reduces. Once this maximum has been reached then the future anticipated benefit has an inverse relationship with certainty and as the act becomes widespread and well defined its future benefit hits a minimal plateau. Alas, for any specific act, since we have no way of peering into the future and those things with high future value are equally those things we are less certain about then gambling is a necessity.  However, since there is a maximum, Fast followers who make custom built examples of the act and then go onto productise it will gain the maximum advantage. In general: -

The Chaotic phase (for activities, genesis of the novel and new) is associated with high costs, high levels of uncertainty but potentially very high future values. Being first is not always the best option though.

The Transitional phase (for the activities, custom built and products) is associated with reducing uncertainty, declining production costs, increasing volumes and highest actual benefit and hence profitability. Whilst the environment has become more predictable, the future anticipated benefit is also in decline. This accelerates, as the activity becomes more commonplace, more defined and more of an expected norm.

The Linear phase (for activities, the domain of commodity and utility services) is associated with high certainty, high levels of predictability, high volumes, low production costs and low unit margin. The activity is not seen as a differential but an expected norm, it has become commonplace. Those activities that have evolved to this state (e.g. nuts and bolts) are seen as having minimal differential value and the perceived future benefit is minimal. However, despite this they also provide a regular and sustainable source of revenue.

If we take these different areas of value and superimpose on a figure showing how evolution enables the rapid development of higher order systems (see figure 5) then we see that the new higher order systems are also associated with highest future benefit whereas the underlying components are associated with minimal future benefit (in terms of differential). 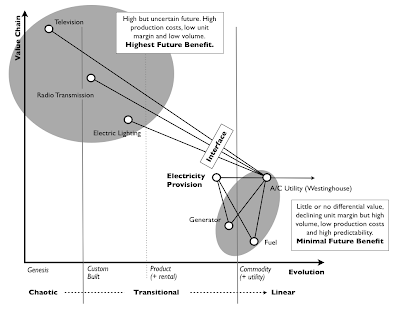 As a result, when an activity evolves to more of a commodity we not only see higher levels of efficiency and increased agility in building higher order systems but we also tend to see a flow of capital from past industries to these new industries because they are perceived as the source of future value or wealth. This flow of capital to the “new” is part of the phenomenon that we know as Creative Destruction by Joseph Schumpeter.

The future benefit curve applies equally to differential value with the creation of novel and new things as it does to operational improvements and provision of a more evolved component. However, the fast follower method is more appropriate when we are discussing the creation of something novel and new rather than a more evolved means of providing an existing activity. In the latter case, being a fast follower to a more commodity means of provision has an additional burden in terms of a company’s ability to create and extract benefit from higher order systems. 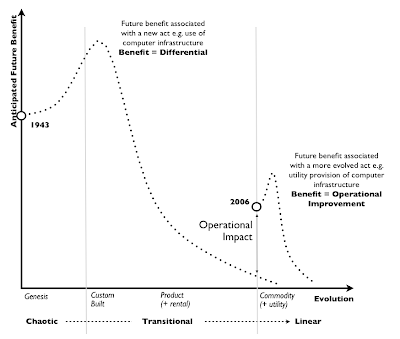 From the above, in 2006, the act of using computing infrastructure can be considered as having little or no future benefit in terms of differential value and instead is simply a cost of doing business. The shift towards utility provision in 2006 does provide some operational impact that quickly declines and a maximum benefit is always possible by not being the first to adopt due to the cost associated with changing practices. 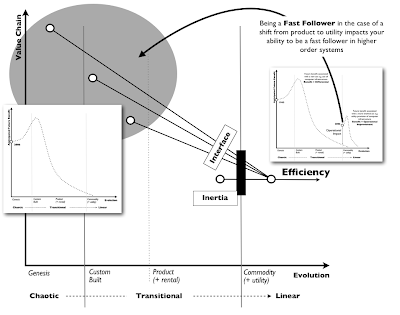 From the above, as the activity evolves from a product to utility provision, both consumers and past vendors have inertia to the change.  The more evolved method of provision offers some benefits through operational efficiency and being a fast follower maximises this benefit due to any changing practices associated with the act. However, the more evolved act also enables new higher order systems to form that in turn are new sources of future value. Being a fast follower in implementing the more evolved activity may impact a company’s ability to be a fast follower in implementing these new sources of future wealth.

A general rule of thumb is therefore provided in figure 8. Being a fast follower generally creates the maximum advantage when we’re talking about the genesis of something novel and new (i.e. an act which has not existed before). However, being a first mover can create the maximum advantage when dealing with the evolution of a pre-existing activity from product to utility services due to componentisation effects. 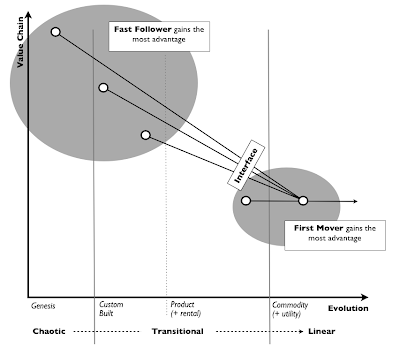 Ideally a company wants to be a first mover when it comes to commoditisation but a fast follower when it comes to genesis. This is also why ecosystems are incredibly powerful models, as the approach of ILC (innovate-leverage-commoditise) creates a constant position of being a fast follower to genesis (i.e. others innovate, you leverage the ecosystem to spot diffusion) whilst at the same time the act of commoditising means you're a first mover (see figure 9 & 10) 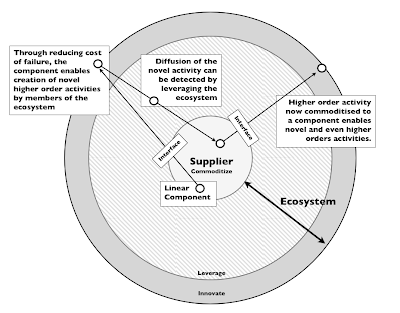 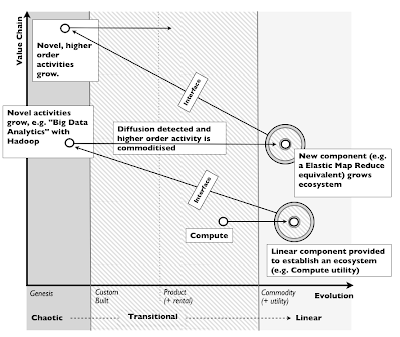 The original question also highlighted why the general use of the term “innovation” to cover multiple things (genesis, feature differentiation, utility provision of an existing act) is so confusing because the answer to  “should you be a fast follower or first mover with innovation” is “both”.

Ideally, you want to be a fast follower to Genesis but a first mover to Utility provision.

I still call the transitional phase ... transitional. It amply describes the "in-between" state.
Posted by swardley at 6:12 pm