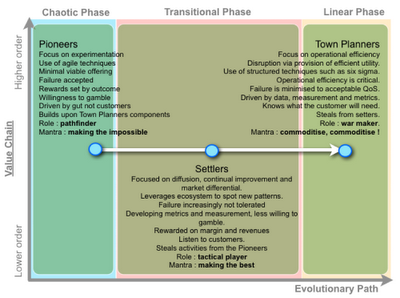 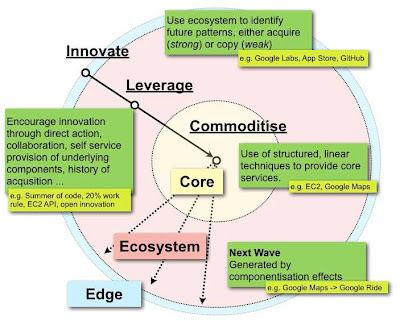 Good article. Now we just have to solve how hierarchic companies in the linear phase shall manage to house loose networks which is what the pioneers need. :-)

Remember companies consist of a mass of activities, some of which will have evolved to more commodity (the linear phase) others will be genuinely new (more chaotic)

It's perfectly possible to do organise around this flow from chaotic to linear as long as you first start by realising that things evolve, as they do characteristics change and "one size fits all" doesn't work.

The problem with this, is that it does make management more complex. And, alas their are two solutions to Ashby's law of requisite variety.

In case you don't know the law, the controlling element of a system needs to have as much variability as the input and outputs of what is being controlled in order to be effective.

Given organisations are complex systems, you can either solve this by a management layer which is able to cope with complexity or you can simplify the inputs and outputs to a point where the management layer can cope. What generally tends to happen is companies do the latter with KPIs and other tools.

This is just the information I am finding everywhere. Thanks for your blog, I just subscribe your blog. This is a nice blog..
pythagorean identities