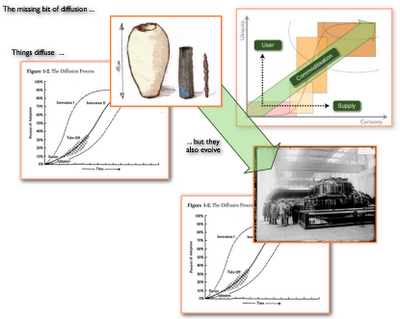 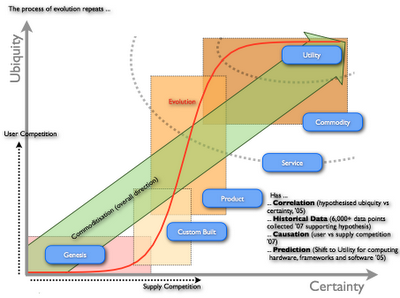 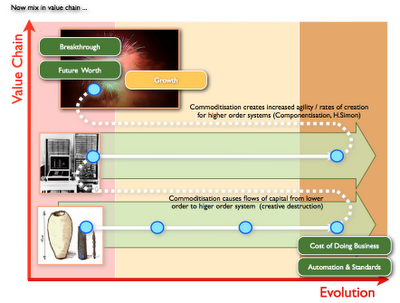 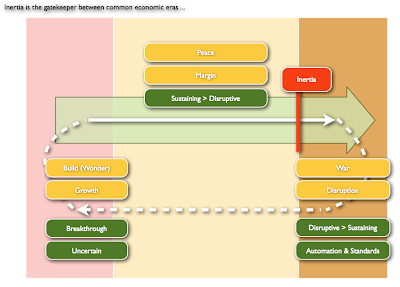 I'm guessing that you haven't read Hayek's Nobel acceptance speech on the pretense of knowledge, then. How can you possibly say that you are pro-Hayek??

I'm very aware of Hayek's speech but as right as it is, it is as flawed for the same reason. The problem is time.

Most economic hypothesis attempt to predict over time but we're talking about the interactions of a complex set of components and events, many of which are uncertain. The interaction of these make prediction over time impossible, it acts as an uncertainty barrier we can't see through.

So, to my point there is a time to steer the market and a time to set it free ... the obvious question is when is that time? The answer is, you can't know with certainty.

Now look at my evolution graph on figure 2. There is no time axis. This is because you can map evolution but only if you abolish the concept of time and map it instead over user and supply competition (ubiquity vs certainty).

The more evolved something is, the more accurately we can state where it is on the curve (because it has become more certain). Time is simply where it was at different stages of evolution i.e. nuts and bolts to 2000 yrs to travel that curve whilst computing took about 60 yrs.

Using the graph you can only truly map evolution backwards over time (i.e. once something has become a commodity, you can say where it was) and never forwards over time. The uncertainty barrier of time remains intact.

So, whilst we can't predict over time (i.e. this policy is suitable for this specific time), we can say this method (i.e. steer or set free) is more likely to be appropriate now.

The problem is and always has been prediction over time. No amount of data will ever get you past this problem, it's inherent in the axis of figure 2.

So Hayek is right to have said we cannot predict as per the physical sciences due to the complex interactions of the market for which we have an incomplete picture. Even if we had a complete picture we still couldn't do it, over time.

But, he was also wrong on the same point because we can make guesstimates to where we are and use this to determine what is likely to be the best course of action.

Now the counter should be that the market is best to make those guesstimates. Alas the market has inertia to change and is too focused on the fools errand of trying to predict over time (from interest rates to stock prices to ... you name it).

I'm very much Pro Hayek but also Pro Keynes in terms of their policies. Deciding which one to use is something which can be estimated just not predicted over time.

Time, has always been the problem.

So, like any gardener we can learn when to prune, when to feed, when to treat and when to harvest.

However, just like any gardener, we can guesstimate when this will be, we can observe and determine it needs to happen now but we can't predict over time with certainty.

Hyak's arguments is that much economic hypothesis is akin to a gardener trying to predict specific times when they will need to treat the crop for some pest infection.

But that fallacy does not mean the gardner has to be blind and cannot have an idea of what will happen, or the seasons of change or how the crop can be best managed - just not when in detail.

Oh, and like any gardener ... we also know when to leave it alone to do its own thing within certain boundaries.

A good gardener knows when to stimulate and when to stand back. They are both pro Hayek and pro Keynes.

I think you are taking a very reasoned approach, but unfortunately it assumes a logical Gardner capable of making rational decisions. In the political world to exercise the type of power that could impact markets and demand requires political power that only exists for brief moments in democracies. In general political parties and movements struggle to gain loyalty as the reasonable Gardner. Much better to promote a simple view, "Warer every day" or "we can't afford to water" as it is easier to sell. At some level, what this leads to is reaction based, primarily blind gardening that happens on a much to infrequent basis. A benevolent dictator might be the solution, but monetary policy is probably a decent trade off for political freedom.

By connecting to our QuickBooks Payroll Support Phone Number 1-833-325-0220 you can fix all kinds of QB payroll concerning troubles & issues in no time quite effectively from our competent and very experienced QB technicians.