I was recently asked to explain the difference between "cloud" computing and the earlier attempts to create an ASP (application service provider) industry. Is it just down to new technology? To understand the difference, we first need to get to grips with some of the fundamentals of change and what cloud computing is.

The fundamental forces behind change
Back in the 1990s, Paul Strassmann demonstrated that there was no link between IT spending and business value. Whilst there has been some argument over the validity of the research, Strassmann’s work created an idea which rapidly spread. This idea was that not all IT is the same, not all IT has value and some IT has commoditised.

However, what is commoditisation?

In its simplest terms, commoditisation (as opposed to commodification) is a neologism which describes how a rare and poorly understood innovation becomes well defined and ubiquitous in the eyes of the consumer. In other words, it’s a transition that describes how a once rare, exciting and new activity (an innovation) becomes commonplace, bland and standardised (more of a commodity).

The most often quoted example of commoditisation is the electricity industry and how this innovation led to the formation of national grids in the 1930s. Today, to most consumers, electricity is something you get from a plug and few companies describe their use of electricity as a source of innovation or a competitive advantage.

Whilst the journey from innovation to commodity has numerous stages (for example bespoke, product and services), this represents a continuous but hazardous transition of an activity to more ubiquity and better definition. There are numerous factors controlling the transition but for brevity I'll simply state that not all activities will commoditise, some have physical, social and other constraints. In figure 1, I've plotted business activities against axis of ubiquity (how common something is) and certainty (how well defined and understood something is).


Ubiquity vs Certainty for TVs, Telephones and VCRs.
(click on image for larger size) 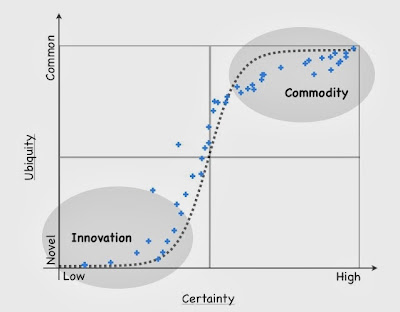 The data is derived from the TV, Radio and Phone industries however it suggests that an S-Curve relationship between the ubiquity and certainty of an activity exists. The graph shows a path for how a rare and poorly understood innovation becomes a common and well defined commodity.

All business activities are somewhere on that curve and all of them are moving, commoditisation never stops and IT activities are no exception. Figure 2 provides a hypothetical example of the activities within a business. 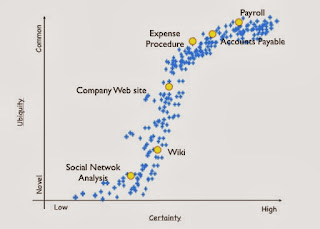 This graph is a representation and the highlighted points are not real data. The real path can only be determined after an activity has reached a certain level of commoditisation (in other words, I can't predict the future). You can however use pretty good expert reviews but that's another topic for another day. Since all the activities are connected, you can also expand this graph by looking at the linkages between components and how commoditised they are but that's also another topic for another day. I do however want to note that the journey of an innovation to ubiquity is not an easy one and some of the changes can be disruptive to an existing industry. This is especially true as any activity moves from the product to services stage of its journey.


Such a disruptive change is occurring in IT today. A quick glance at the current list of hot terms brings up subjects such as service oriented architecture, web services and mashing up services. All of these contain a strong service theme. The computing stack, which again for brevity I’ll characterise into three layers of application, platform and infrastructure is slowly shifting away from products towards standard components provided as internet services.

The last thing to note is that you have no choice when it comes to commoditisation. If you treat an activity as an innovation whilst everyone else uses standard services, then the only thing you are likely to create is a competitive disadvantage for yourself. This is why any company needs to continuously adapt to changes in the surrounding market just in order to retain its competitive position (the Red Queen Hypothesis).

In general, commoditisation is a continual process that can be be highly disruptive. You have to continuously adapt to this change and it is happening in IT today.

What is cloud computing?

Certain IT activities have become so common and so well defined that they are now suitable for service provision through volume operations. This is not confined to one particular layer of the computing stack but across all layers. This transition has given rises to the “as a Service” industry which includes :-
Supporting this transition is a range of technologies from clustering to virtualisation. In essence these have provided effective means of balancing the supply of computing resources to match the demand, a necessity for volume operations.


Whilst the concept of providing of computing resources through utility-like service providers dates back to John McCarthy in the 1960s, this idea began to sink into the fog of history shortly after. It resurfaced in the 1990s as it became the fashion to think of IT development as a factory-like process with standard components which could be plugged together to create new applications. With the development of  the internet,  a resurgence of interest in the concepts of utility-like service provision began. Unfortunately, many early attempts  were unsuccessful as they tried to apply such methods to activities that lacked both ubiquity and definition.  Increasingly as areas of IT have become common they have become more suitable for outsourcing to such providers. Managed hosting providers led this second wave of change and the new breed of volume operations specialists such as Amazon are leading this third wave.

In general the concepts of utility computing, this disruptive transition of the computing stack from a product to a service based economy, the growth of a new breed of volume operation specialists (the as a Service industry) and the underlying technologies supporting this change have been grouped together under the heading of cloud computing.

So how about ASP?

Well, ASP is part of the same overall process but as I said earlier many of the attempts focused on activities that were neither ubiquitous nor defined enough for such a volume operations approach. Others were more a a rental model for products. Today, this has changed. Cloud computing has less to do with a technological change and more to do with an environmental change in the wider IT economy.
Posted by swardley at 10:27 am