I was recently asked, "where is IT heading?"

Apparently, there seems to be a view that commoditisation will lead to the end of IT. Though it will certainly lead to changes and a shake-out in some of the practices and personnel, the idea that the end is nigh for IT is greatly exaggerated. Outside the support and training function, I would argue that IT is more likely to fragment into three different types of role.

One role, which I'll call the Pioneer, will focus on helping the business create new mashups, widgets and services to exploit the interactions between a common framework of services and information in the outside world. The expertise of such a role will be in experimental modelling and agile processes & novel business development. In my diagram (see figure 1), the pioneer's domain is in the innovation (think novel, first time) and the custom built sections of the activity graph.

Figure 1 - Stages of an Activity life-cycle.
(click on image for larger size) 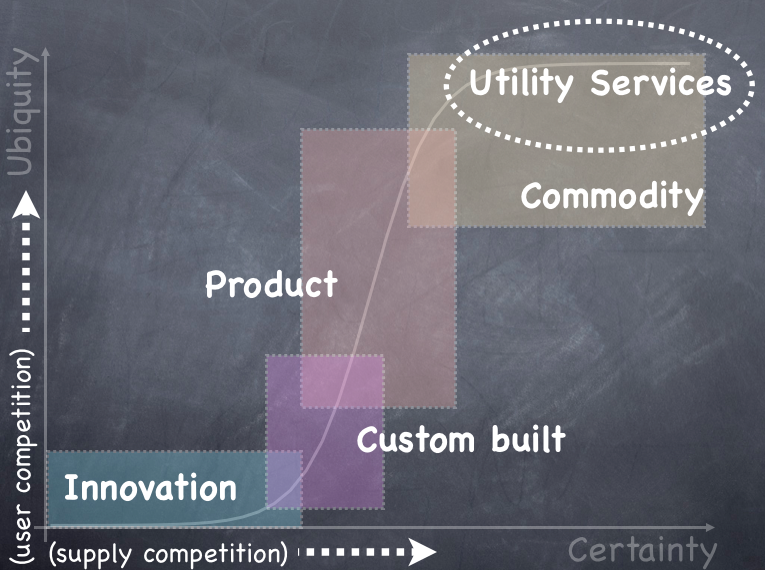 To gain an understanding of what this Enterprise Mash-up world will look like, I'd suggest following the writings of Dion Hinchcliffe

A second role, which I'll call the Coloniser, is probably the most demanding. Their focus will be on bridging the gap between the new innovations of the pioneers and the common framework of services upon which the organisation depends. The coloniser's job is to find, investigate and make the call on whether a new activity (an internal mash-up or process or an external one) should make the journey to be included in the framework, to start to turn those custom made things into products. Their world is in the minutiae of tactical decisions from open source to standards plays. Their focus is to gain as much advantage as possible from an activity that is becoming more common, whilst avoiding the dreaded cost of migrating to an alternative standard. They need to constantly decide which horse to back and to understand the future potential consequences in a world of tactical play and misdirection. In my diagram, their domain is the product (transitional) section of the activity graph.

The final role, which I'll call the Town Planner, will be focused on managing componentisation, outsourcing and providing the framework for all common processes and services that a business uses. The expertise of such role will include service orientated architecture (SOA), enterprise architecture (EA), business process modelling (BPM), six sigma, volume operations, software as a service (SaaS), contract negotiations, risk & security management, compliance and all the activities we associate with a well ordered world. In my diagram, the town planner's domain is in the commodity section of the activity graph.

So, will commoditisation lead to the end of IT? No, IT is only starting to get interesting. However it will cause a big shake-up and the army of half-competents who hide behind the obscurity of today's "complex" systems will find themselves butt bare naked in a world where a cold wind of change blows.

If you make your living around telling business that ERP / CRM or any of such ilk are a source of competitive advantage, you're wearing the Emperor's new clothes and you'd better find some real ones.

It's over six years later and ... we're slowly starting to see the signs of change in organisations. I estimate it'll take another 10-15 years after the first major move which probably puts this around 2030. The most recent set of organisation changes mainly involved cell based structures. This more adaptive structure is still a long way off.

The original image link was broken, thanks for pointing that out. I used the same image from another blog post to replace. If you find other broken links, do tell me. I keep all my old presentations and can go back to source.

Slowly we're starting to see more public discussion on the spread of cell based structures and also structures that combine not only aptitude but attitude e.g. the three party system of the hybrid dynamic model. We've probably got a good decade to go before this start becoming more noticeable. Alas, we've also got a resurgence of a dual operating system model which to be honest I thought was dead and buried long ago. A dangerous space to be, re-invoking those images of Elois and Morlocks. Been there, done that, bought the flares, wish I hadn't, not doing it again.
Posted by swardley at 11:50 am