Is my diagram a map?

Let us take a systems map 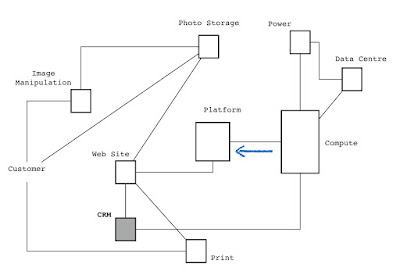 It is visual and context specific (being a system diagram of an online photo service and not a self driving car). It has components and the relationship between components. We also have the flow of information (blue line) between components. But does this make it a map? I've shaded one box (CRM) in grey and moved it. 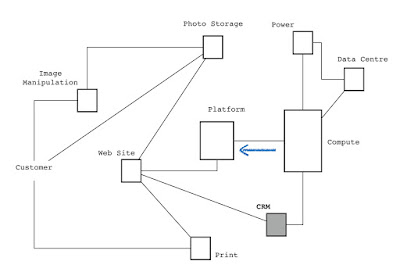 The components and the relationship remain the same. It's still visual, it's still context specific specific and nothing alters with flow. The diagram is in essence identical but yet I've moved a box. Let us compare this with a road map of major roads in the UK. 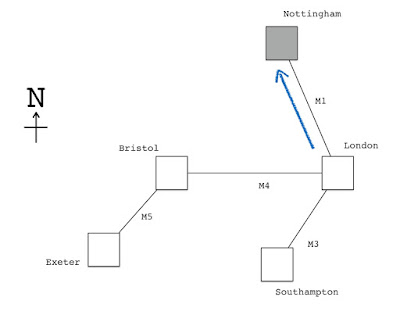 It's visual and it's context specific (being the UK not France). The diagram has components, relationships between them and also flow (e.g. the movement of traffic). But it has more than this. The compass acts as an anchor, the components have position relative to each other (London is North East of Southhampton) and we have a concept of movement. If I wanted to walk from London to Exeter (not travelling along the major road) then I could head South South West (roughy). The diagram is not very accurate, it lacks scale but is this a map? Let us move the component I've marked in grey (Nottingham). 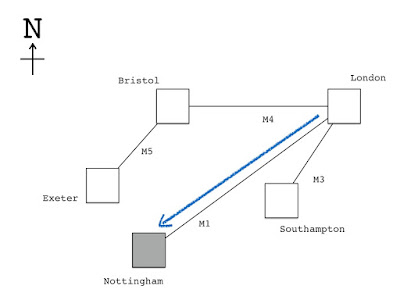 By moving the component I've fundamentally changed the meaning of the map. Nottingham is no longer North of London but SSW of London which of course, a quick flight across the territory will tell you is wrong. The map (and this diagram is a map) helps you explore the territory. It does so because it has the characteristics of navigation e.g. anchor, position and movement. Without such characteristics you cannot learn about the territory.

Whilst the road map is a map, the systems map is in fact not a map. It lacks those navigational characteristics which enable us to learn about the territory. We might call it a map, in the same way I might call myself a Jedi but it's not the name but the characteristics that define what something is. I still lack the powers of the force no matter how many times I tell myself that I am a Jedi.

A map must be visual and context specific. It must have components but more than this it requires an anchor, position and movement. The quickest way I know to determine if something is a map or not is to move a component (i.e. use movement) and see if this changes the meaning of what is being looked at. If it doesn't then it's not a map and hence it is of little use for learning about a space.

Almost everything we call a map in business - systems maps, business process maps, mind maps, digital maps, product road maps, strategy maps - are not in fact maps. They are diagrams.  If you want to map a business then I've written the best part of a book (all creative commons) on how to actually do this.