Strategy, Plans and World of Warcraft.

Your plan is your general direction of travel and what you intend to achieve. It describes the goal and your purpose for a mission whether you "plan to win the war" or "plan to take a building". 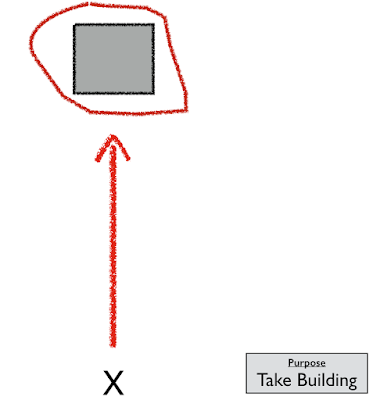 The battle (whether military or in business) will occur in a landscape. You can choose to consider that landscape or ignore it. The effects of this can be best seen in an online game such as World of Warcraft in the battlegrounds. Often you'll have two teams - one consisting of newbies who run around the landscape because they are lost and uncoordinated and one which isn't. The result ... well, it's a bit one sided with the newbies often blaming the equipment of the other players and each other rather than their lack of competence as a team. 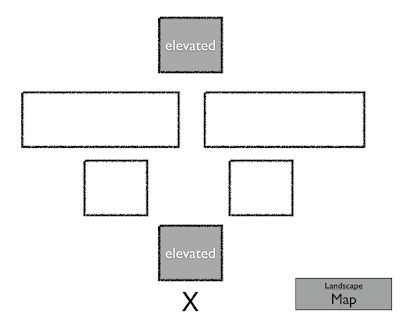 You now have to decide how to play the game. One of the benefits of mapping a landscape is it not only provides you a mechanism to communicate strategy and challenge assumptions but also to learn from past engagements. We can use our past experiences to determine context specific play i.e. how to deal with the game in hand. In this case, we'll go for a ground assault with some element of suppression fire. 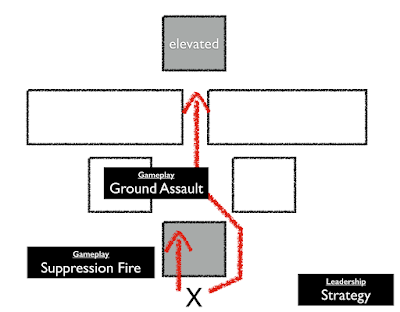 Of course, that's the strategy (i.e. part of our plan) and we now have to implement this i.e. put it into effect. This is the operation itself and for this we'll normally apply common forms of universal doctrine. In the above case, breaking into two small autonomous teams is apt. 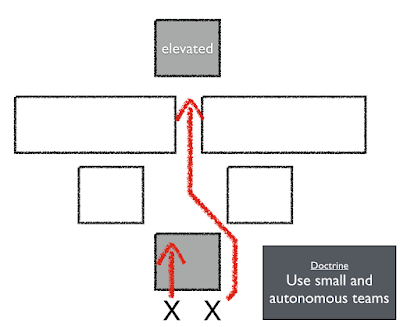 So now we act, we're into the game itself. Ideally the speed at which we move from the general plan (take the building) to understanding the landscape to the strategy to operation should be lightning fast. In an online game like World of Warcraft then such choices should be made in seconds which is why you need a well trained, co-ordinated group. In business then the pace is a lot slower, so you can afford to give yourself a day or two. Unfortunately most take many months by which time the landscape and game has changed and yet they still continue to pursue the original strategy. For many that works because you're competing against others who are equally slow and have equally poor understanding of the landscape i.e. it's ok to suck as long as everyone else does - ask newbies, they only start moaning when they come up against a well trained group and get spanked.

Of course, as soon as we play the game then we can experience climatic changes i.e. changes to the environment because of economic effects or competitor actions. In the case of our "take the building" plan then we suddenly find ourselves under fire. At this point, doctrine again should kick in which is why we do so much training. There isn't time to immediately create a new strategy, you need to be able to react to the situation. In our case, one group returns fire, the other seeks safety. 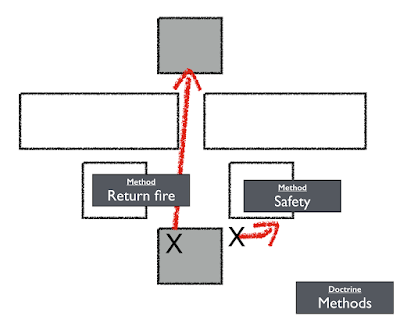 Now, our plan of taking the building hasn't changed but our landscape needs to be updated with the presence of a sniper. A new strategy is quickly formed, we organise around it and move. The maps are used to communicate to everyone the play at hand. 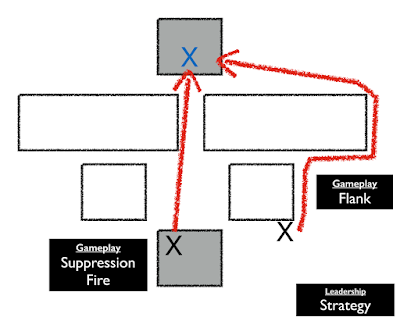 This is what strategy should be, a constantly iterating process of observing the landscape, orientating around it and acting. The plan is not some checkbox list but a general direction with fluid strategy and movement. It's an adaptive cycle. 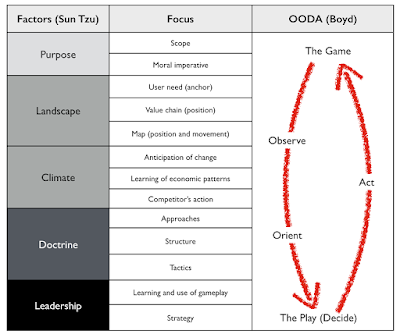 But most companies (and I do mean most as in the overwhelming majority) have no understanding of their landscape. They have no mechanism of communicating strategic play, no mechanism of learning and no way of determining context specific techniques from doctrine. The overwhelming majority are like the newbies charging into the battlefield of a World of Warcraft game. They have a purpose and a plan (what they call the why) as in "Win the game" and then vague hand waving aspirations of how to do this. Sometimes they get lucky.

Of course when they lose, it's all about the "equipment" or other excuses i.e. their people, their culture, the lack of execution or how the plan was wrong but the strategy was right etc. It's almost never about the fact that they had no strategy or anything worthy of the name. Alas, if you don't understand the landscape then you can never learn climatic patterns or doctrine, you're simply jumping from purpose to hand waving and statements like "it's all about the Why". 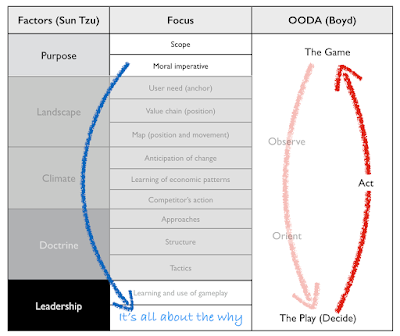 I've seen billions wasted by companies cluelessly charging into battles that they have no hope of winning because they do not understand the landscape. I've seen endless SWOT diagrams, stories and other magic thinking used to justify such actions. I've seen companies tear apart industries with a modicum of situational awareness.

I'm now a great believer that all executives (with a non military background) should spend three months playing World of Warcraft before being given a position of responsibility in order to learn about team play, situational awareness, adaptive responses and so forth. If you can't learn the basics in such an environment then you shouldn't be let lose on a company with real people.