It has all gone a bit Wardley here

I've just been asked who invented the technique I use for mapping organisations. Hmmm ... Me! Back in 2005 (with a bit of help from James Duncan). One of the first maps I created was Fotango (see figure 1). 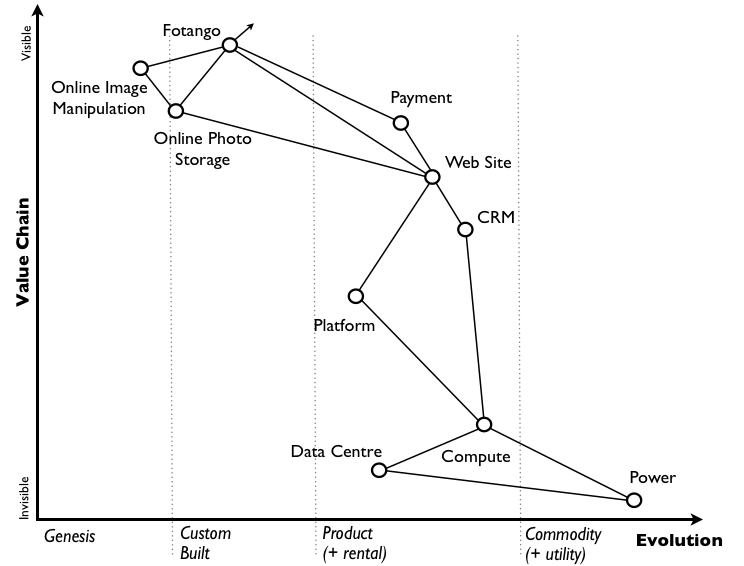 It's based upon two axis - a value chain of needs and one for evolution. Anyway, from now on please call them Wardley Maps. I'm getting tired of people asking me who invented this technique and so I'd much prefer people to ask me 'Who invented Wardley Maps?' and then I can say ... go on, guess.

Also the evolution bit was a pattern I first noticed in 2004 and then managed to confirm in 2007 by plotting out ubiquity vs certainty of a large number of different activities. So from now, please call this Wardley Evolution so I don't have people coming up to me and asking where did I get that evolution curve from. 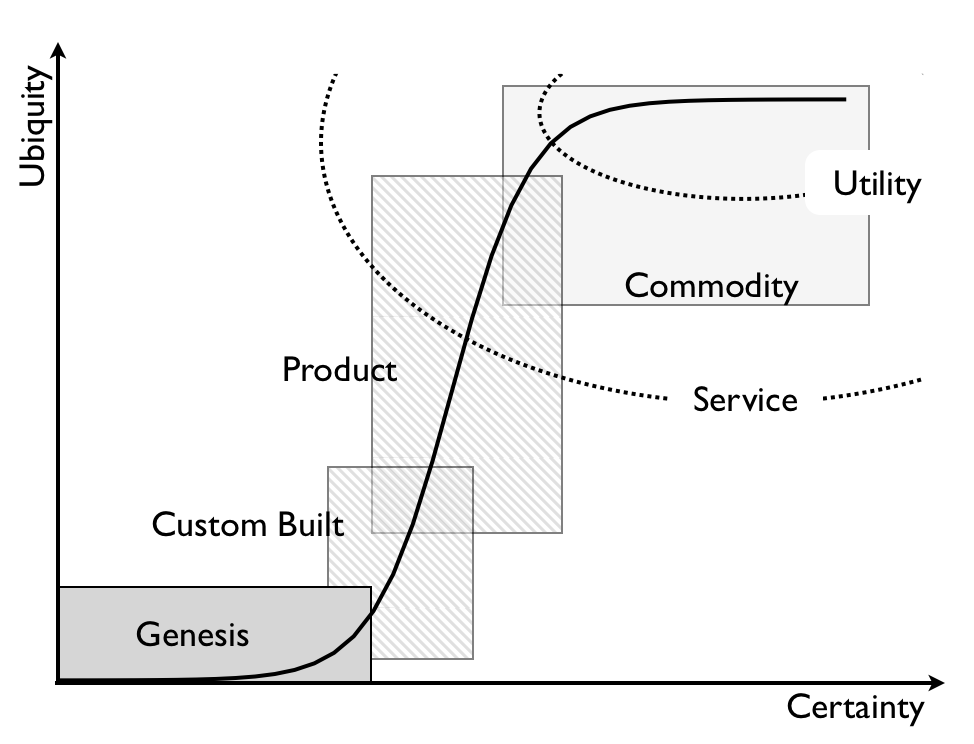 Again this is to stop people (especially consultants and academics) asking me who invented / discovered / created it - I did! Me! I'm the person who put in all the effort to catalogue this stuff.

Figure 3 - Properties of a Wardley Map 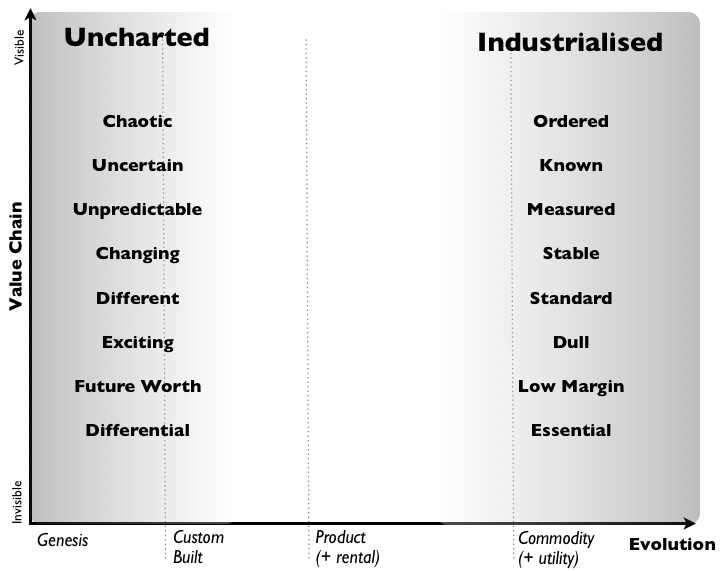 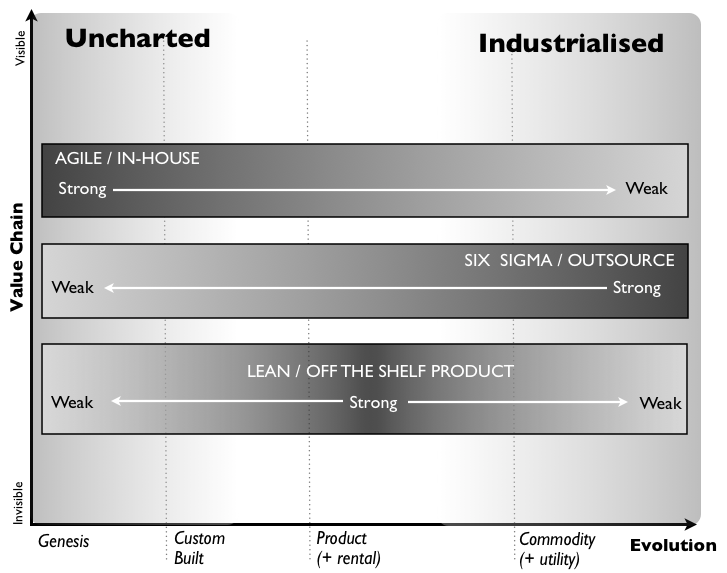 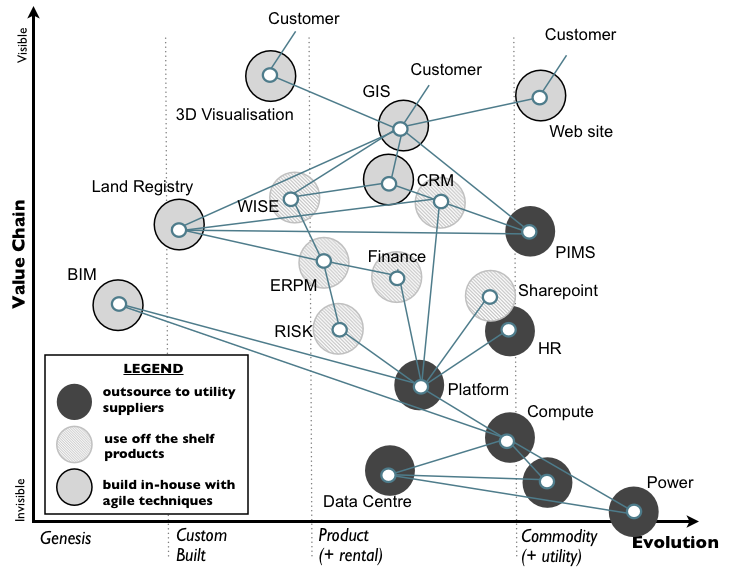 Whilst we're at it, here's the bit about counting frequency of activities and determining a profile for an organisation and flow (circa 2009) - let's call that a Wardley Profile (see figure 6) 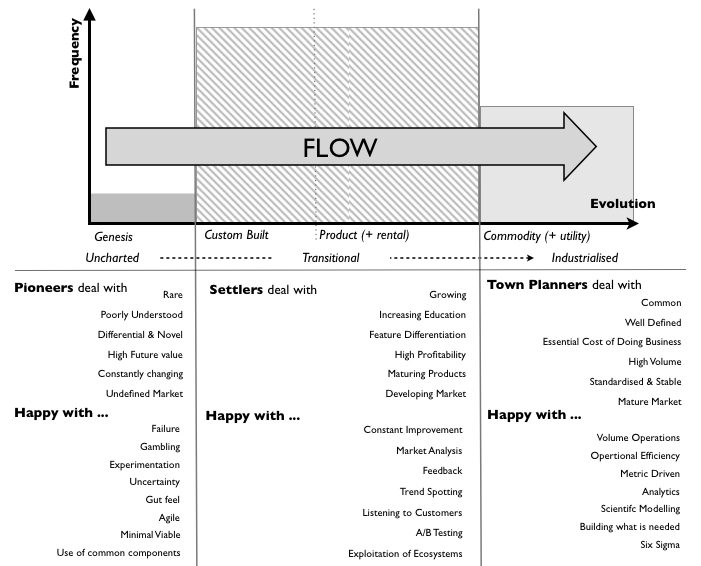 Which was used to explain why the Pioneer, Settler and Town Planner structure (which was implemented circa 2005) works. Oh, we may as well call that Wardley organisation. 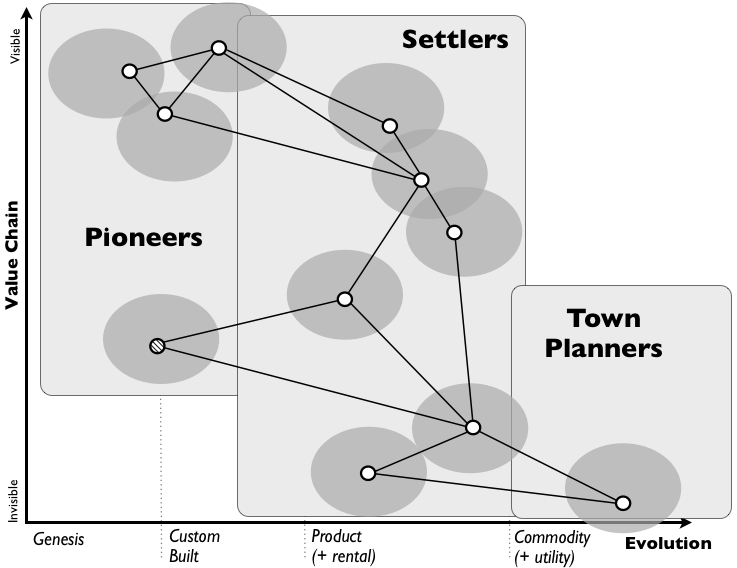 Then there's many dozens of economic patterns, tactical plays, ecosystem patterns and strategic games which have been described from punctuated equilibriums to inertia to ILC to how new organisations form to how major economic waves occur (circa 2007-2011) - we can call that Wardley economics.

Alternatively you can drop the Wardley term for methods, properties, economics, profile, organisation and evolution as long as you cite where you got the stuff from (i.e me) and don't ask me dumb questions like 'where did I get this stuff from?' ... me, me, me! Who do you think put the work in and collected the data? Oh, I know I should finish the book but alas work gets in the way.

I provide this blog and this work under creation commons attribution share alike to enable other people to use it, not to be airbrushed out of the picture. It's my way of contributing back but I've got no problem with crucifying people online who simply help themselves to my work and don't cite the source. Just simply add 'Courtesy of Simon Wardley' and I won't grumble at you.

You can guess, someone has really annoyed me.