One of the mantras of mapping is no consultants. The reason for this is fairly simple. When you look at a map of a landscape then the precision of where the components are on the evolution axis increases from left to right (see figure 1). 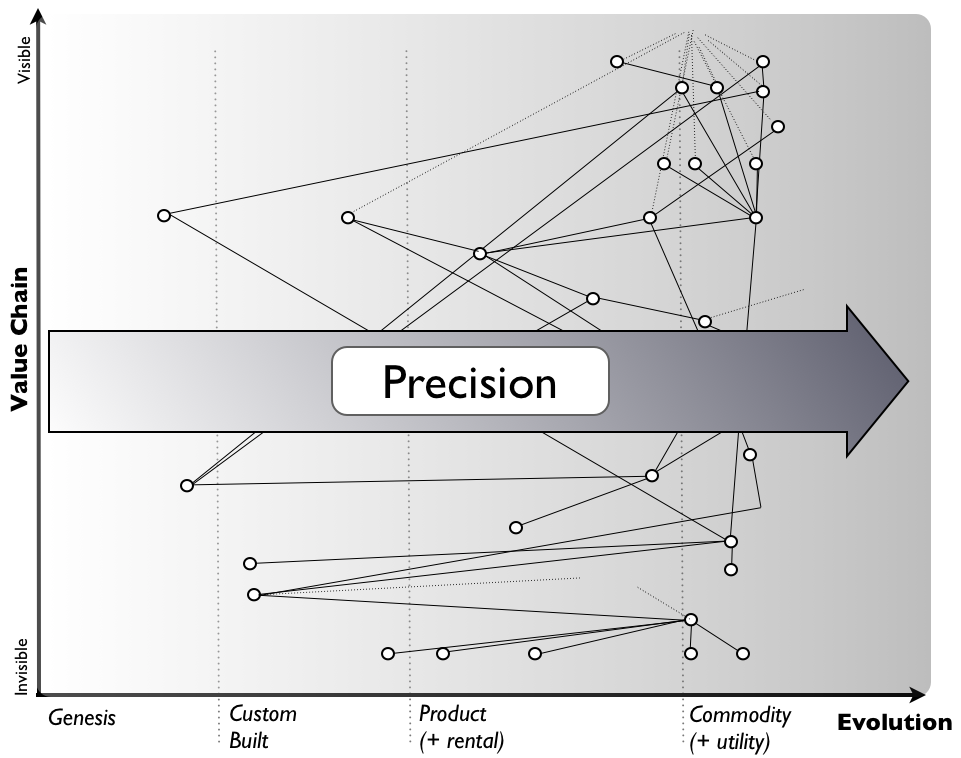 The reason for this is evolution is determined by ubiquity versus certainty and you can't determine where something precisely is on a certainty axis if the act is uncertain. Many years ago, I used this to deconstruct Gartner's hype cycle and demonstrate that it couldn't be built from physical measurement but was most likely built from aggregated consultant opinion. Sorry if I've popped a bubble there and you thought the Gartner hype cycle was some form of science based physical measurement rather than opinion. This of course doesn't mean it isn't useful but it's purely a perception.

Anyway, the way you resolve this issue of precision is to use the work of the Marquis De Condorcet (1785) commonly referred to the wisdom of the crowd. Under this work then if each member of a voting group is more likely than not to make a correct decision, the probability that the highest vote of the group is the correct decision increases as the number of members of the group increases. This means you need two things when mapping. Firstly, a reasonably sized group of people to create the map and secondly all of those people to work within the business and hence more likely than not to provide a more precise approximation of how evolved something is.

Naturally, it might be precisely wrong. There are biases and you have to be careful to watch for these. However, the point that I want to make clear is that when mapping an environment (along with the strategic play that follows) then outside help is generally useless if not worse than useless. Yes, those House of Lies facsimiles really aren't worth the paper they're printed on. The exception to outside help is of course when making comparison to other groups in order to identify and remove any bias you might have. But then all you need is the maps of the other group (and they benefit from your sharing) and not some smiling suited clone who will empty your bank account.

Yes, there are opportunities to create aggregated data services but just to re-iterate:-

The only people who can map an organisation are those working in the organisation. Strategy consultants can't help you here.

Maps are dynamic and constantly changing. Whilst there are common economic patterns and play, you have to react the field of competition constantly adapting strategic play and executing accordingly. The people running the organisation are the ones playing the game of chess, you can't outsource this to a bunch of strategy consultants either.

The best you can get from a bunch of strategy consultants is maybe some gameplay from other industries which you can apply to yours or some systems for weak signal detection. For the latter there are great companies like Quid and Palantir. Unfortunately for the former, understanding strategic gameplay requires a good level of situational awareness and the ability to apply any patterns to the context that your business is in. Strategy consultancy firms I've met tend to suck at this.

If you don't know, I'm not a fan of Strategy Consultancy firms. Those that I've met are a complete waste of time and money in my opinion.

My form of mapping is creative commons share alike. This means anyone can use it without paying some license fee. All that is required is your time and effort. An introduction into how to map can be found here.