On mapping - some help needed.

I spend a great deal of time teaching people how to map the commercial landscape and exploit this to their advantage. An example map is provided in figure 1. 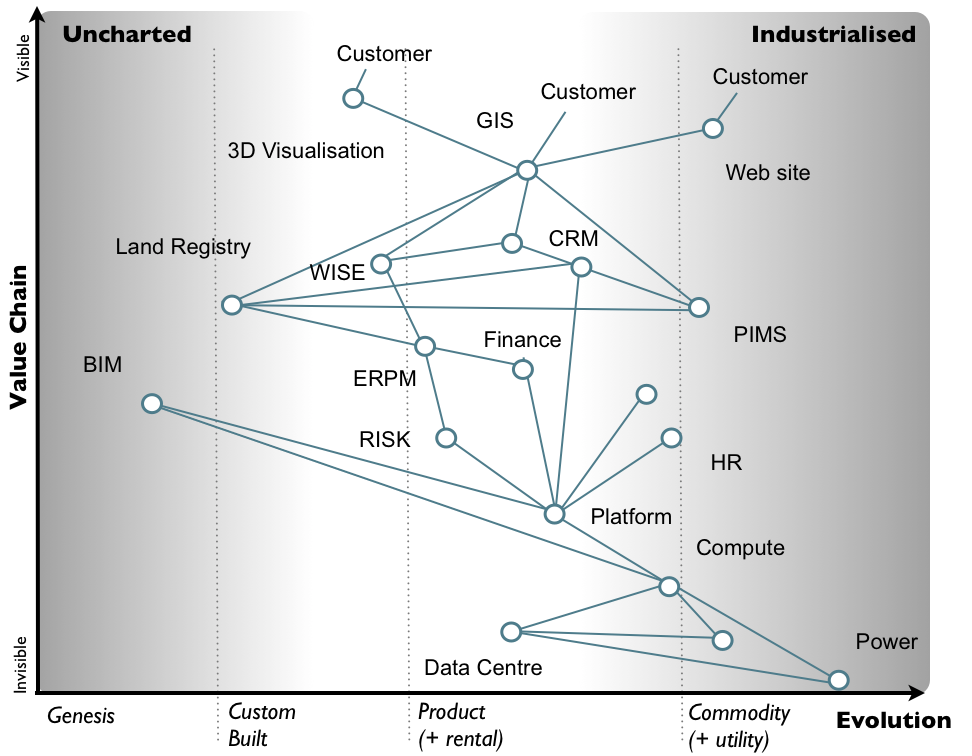 The process of mapping I've explained elsewhere but in principle - you start from user needs then you explain the value chain that meets those needs in terms of components and then you determine how evolved each of those components are. Maps are incredibly useful for determining how you should manage something, finding areas of inefficiency and strategic gameplay but that's not the point of this post (for more details on mapping the LEF has a video etc).

The axis at the bottom of a map is evolution and it describes a common pathway for how any activity, practice or data evolves from an uncharted and highly uncertain space to a more industrialised form. The path of evolution is described in figure 2. 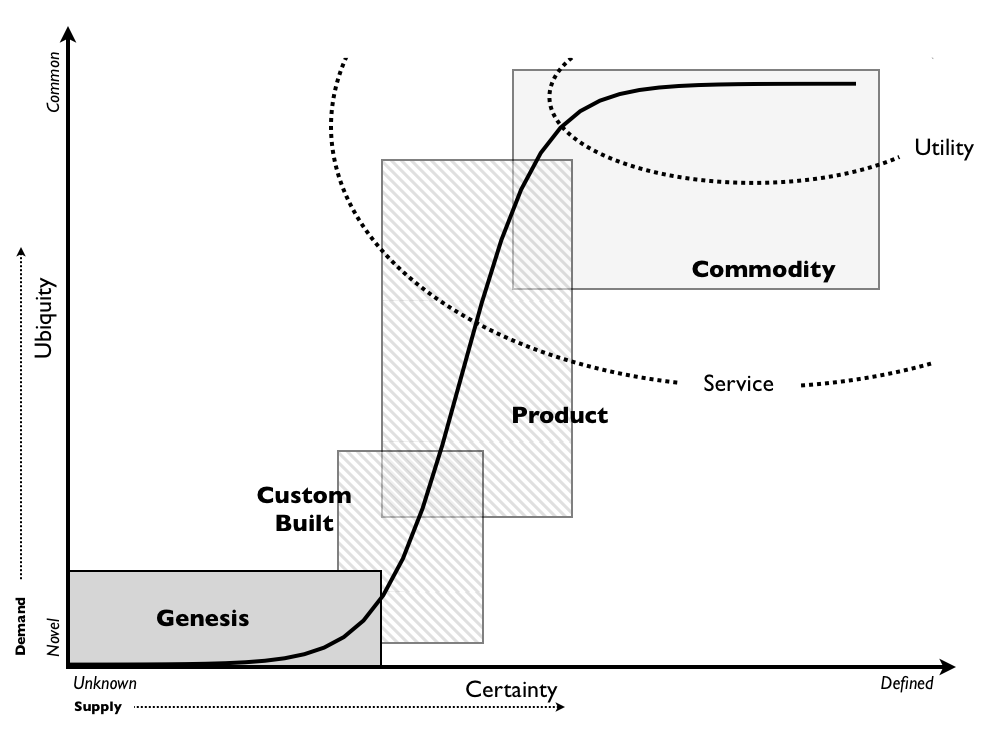 Now, evolution is not the same as diffusion (a time based examination of adoption) but instead derived from supply and demand side competition. It cannot be measured over time due to an uncertainty barrier known as the 'future' and the impossibility of predicting individual actors actions.

However, there is a link between diffusion and evolution. For example, some actor will create a new activity, others will copy with custom built examples that diffuse, others will introduce products with diffusion of continually improving versions in the market until some actor introduces a commodity variety that will then diffuse. In each case adoption will be through a larger market and each variant (improved product etc) will increase certainty (i.e. maturity, feature completeness) of the act.

A single line of evolution can consist of hundreds if not thousands of diffused examples of that activity and that evolution can take considerable time. For example if you consider the evolution of electricity, the nut and bolt and computing then you have a common pathway but over significantly different time scales :-

Electricity
The history of electrical power generation can be traced from its genesis with the Parthian battery (around 200AD) to custom-built examples of generators such as the Hippolyte Pixii (1832) to the first products such as Siemens Generators (1866) to Westinghouse’s utility provision of AC electricity (1886) and the subsequent standardisation of electricity provision from the introduction of the first standard plugs and sockets to standards for transmission and the formation of national grids (UK National Grid, 1926).

Nut and Bolt
The genesis of the humble screw can be traced back to Archytas of Tarentum (400 BC). The principle was later refined by Archimedes and also used to construct devices to raise water.  Over the next two thousand years most screws (and any associated bolts) were cut by hand however demand for screw threads and fasteners created increasing pressure for a more industrialised process.  J and W Wyatt had patented such a concept in 1760 and Jesse Ramsden in 1770 introduced the first  form of screw cutting lathe.  However without a practical means of achieving industrialisation and with no standards then the industry continued primarily as was.  Maudslay then introduced the first industrially practical screw-cutting lathe in 1800 that combined elements such as the slide rest, change gears and lead-screw to achieve the effect.  However, whilst screws and bolts could be manufactured with inter-changeable components, the lack of any standards thwarted general inter-changeability. In 1841, James Whitworth collected a large number of samples from British manufacturers and proposed a set of standards including the angle of thread and threads per inches. The proposals became standard practice in 1860 and a highly standardised and industrialised sector developed that we recognise today.

Computing
The history of modern computing infrastructure can be traced from its genesis with the Z3 computer (1943) to custom built examples such as LEO or Lyons Electronic Office (1949) to the first products such as IBM 650 (1953) to rental services such as Tymshare (1964) to commodity provision of computing infrastructure and more recently utility provision with Amazon EC2 (2006).

The vast differences in timescale are in fact related to the evolution of the means of communication but that is a different story to this post.

I first described the pattern of evolution above at a talk at EuroFoo in 2004. I then collected a set of examples in 2005. However, it wasn't until 2007 that I was able to collect around 4,096 data points to propose that evolution was something more than just a nice idea and could actually be described as a weak hypothesis.

The pattern of evolution is based upon the properties of the component in question and the type of publications that surround it.  Table 1 provides a description of this and the terms I use for different classes of components such as activities, practices and data. For completeness I've also added the old terms I used to use. 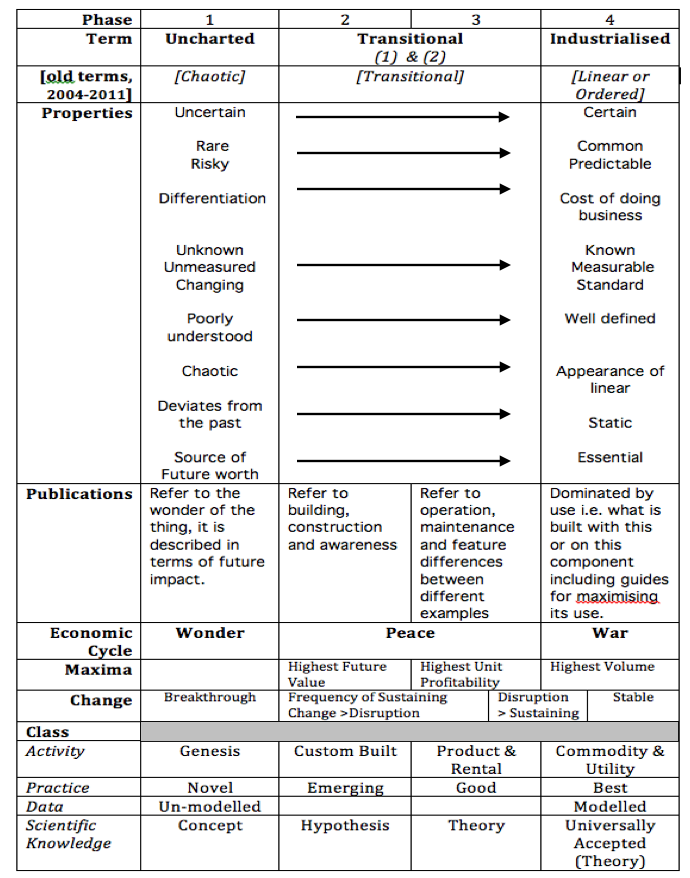 Now, it should be noted that when mapping an environment the components not only evolve due to competition but can also co-evolve. Most common examples of this are practices with activities. For example, best practice in a product world is not the same as best practice in a utility world.

The use of this pattern of evolution has been essential for me in not only mapping and strategic gameplay but determining the fundamental patterns of economic change, how organisations evolve, mechanisms for exploiting ecosystem, how to use open as a competitive weapon and the cycles of our economy. However, again this is not the purpose of the post.

In table 1, under the class of data I have two labels - un-modelled for the uncharted and modelled for the industrialised. I have not been able to determine suitable labels for the transitional phases. You can see the properties above and examples for practice and activity class.

Hence, I'm looking for suggestions for the two labels.