Now you have a map, you can start to look at how to manipulate the environment to your advantage. This is the essence of what strategy should be about.

To start with, I’ll use an example - the Fotango Map (Figure 53) – and explain why we took the actions we did, then we will look at the subject more broadly. I'm often asked why do I use that example, well because the company is now dead (killed by the parent rather than through its own failure of strategy) and so it's ok to talk about the games it played. I don't generally talk about active companies. 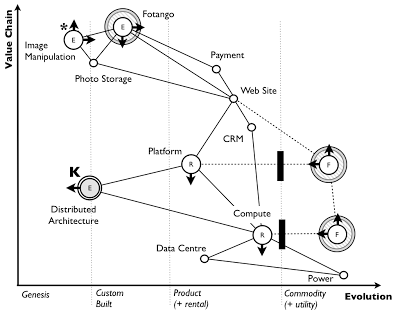 The company’s service (online photo storage) was shifting to relative competition with players becoming established. We were losing that battle because we had to focus internally on the parent company needs and lacked the investment. Alternative services such as Flickr were rapidly dominating the space.

Our differential was in image manipulation but being uncertain we had no way of foretelling its future. We certainly were unable to predict the rise of Facebook and Instagram and what would happen, this was 2005. We also knew our existing business of meeting our patent company’s need was to be outsourced.

The platform and infrastructure plays looked the best option due to established markets and inertia that incumbents had, as both were suitable for utility provision. Infrastructure was capital intensive and we could assume that some other new entrant would play the game, so we could build a PaaS and exploit IaaS as it developed. However, it was probable that an IaaS play would develop a strong ecosystem and we would see centralization, hence to strengthen our position we planned to open source all our IaaS technology in 2007 to encourage a competitive market.

The PaaS play also suited us because the skills to build large-scale distributed architectures to support it would be scarce and a barrier to entry. We had that capability.

By open sourcing the PaaS technology itself we would overcome many of the adoption barriers and rapidly drive towards creating a standard. Our goal was not to be a PaaS provider ultimately but to build the exchange, brokerage and assurance industries on top of this. Our strategy was developed from the above map and our understanding of it. The strategy was all about the why with the how, what and when coming after.

There are multiple ways of using maps to gain an advantage. You can use a map to see how components can be combined to create new activities (i.e. genesis) but I tend to avoid this. Genesis is a high risk and uncertain activity hence it is better to get others to do this for you and to exploit an ecosystem under a model like ILC.

You can also look at links within the value chain. For example take something as trivial as a desktop role out. You might find that you’re forced to treat the operating system as more of a product than a commodity because of some link to another component (such as a line of business app). By forcing the app into a browser you can often treat wide numbers of components as a commodity.

My preferred technique though, is to take advantage of competition driving any component to a more evolved state (i.e. more of a commodity or a utility).  Hence I tend to look at those components that are put down as being in the product stage especially those that are put close to being a commodity and ask the question “Is this suitable for commodity provision?”

You can check by looking at the market for weak signals such as consumers questioning why this thing costs so much. Take financial ERP, the constant business grumble combined with its ubiquity tells you one thing - it's ready for the game. Components that are consumed as products and which are suitable for provision as a commodity specifically via utility services are a gold mine.

One of my favourite ways of double checking this is when we identify such an opportunity then to ask a group of people familiar with the subject to pretend we have built such a service and what we need them to do is to write the press release. If they can do this well - clearly and precisely – and without recourse to heavy investigation of the opportunity, we can be pretty sure we’ve got something widespread and ubiquitous enough to be suitable.

You should then aim to create new services with ecosystems around them. You can be fairly confident that existing players will have inertia and won’t see the expected change coming (the shift from peace to war) and if your service can become a component of higher order systems then you can benefit from volume effects.  These are huge opportunities which if you’ve been consuming the product you’ve probably built some of the necessary skills to make happen – as was the case with Fotango and platforms.

Obviously at this time people can raise the notion of focusing on core (as happened with Fotango's parent). Unfortunately maps don’t solve internal politics but generally these days I point to Amazon and say, go explain to them that they should have stuck to selling books online.  Amazon is without doubt my favourite example of a company that commoditizes existing industries through building ecosystems and utility based platforms. They’ve repeated this model successfully in industry after industry.

The process of building maps should provide you with a fairly hefty list of target opportunities, areas of efficiency and shared components. Once you’ve added the details (differentials, forces and barriers to entry) you can then start to look at manipulating the environment and creating new advantages.

From this you can decide where you’re going to attack and where you’re going to try and protect. You can now start applying tools to help make this happen e.g. use of open technologies to drive something to a more evolved state or any of the dark protective arts such as branding, IP or legislation to protect a barrier to entry or to slow a change.

For example, if I want to drive a component to more of a commodity but I don’t want to build my own service in that space, I might simply use open source to do this.

Or instead, if I have data on travel habits but want to create an ecosystem (so other companies can innovate for me) or to undermine some competitor business by destroying an area of value, I might create an open data service for aggregated market data (i.e. how many times do people travel from one destination to another).

There is a long list of techniques here and I’ll cover some defensive and attacking strategies in the next section but the point is once you have the maps, it becomes a lot easier to see the potential games and to explain why you’re going to do something.

Once you start getting competent at doing this, you can also start to turn your attention to competitors. Even if they don’t have maps, there is nothing preventing you from creating them. Examining their value chains can often highlight potential points of weakness.

For example, any half decent strategist with a map would have seen the shift of computing infrastructure from product to utility services almost a decade ago. If you were a hardware provider of computing products (e.g. servers) you would have known it was coming along with the inertia you would have to the change. You could have prepared for this well in advance.

When the market signals were shouting for the change, you should have been on watch, building highly efficient and commoditized data centres but selling them as high cost rental services along with your products (thereby extracting maximum value in the peace phase of competition).

When the new entrant appeared i.e. Amazon launched EC2, you would be prepared to hit the market fast. Within a year of launch, once it was clear that the change was growing you could have announced a massive utility investment and reveal your new services (i.e. selling those highly efficient but high cost rental services as utility services).

Your goal would have been simple, flood the market with volume at low cost and stimulate demand. The reason for this is that you would know, if you had a map, that your competitor would have to build data centres to meet the demand and this is both capital expensive and time consuming (a bottleneck).

Since computing resources has been elastic for the last forty years, stimulating demand beyond your competitor’s ability to supply is an excellent way of fragmenting a market. You could let them led the way for the first year and then swamp the market. By 2009 this market should have been very different with Amazon being a minority player.

What happened of course was deafening silence, as the competitors were unprepared. Many have huge rental services, excellent skills along with large capital reserves but they failed to react to an expected market change. Certainly they would have inertia to the change that would have become embedded in their culture but this could have been managed. Disruption by expected and predictable market change is unfortunately quite common.

The game of strategy is all about preparation, creating an advantage and situational awareness.  In the next sections I’ll look at common defensive and attacking strategies.

Next post in series ... Attack, Defend and the Dark Arts