Last year at OSCON, I examined mechanisms by which a company could use technology evolution to disrupt an existing player with minimal fear of retaliation. To quote myself :-

"it's the incumbents existing model which will protect you"

This year at OSCON, I'll be giving a three hour tutorial which will explore the entire subject of organisational warfare in far more detail. To give a taster of what is to come, I thought I'd expand upon some of the reasonings behind the above statement.

Anyone who has been following my public presentations over the last seven years or has been exposed to my exploration of this subject over the last decade+ will be well versed in much of this practice. For those uninitiated in this field, I'll start with some basics.

All business activities evolve through a common lifecycle and Cloud Computing is simply an example of this. Unfortunately, whilst we know how things will change, we cannot say when. The pattern of evolution is independent of time which is why the lifecycle graphs that I use have no time axis. But then they could never have a time axis, the future is an information barrier we cannot see past.

Fortunately, there are also barriers to the process of evolution and these give us a sense of when things will happen. In order for an activity to evolve from the domain of products to that of utility services then the following four factors are required - concept, suitability, technology and change in attitude. These factors are our "clue" that change will happen.

So we can predict how things will change, just not when - at least not with any great accuracy.

As any business activity evolves along its lifecycle its characteristics change from more chaotic (e.g. appearance of constantly changing, highly uncertain) to more linear (e.g. appearance of being defined, predictable, measurable). Using this change of characteristics we can develop organisational models which cope with evolution. An example of this is the Innovate-Leverage-Commoditise (ILC) pattern which can be found with many cloud companies.

So we can predict what will happen and though we can't predict precisely when, we can design an organisation around evolution.

There are two tactical plays that I'd like to discuss which can be used in such an environment. The first is around creative leadership, think Steve Jobs' Apple. The other is around disruptive leadership for which the best example would probably be Amazon.

Amazon is a company which rarely seems to create a new activity but instead specialises in commoditising activities and disrupting existing players. Infrastructure existed before EC2, book distributors existed before Amazon.com and the paperback existed well before the kindle. Amazon is extremely good at the disruption game.

To illustrate this disruption play further, figure 1 provides a rough tactical map of Salesforce. Whilst the incumbents are firmly entrenched in the product world for provision of CRM (& sales automation), Salesforce has commoditised this activity through provision of a standardised service. It also appears to be operating an ILC pattern i.e. core services around which a growing ecosystem is used to encourage innovation and identify new successful patterns which are then subsequently commoditised to core services - hence innovate, leverage and commoditise. This model is little different from Amazon's play in the infrastructure space. 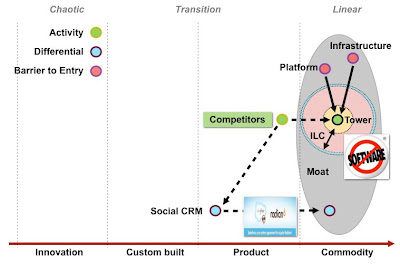 On closer inspection, Salesforce seems to be doing more than just commoditisation with an ILC pattern, as can be clearly seen from Radian's 6 acquisition. They also seem to be operating a tower and moat strategy, i.e. creating a tower of revenue (the service) around which is built a moat devoid of differential value with high barriers to entry. When their competitors finally wake up and realise that the future world of CRM is in this service space, they'll discover a new player dominating this space who has not only removed many of the opportunities to differentiate (e.g. social CRM, mobile CRM) but built a large ecosystem that creates high rates of new innovation. This should be a fairly fatal combination.

But, how is Salesforce able to get away with this? Why was it that Amazon and not a hosting company created this future world of infrastructure provision? The answer would appear to be … inertia.

The existing players in the CRM world are stifled by their very own success in the product world. This past success creates an inertia barrier to change. Whilst the causes of the inertia barrier can be traced back to the early stages of a companies formation, by the time a company is of a reasonable size it is often embedded in the organisation, culture and reinforced by external financial markets. Figure 2 provides an overview of this.

Figure 2 - Causes of Inertia (click on image for higher resolution) 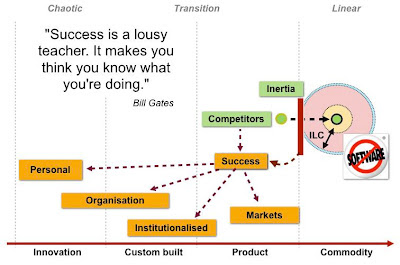 So, back to the question about Microsoft. Whilst Microsoft is now making some strong moves into the service world, the problem for MSFT is this space is being even more aggressively commoditised through open plays. Whether it's VMware's necessary play into open source platform with CloudFoundry or the Openstack attempt to out-commoditise Amazon's out-commoditising of the existing industry.

Both efforts attempt to exploit the natural end state for ubiquitous and well defined IT activities i.e. good enough components provided through a marketplace of providers based upon common open source reference models. Both efforts will seek to create higher order revenue streams such as assurance, exchange, marketplaces and brokers alongside the normal business of being a service provider.

Whilst MSFT has made much of a fanfare about its recent moves into the cloud, it was a probably a significant internal battle for MSFT just to make the change from products to services. However, this new world is likely to be rapidly commoditised to marketplaces based around open source and hence the real question becomes whether MSFT will be able to make the further change necessary to survive in that world?

Microsoft's future business should be intertwined with open source in the domain of utility services. Unfortunately, the last group of people who are usually willing to accept such a change are those who have built careers in the previous domain e.g. products. The bad news for Microsoft is that group probably includes a large chunk of its own organisation. Hence Microsoft itself is probably its own greatest threat to future survival.

Or as the great Bill Gates once noted:-
"Success is a lousy teacher."

That's one of those basic lessons which often gets forgotten in business. In this world of competition, there are two fronts to fight on. The external front includes those competitors who attempt to either gain a creative leadership position or to disrupt your existing model. The other front is internal and against your own past success.

Which is why in my latest research I've been looking into the web 2.0 world to see if we can't find techniques, strategies and methods for managing IT and the business more effectively in a continually changing world. Of course, I already know that there exists significant competitive advantage in organisational design and the application of cybernetic management as was demonstrated through my successes, failures and experimentation with Fotango during '01-'07. The real question for me is how widespread have equivalent practices become and who is pushing the envelope with culture, organisation, ecosystems and a complex adaptive approach?

Some two and bit years later, the New York Times has published an article on "Needed at Microsoft: A Catch-Up Artist".  The article talks about how “Microsoft does have a financial problem, and it’s been the fear of losing those massive profits from Windows and Office” i.e. inertia and goes on to propose they need a catch-up artist.

When I wrote the above post in July 2011, these concepts and how to play them had been well established for many years (I personally had used the inertia of competitors as an advantage in Fotango in 2005 and Canonical in 2008).  Inertia is of course, highly problematic if a change is unpredictable (e.g. a change in value networks such as cable versus hydraulic excavators) and this will often lead to what is called "Disruptive Innovation".  However, corporate inertia is more than solvable if you are aware that a highly predictable and inevitable change is going to hit you.

Being disrupted by cloud (something which was predicted back in 1966) and was screaming loud in terms of weak signals in the early to mid 2000s is pretty shocking.  This is an issue beyond inertia (and denial) and it is better described as corporate blindness.

From my experience, corporate blindness is fairly rife. The impact can be reduced through mapping of a landscape or other mechanisms to improve situational awareness especially when combined with some understanding of economic play.  Whilst I like the NYT article, in today's competitive landscape just being aware of inertia and that your own success inhibits your future survival isn't going to enable you to compete against some of the tough players out there.

Oh, and don't get me started on OpenStack.

Microsoft seems to be really turning the corner, they've increasingly adopted a more open route and seem to be overcoming inertia. This is fabulous to see. They've a top notch CEO in Satya Nadella.

Tim Cook has done a tremendous job with Apple, rebalancing it to a more ecosystem focused future. Truly exceptional CEO in my book and up there with Jeff Bezos.

Oh, and don't get me started on OpenStack. What a wasted opportunity.