This is completely untrue.

When new things appear, we have historically tended to bolt on departments because our organisational structures are not designed to adapt. My current favourite example of this is the Chief Digital Officer but you could say the same about Chief Electricity Officer and other past transformations. Bolting on structures is a symptom of failure to build an adaptive structure. However, that is separate from my objection to bimodal & dual operating structures.

I'll go through my objections.

1) Practice. The concept of two extremes in organisations date backs to before 2002, and was noticeably highlighted in the Salaman & Storey innovation paradox.

Shortly after that time, I became CEO of a Canon subsidiary. I knew the single approach didn't seem to work well and so we tried a more dual structure in IT. What happened was almost warfare between the groups. The development group would create "new stuff" but the operational team wouldn't touch it because it was "flaky". It was not a happy time and after an initial promising start, things had rapidly degenerated into them vs us. Something was missing.

2) The Missing Middle. What was missing was the middle, the transitional stage between the genesis of something new and its industrialisation. To cope with that, we implemented a structure loosely based on Robert X. Cringely's 1993 book Accidental Empires which discussed the three different approaches. The terminology I use is Pioneers, Settler and Town Planners (PST). This worked and the problem had been the chasm between the groups was not only too big but by focusing on the extremes we had accidentally diminished the all important middle. I do mean all important - continuous and sustainable advantage comes from managing the middle not the ends. It seems that ignoring the process of evolution was not a good idea. Oh, and as with most of my work - yes, I've eaten my own dog food and by no means should you consider PST as the solution as no-one yet knows how to organise effectively and remain adaptive. You must accept that there is still some exploration to be done.

3) Spaghetti Junction. Whilst I had implemented the pioneer - settler - town planner structure almost a decade ago, spoken about it at many conferences, my focus in 2008 was diverted elsewhere - namely running strategy for Canonical. However, it was around that time I was asked to speak at an event where a large global company described their latest attempts to rebuild their "platform " because it was unwieldy. I was asked to have a look. The problem was simply they had built their platform with a dual structure and this inevitably leads to the never growing platform and spaghetti junction. I've written more about this here and it is something I've come across several times. It doesn't matter how good your technology is it won't fix your structure. Personally, you should focus on building a cell based structure first as per Haier or Amazon and worry about managing attitude later.

4) Ring fencing. More recently I've seen dual operating structures used as an attempt to ring fence change. In this case, you've got a very operationally run group (often with a non strategic CIO) and there is concern over the threat of this "new digital" bolt-on. The solution is seen as dual structure which is basically a way of saying "you digital lot can play with your crayons over there, don't disturb us". This is not healthy or helpful when faced with an evolving industry and just helps reinforce inertia.

5) Legacy. To compound things people having started to confuse "legacy" (which really should be called toxic IT) as being the role of one group. Not only is this dangerously misguided as to what legacy actually is and how co-evolution causes it (it can appear at different stages of evolution, more on this here) but now you are emphasising one group as the "future new" and one as the "past old". You might as well call them Eloi and Morlocks and give them axes. You're also in danger of highlighting one group as more important when in reality you need brilliant people in all. Furthermore you've buried the all important middle.

There is absolutely nothing good I can say about dual operating system structures as a universal doctrine. Not even as a transitional model. I hold a view based upon experience, practice and an understanding of the principles of evolution that such dual structures are over simplistic thinking. If you want to transition then go cell based first (e.g. Amazon's two pizza, starfish) and deal with attitude later. I'm quite convinced in this meme copying world that lots of companies will still jump on this as the solution and I suspect that some people will try to use it to prevent change to their empires. In my opinion, neither is good for the future welfare of an organisation.

I do know there are potential ways to use a dual structure but these require very high levels of situational awareness, are highly context specific and need the removal of one aspect of organisation. This is far beyond the reach of most.

So certainly organisations have historically tended to bolt-on departments for innovation but this is not new. The polar extremes in an organisation is also not new. Even organising by the extremes and the failure it causes is not new. In reality, it's so not new it's a decade old.

But that won't stop Gartner from promoting bimodal, the "new" (old) hotness and I'm mindful that if they said "The secret was to tie a yellow ribbon around the old oak tree" then some would empty Amazon of stock. They have their adoring fans. When they stuck to technology analysis, producing MQs and hypecycles (which are just aggregated opinion not some scientific measure of physical property btw) then I also generally found them harmless and occasionally useful. This new venture of theirs, I don't view in the same light.

As for Gartner's view that you have to "Go bimodal or go home", well I view this as reckless promotion. Also trying to link this particular form of structure with a technology evolution (e.g. cloud) is very questionable. Yes, organisations are needing to evolve and there is specific phenotype that is emerging that is caused by the underlying evolution of technology. I wrote about this many years ago, and for reference this is the result of that population study published to LEF members in 2011. 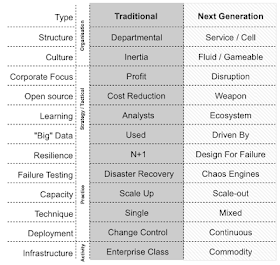 Now whilst the phenotype had companies gravitating towards mixed methods (rather than single) - the agile vs lean vs six sigma debate is rather past its sell by date - the structure was firmly heading towards cell based. Very rarely were companies considering attitude (as in the need for pioneers, settlers or town planners) and certainly I found no examples of companies promoting organisation by extremes and only rare mention of a concept such as "two speed IT". Hence I am highly suspicious of bimodal, I would have expected some references to organisation by extremes to have emerged even in those early days especially when the other phenotypic changes were so strong.